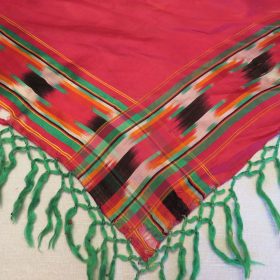 Schwalm women wore neckerchiefs with their festive costumes. These square cloths were made of pure silk.

The neckerchiefs of young women were often very colourful reflecting the basic colour of the costume.

Fringe made from silk threads knotted at the edges was common.

The bundled threads of the fringe were knotted at least once again,

The square cloths were folded diagonally. The established triangle was laid in the back.
Depending on how the cap bands (subject of a future article) were worn – in the back or in the front – the ends were either inserted in the front at the waist between skirts and apron

or wound around the neck, crossed over in the front, and knotted underneath the triangle in the back.