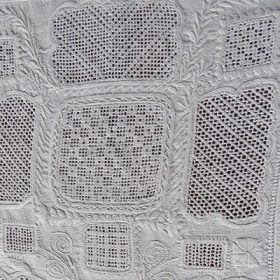 Some time ago I was allowed to view an extraordinary tablecloth. I want to share that experience with you. The tablecloth was made by piecing together several parts. And it seems that the single sections came from different old pieces. Only elaborately embroidered sections were cut out and recombined to establish one new piece. 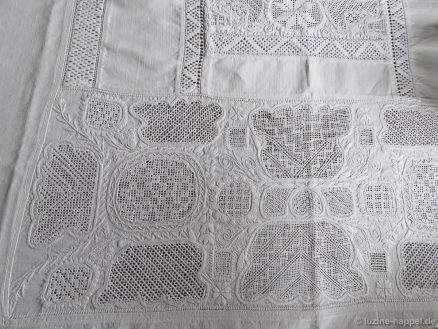 Arguably the largest sections originate from about 200-year-old parade cushions – the width of the borders is consistent with those of parade cushions – however, the two similarly embroidered borders were worked by embroiderers possessing different levels of experience. 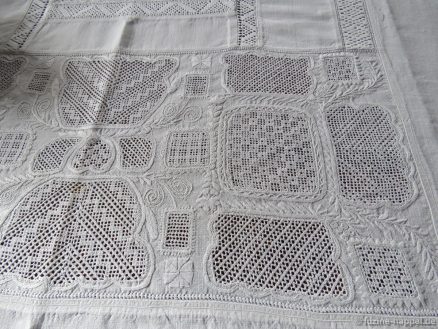 Between the wide borders there are smaller borders 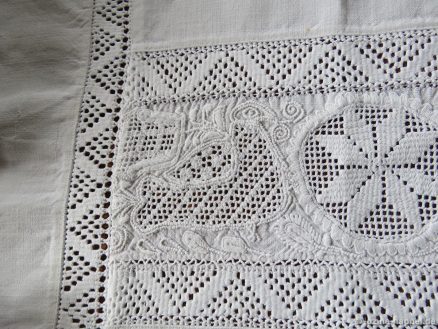 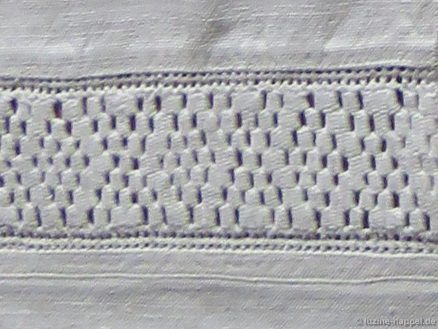 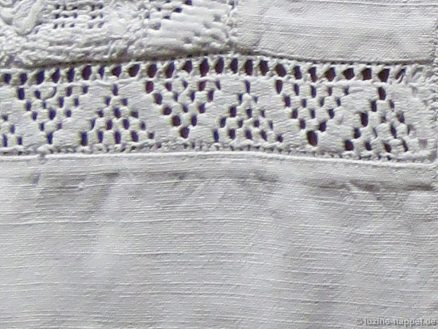 and in different widths. 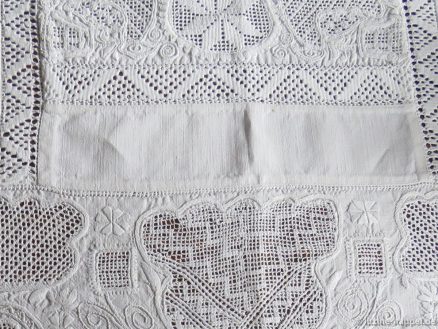 The main focus is the parade cushion borders. Even though the pieces are not in their original condition, so many details of the embroidery of those days can still be seen in them. Interesting discoveries can be made. 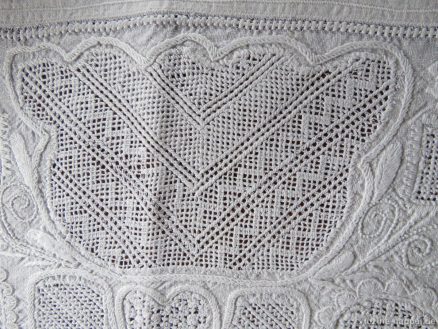 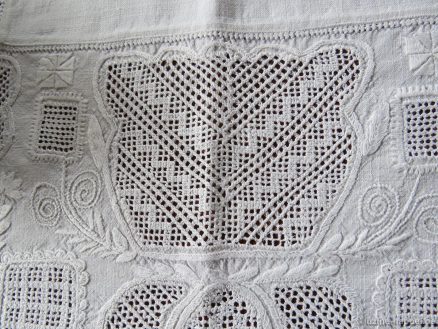 all are embroidered with similar patterns 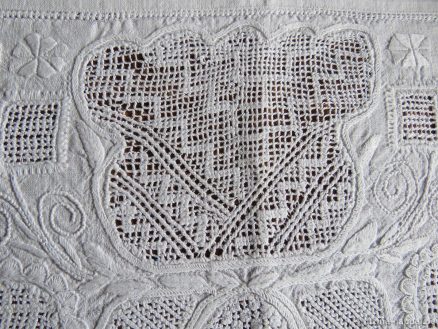 but show definite differences in the embroiderer’s skill.

The other motifs, some of them also very large, have less conspicuous patterns. 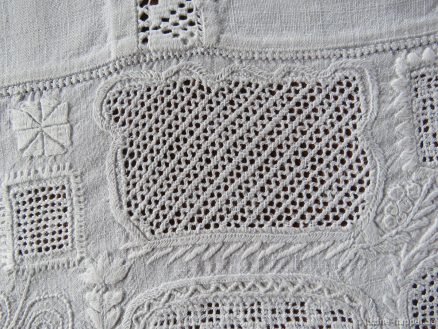 Unusual are the many angular shapes, which were designed in different sizes. 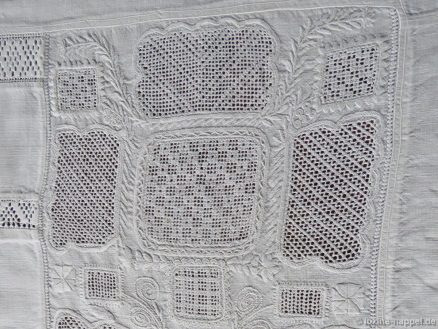 Openwork patterns were used exclusively for filling the shapes. 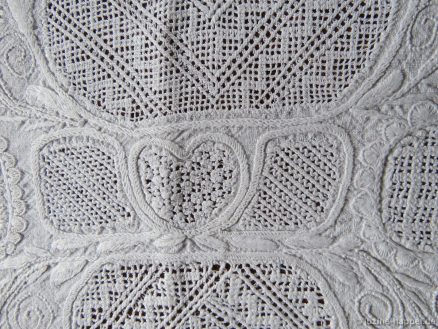 Many motifs are outlined with long, closely worked and slanting Eyelash stitches. In addition, knife points, 2 short-2 long, and 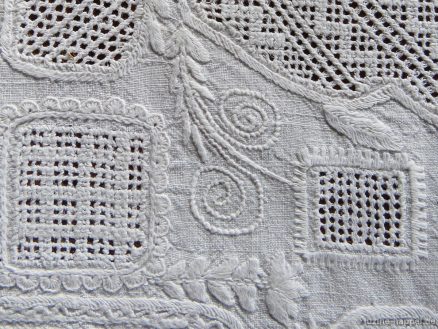 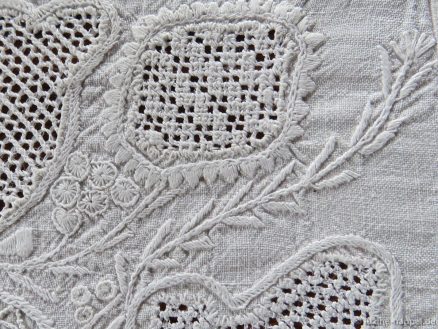 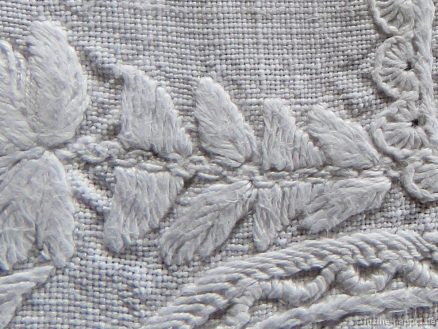 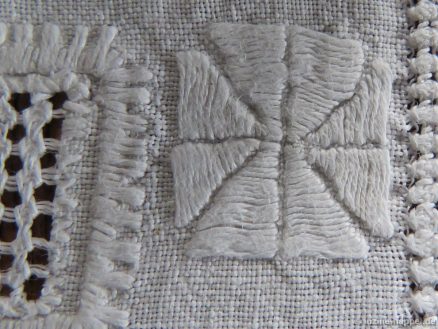 It is unique that thread withdrawing in the shapes was not made up to the edges. The cut edges were subsequently secured with Whip stitches. 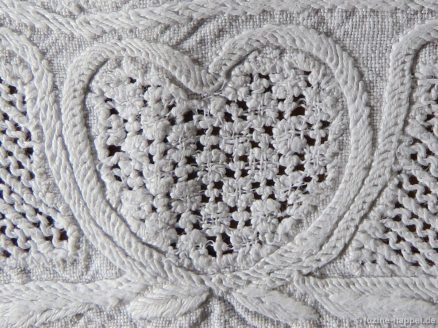 Most interesting is the pattern of the heart motif (image above). It is an openwork pattern without a Cable stitch grid. Four – apparently only partly worked – Rose stitches were worked to form a square. Those squares were worked like a checkerboard over the entire shape. One Four-Sided stitch was placed in each remaining section. I tried to replicate this pattern; I will share the result in a future article.
In contrast is the similar, but common, pattern (image below) of the counterpart. It was worked with squares of Rose stitches in a Cable stitch grid. 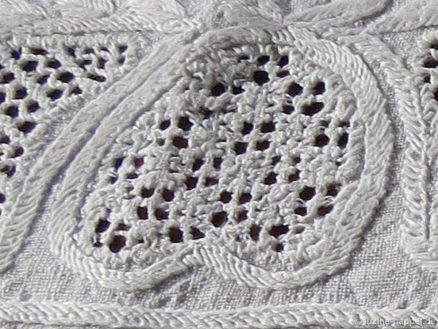 I hope you have enjoyed examining this very peculiar and individually developed embroidery. It is truly something that cannot be seen every day.

This is just the type of research I love to share with you. If you find it useful, enlightening, or simply enjoyable, please consider making a small donation to support the continuation of my blog.