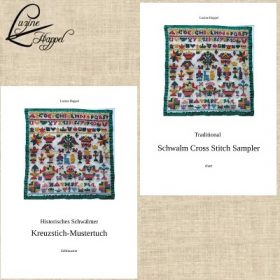 In the Schwalm, Cross stitch was used to complete whitework – to mark the the linen with initials and years, to separate initials with small square ornaments, to round out grand Satin stitch crowns with small embellishments, or to develop single-stitch crowns.
Some examples are found in my articles “Historical Schwalm Whitework and Machine-Made Lace” and “Schwalm Costume – The White Aprons”.

Besides letters, numbers, and different small square elements; hearts, tulips, and small crowns played a major role. Baskets, stars, and trees of life were also represented. But there were also other embroidered elements that were important in the daily life of these women. Most important were the many different bird motifs.

Because of their motifs, Schwalm Cross stitch samplers are different from samplers of other regions. 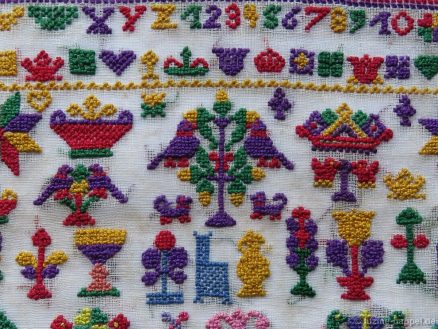 I succeeded in finding a very special – because of its especially colourful palette – traditional Schwalm Cross stitch sampler. And I would like to share it with you. The small cloth measures 28 cm high X 29 cm wide. The sampler’s stitch count is 168 wide by 137 high. It was worked on loosely woven linen with 13–14 threads per centimeter.

Presuming your interest in embroidering, I made an enlarged, clear, and coloured chart – divided into 30 sections.

I tried to find the original colours, but not all of the old colours are available today. I have included both Anchor and DMC colours that match the closest. A complete chart with a foldout colour key can be found in the back of the booklet. 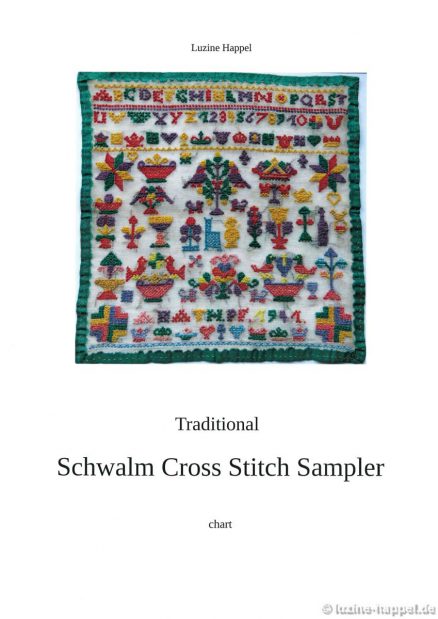 Is this sampler missing from your collection? No problem, you can order it now. The document is available as a file for downloading.