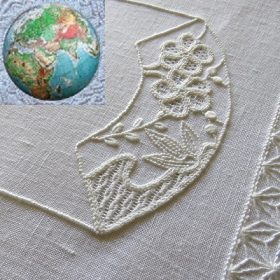 Today I can present five new contributions to the global sampler.

#15
Taeko Ueki from Japan is currently learning Schwalm whitework from Yasuko Kobayashi. She was very happy to be involved in a joint project during these times and to be accompanied by her teacher. She chose a fan (the typical Japanese Sensu) and filled it with typical Schwalm motifs.

“By the way, this motif is Sensu (folding fan in Japan-taste) and arranged-designs of yours.
As Sensu spreads out wide toward the end, we Japanese consider it as a symbol of good luck.” 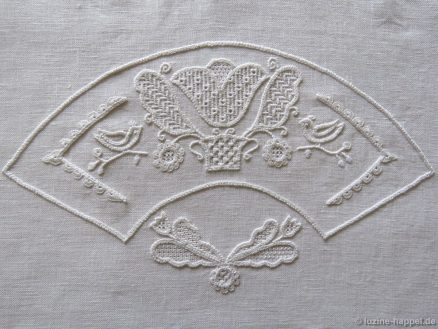 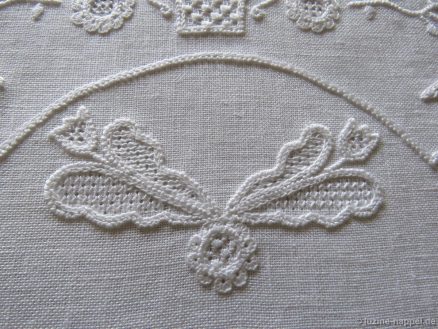 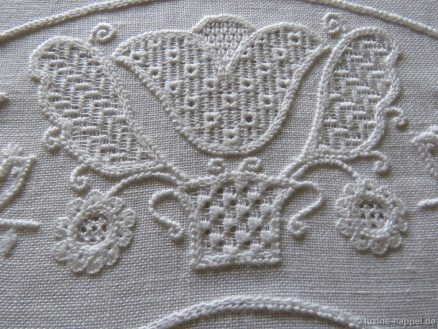 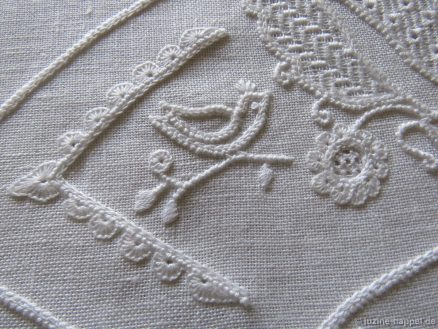 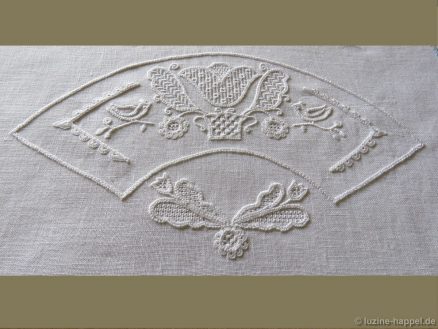 #16
The teacher Yasuko Kobayashi from Japan chose her favorite motifs (asanoha and sensu) and arranged them opposite. For her they stand for cohesion in order to get through the days with COVID-19 better.

“I select some favorite designs in order to pull ourselves together and also to get through these days with COVID-19.

The motif “flax-leaf ” is the symbol of long life. (Hemp was in the past more popular than flax.)

The motif “Sensu (= folding fans)” looks like delta and it is the symbol of good luck. I have arranged with “flowers of plum and bamboo leaves”, which are the traditional New Year’s items.

Tendril is one of the typical Schwalm motif, which can naturally be connected with Japanese motif.”

(note: Asanoha (hemp leaves) pattern
Hemp has played a much greater role in Japan than flax [linen] in the past. Hemp flowers were used in Japan in ancient times, among other things, for oil production. Above all, hemp bast was used for centuries as a raw material for textiles, along with silk, until the cotton came to Japan and replaced hemp as the most common textile. Until the end of the Second World War, hemp cultivation took up as much land in agriculture as rice cultivation!) 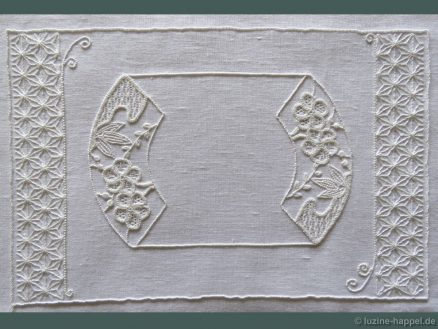 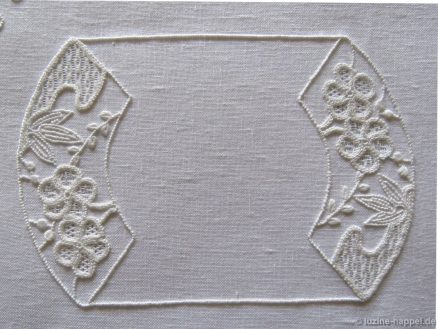 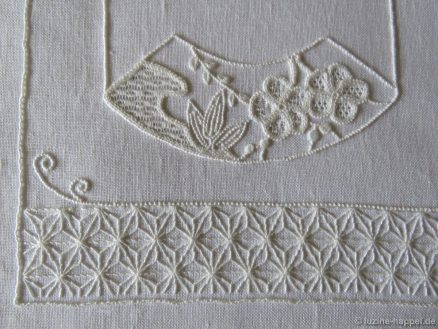 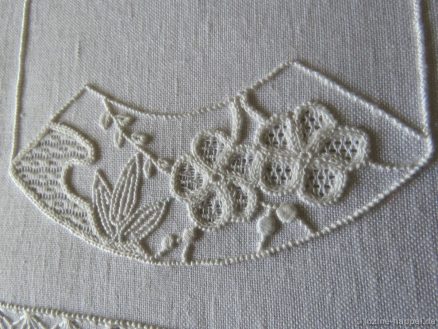 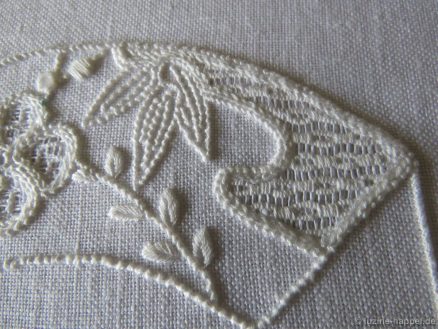 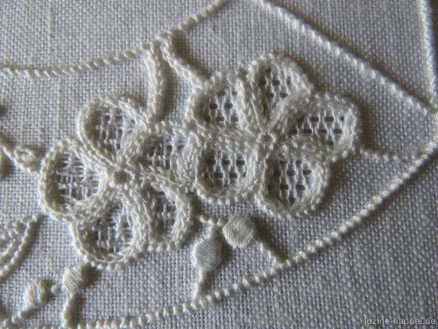 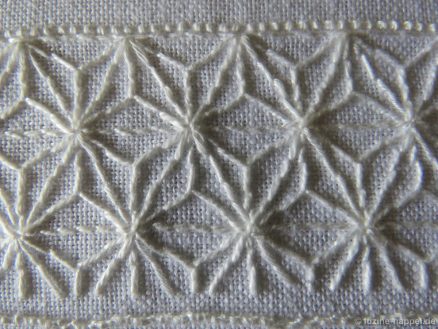 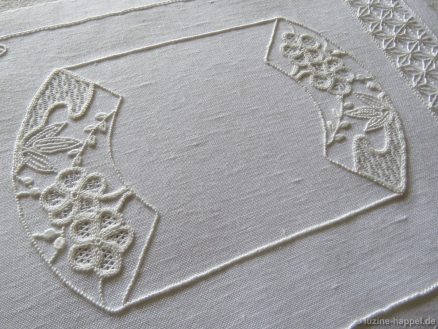 #17
Jennie O’Brien-Lutton from Australia has chosen a native bird, the Kookaburra, as her motif.

She wrote: “My inspiration from nature is a kookaburra sitting on a gum tree branch. Both are a very common in many parts of Australia. Kookaburras and gum trees feature in Australian poems, songs and paintings and I´ve always had a particular liking for kookaburras. As soon as I had decided to embroider a kookaburra, I heard one laughing in a tree next door. Coincidently, some days later as soon as I started to stitch, I heard a kookaburra laughing again. The kookaburra is sometimes called Laughing Jackass (der lachende Hans). I hope very soon Covid19 will be under control, we´ll be allowed to socialise and all the world will be laughing with the kookaburras.” 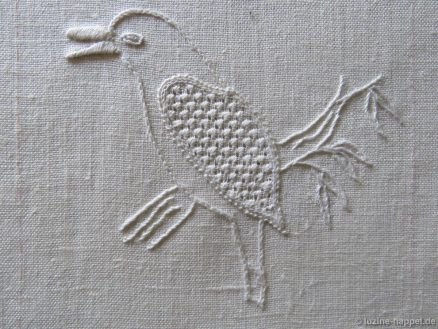 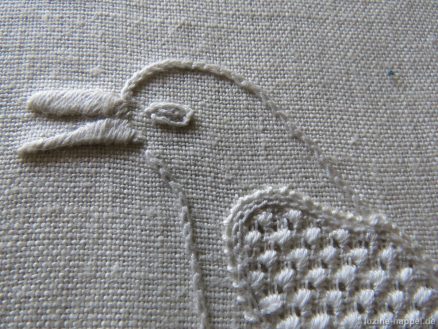 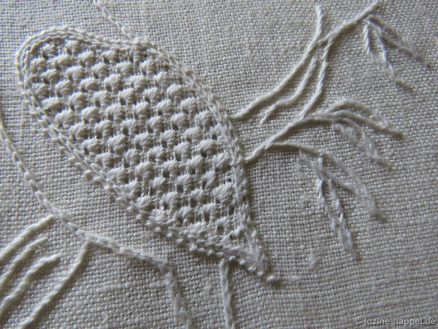 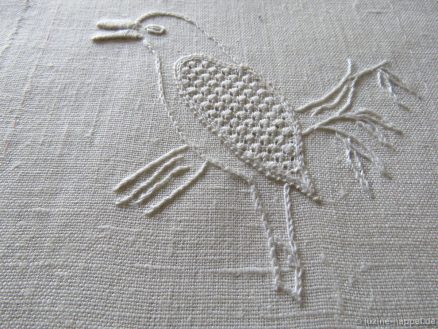 #18
Monika Müller from Germany often skillfully converts individual ideas into elegant embroidery; she has done so again with this submission.

She wrote: “I took nature “literally.”
The tulip symbolizes the flora, the bird symbolizes the wildlife. Plants and animals are nature. For me, nature is valuable. That’s why you should be careful and respectful of it.”

#19
Margrit Michaux from France justified the choice of her motif very charmingly.

“I chose the butterfly. He’s a little like me – loves freedom, stands where he wants and loves air and beautiful flowers!” 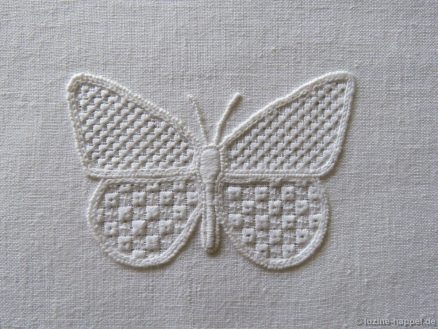 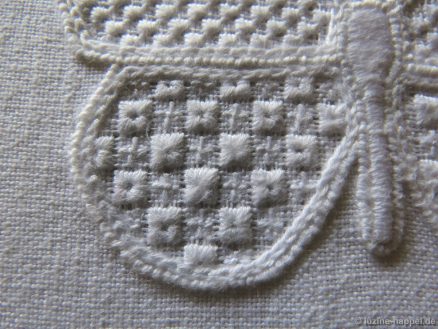 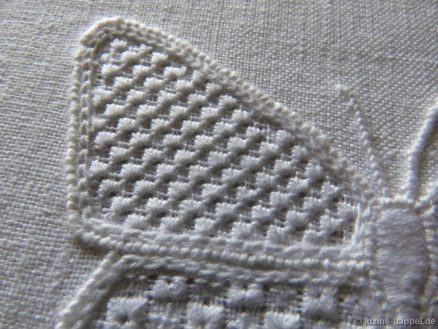 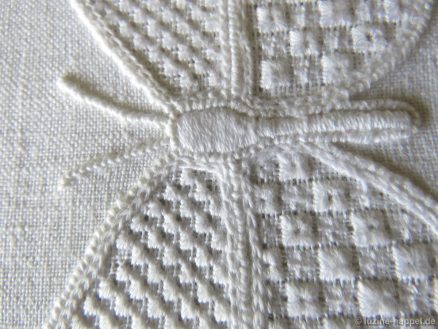 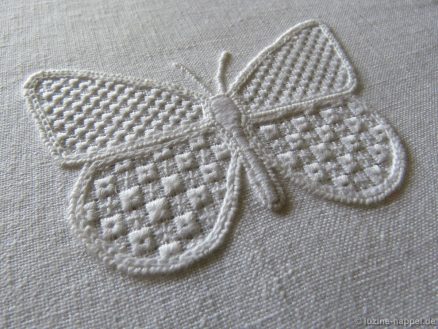 You can see more contributions in Update (7).