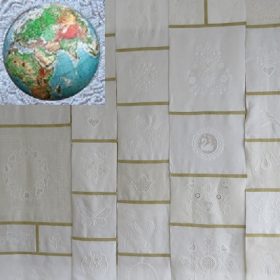 I also have to make decisions when putting the last column together. An embroidery with a leaf motif measures 26 cm x 25 cm. In my opinion – and I also think the embroiderer feels the same – the leaf should be arranged with the axis rising from left to right. That would mean a width of only 25 cm is available for this column, and all other embroideries would have to be reduced to fit this width. 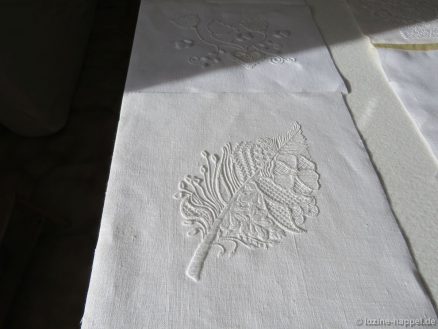 But then I would have difficulties with other pieces that do not allow for my cutting away any additional fabric. 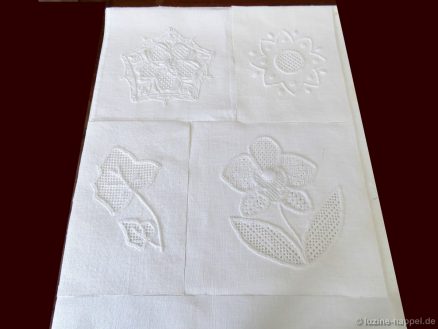 So I decide on a width of 26 cm and place the leaf motif with the leaf axis rising from the bottom right to the top left. 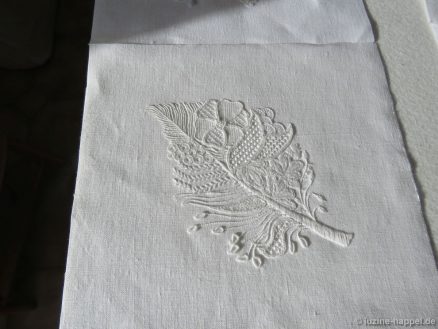 There were a few other things to consider as well. And once I didn’t pay attention and sewed on a motif upside down! Fortunately, I quickly noticed my error and so only one seam had to be reworked. Finally, the last column was ready.

Now the big moment came: all the columns were carefully attached to the wall with pins 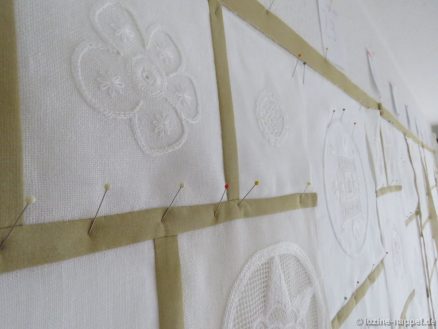 to get a first impression of the overall picture. 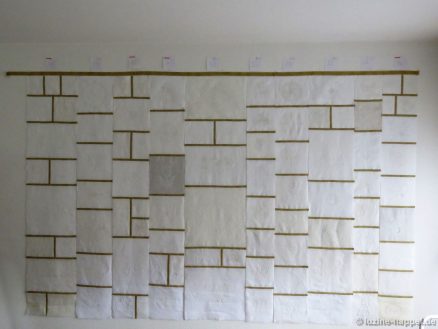 Of course, the white background is annoying and the lighting is completely inadequate, but the structure is easy to see.

With a coloured background fabric temporarily placed behind, the details stand out much better. 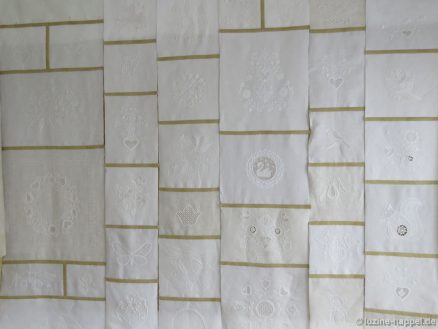 The widest column is arranged in the middle. To keep the areas to the left and right of it the same size, five narrower columns had to be arranged on one side and four wider columns on the other. The missing vertical strips still make the right side appear less subdivided.

In order to get a better visual impression of the final overall picture, the sampler image was edited to include vertical lines 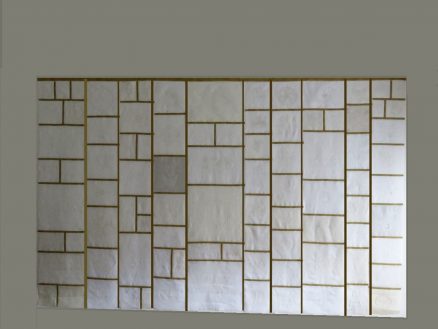 and then also a border around it. 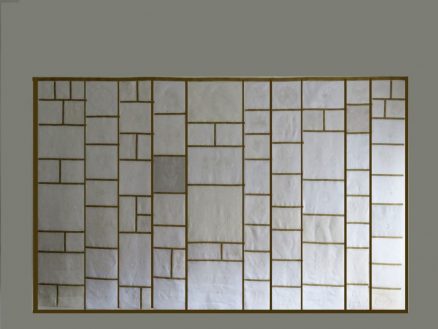 That changes the impression enormously. (The subdivisions look somewhat crooked because the columns are not yet connected to each other. They have only been attached at the top and so turn slightly towards the bottom.)
I’ve tried to fit all 92 embroideries seamlessly into the rectangle, and in that I’ve succeeded.

I tried to either let the horizontal connection strips of the individual columns line up with those of the adjacent column or to give them a clear offset. And I strove to evenly distribute large and small embroideries as well as the different colour nuances and motifs. However, it was not always possible to achieve all my self-imposed requirements at all times.

The arrangement of the individual columns is checked once again: the image printed and cut into strips gave the impression of a different possible order. The result: the arrangement remains as it is! 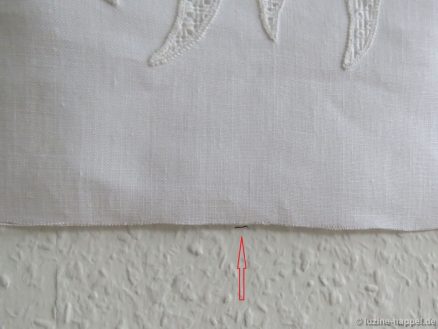 In order to test whether the individual columns stretch due to their own weight influenced by the different fabrics, I made a small mark on the wall at the bottom of each column. After several days I could see that none of the columns had stretched even minimally.

So I can now sew the columns together without any further worries.