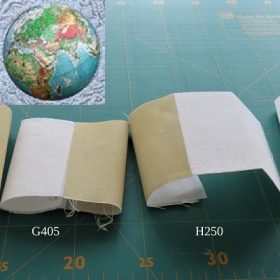 Now the strips with the border text are also ready – embroidered, boiled, and roughly ironed they are waiting for further processing. 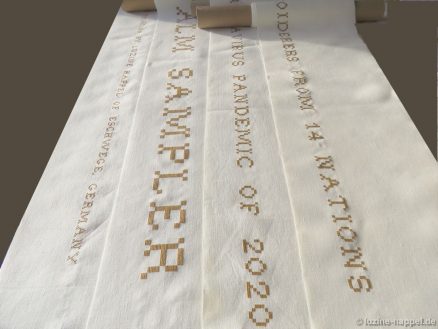 In order to make the edge of the large sampler stiffer and more stable, I want to underlay the fabrics used there with thin fusible fleece.

Grit Kovacs kindly provided me with four different qualities for testing. I wasn’t even aware that there were so many very different types of non-woven fusible interlining for this purpose. Now I could thoroughly test them.

All qualities are from Vlieseline, a brand of the group Freudenberg Performance Materials. 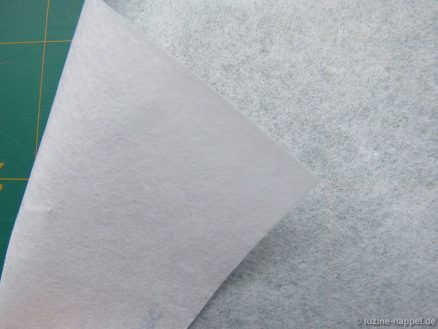 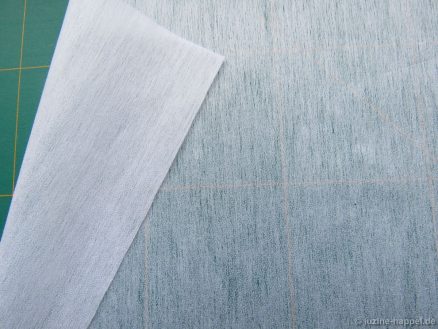 Fusible interlining G405
Fusible fleece G405 is just as thin as H200. It has a very soft feel. Similar to the H200, the fibers tend to run in one direction. The fixing layer is applied in tiny dots. It is washable up to 40 degrees. 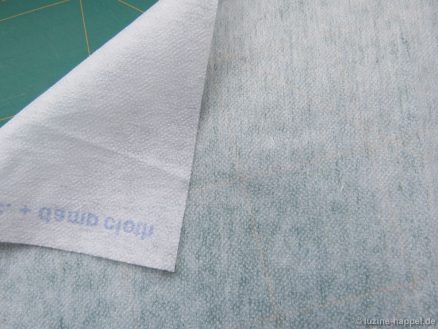 Fusible Woven interlining G700
Vlieseline G700 is a heavy-weight, fusible woven insert made of pure cotton. The feel is not quite as soft as that of G405, but it can still be described as soft. The barely visible fixing layer is applied over the entire surface. 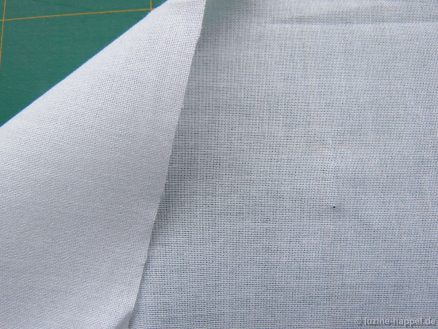 For my test series, I cut four pre-washed pieces of the materials (cotton and linen) used in the sampler and ironed on the different fleeces. With the cotton fleece G700, this also worked without any problems at a slightly higher iron temperature. There were difficulties with G405; the temperature had to be lowered.

The adhesion between all interfacings and the fabric are stable. 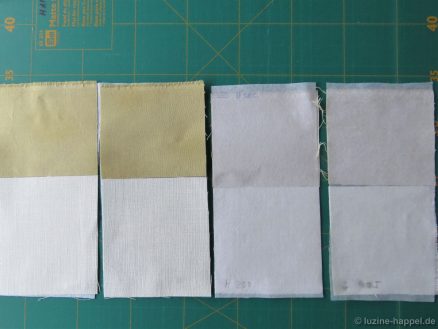 First, I folded each fabric once and smoothed out the folds with my fingers. With H250 the wrinkles popped open again immediately. It was similar, but not quite as pronounced with H200. In G405 the folds remained the best. G700 brought a medium result. 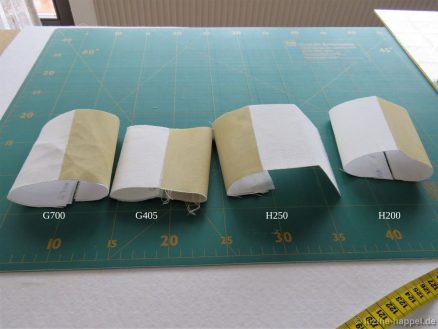 Then I did a crease test by crumpling the pieces together using the same force and for about the same time. 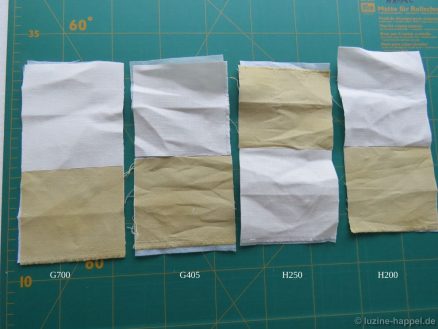 During the subsequent ironing, the creases in all the cotton fabrics disappeared more easily than in the linen. G700 (because there were fewer creases beforehand) performed best here ahead of H250. 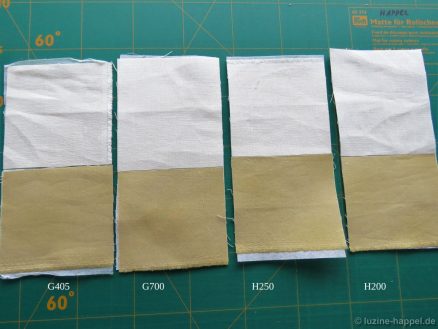 A stretch test showed that G700, G405 and H200 – with decreasing intensity in the order of the items listed – are slightly stretchable on both the diagonal to the grain 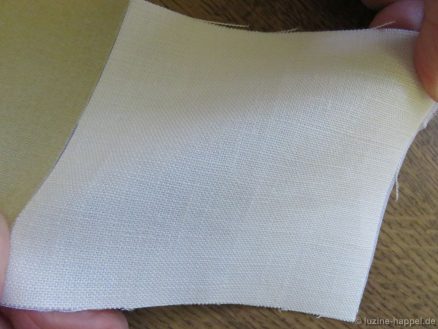 and along the grain. Only H250 was fully stable. 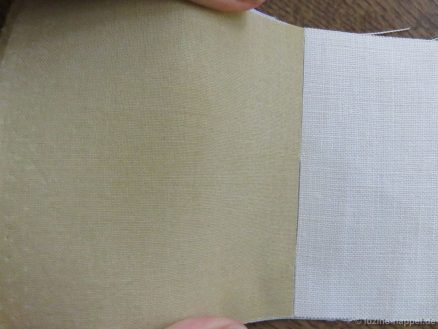 A final wash test should bring final clarity, even though laundering later will be only a very minor concern.

To do this and to better identify changes, I cut the test strips into two parts and only laundered one part each.

After washing in a little more than lukewarm water and drying them flat, all qualities, except G405, wavered – especially in connection with the linen. 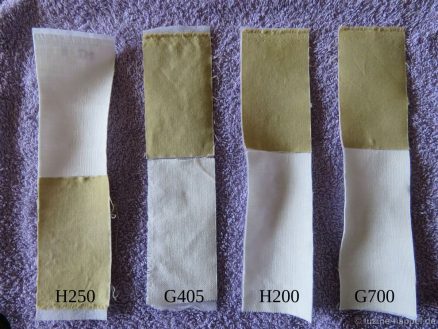 and H250 showed bumps, especially in the area of the linen. 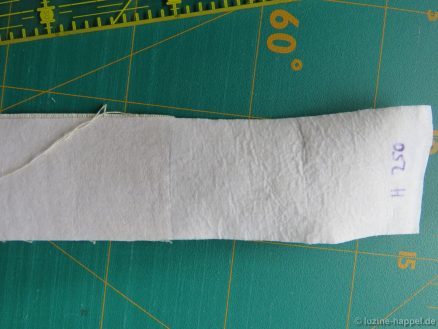 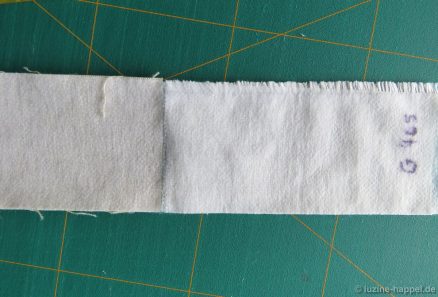 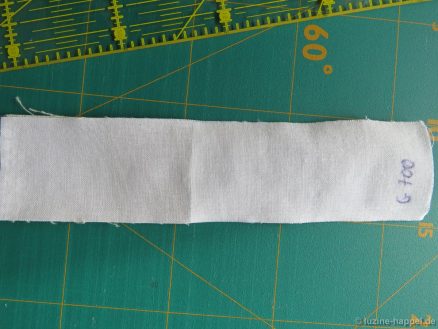 After ironing at medium heat, the surfaces of the H250 and G405 were smooth again, while the H200 and G700 remained slightly wavy in the area of the linen. 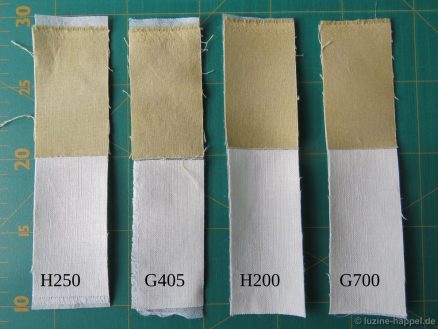 H200 and H250 showed no shrinkage, while G700 suffered a minimal amount and G405 (picture below) a clearly visible amount of shrinkage. The cover fabrics had already been boiled beforehand and thus were pre-shrunk. The current shrinkage is therefore due to the fleece. 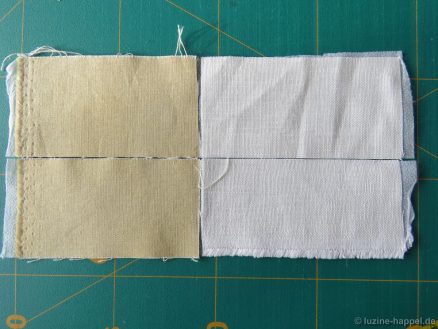 G405 showed a clear tendency to detach after laundering, 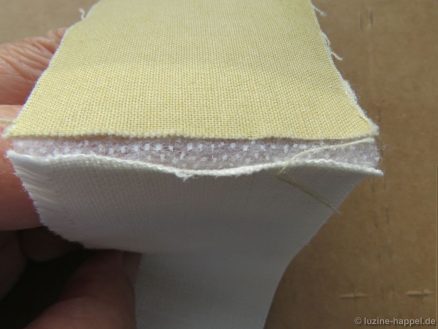 which was also observed to a weaker degree with H200 and H250. Only the G700 remained fully adhered. 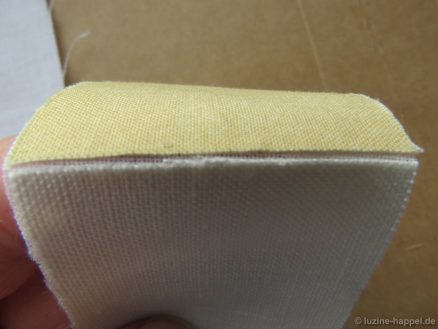 Taking all these test results into account, I decided to use the G700 woven cotton fusible interlining for the sampler’s edges.