An Old Traditional Method for Transferring Designs onto Linen 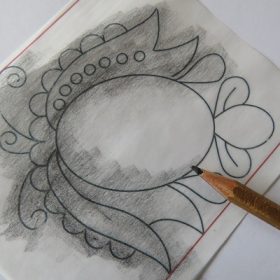 An Old Traditional Method for Transferring Designs onto Linen

Some time ago, an embroiderer enthusiastically told me that she accidentally discovered a detergent that easily removes pencil marks from white embroidered linen without leaving any residue.

She uses an old method for transferring the design outlines of her embroidery projects: using a #2 pencil, the design paper is blackened on the back side in the area of the outlines. With the blackened side positioned on the linen, the outlines are traced using a pen with a strong point (old pen or embossing pen), and thus it is transferred to the fabric.

This method has been in disuse more and more because the pencil lines have been very difficult to remove. Could there now be a remedy with a special detergent?

This method of design transfer sounded interesting. And since one only needs things that are normally close at hand anyway, I decided to test it.

At first I approached the matter a little tentatively and perhaps a little light-handedly. On the back of the tracing paper on which the pattern was printed, I slightly blackened the line areas with an #2 pencil. 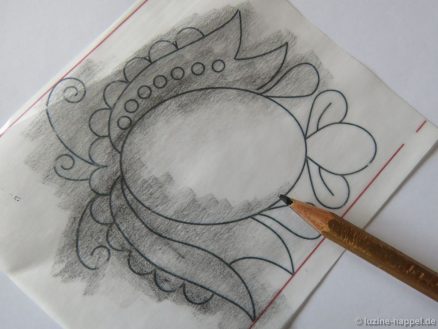 With the blackened side down and using removable adhesive strips, the pattern is attached to the linen in the desired position. The outlines are transferred by tracing them firmly with an embossing tool or old pen (with no ink). 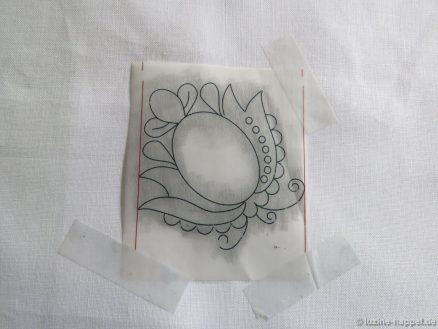 After removing the template, one can see that the outlines are recognizable but very weak. 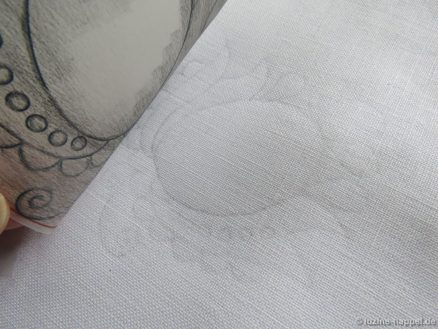 But you can now easily trace over them with a #2 pencil. 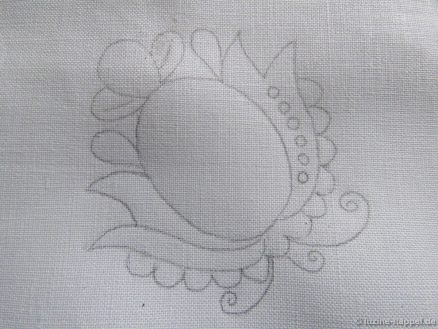 If there are any flaws, you can simply erase those lines with a soft eraser. 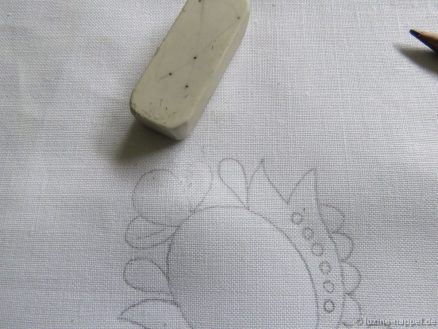 Any eraser “crumbs” can be removed with a toothbrush. 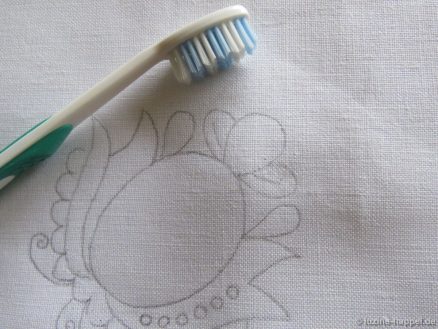 I embroidered the pattern, even worked the filling pattern first, to see how long the outlines would last. They were easily recognizable to the end. 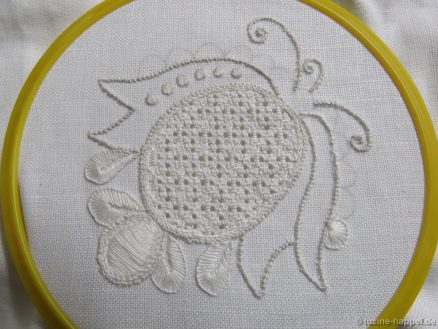 Nevertheless, I retraced the remaining lines so that I could better see whether they were actually being removed during the wash. It can also be clearly seen that the Coral knot stitches have absorbed the pencil marks quite a bit. 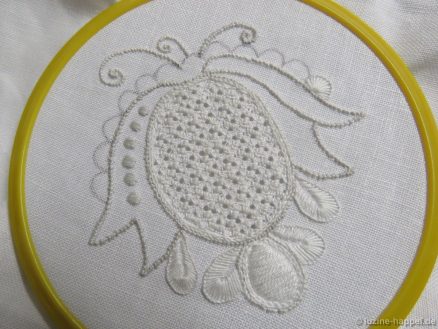 In the next post I will report how the pencil marks can be removed.

Since not everyone has the desired design outline on tracing paper, I did another test. This time it was printed on regular printer paper. With the design lying on a white background, one can see the lines on the back. 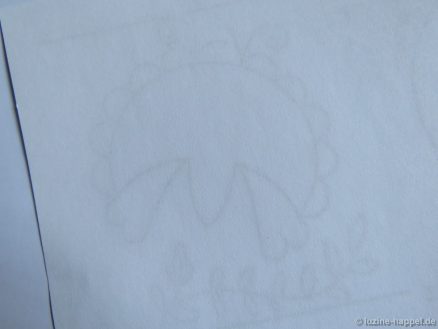 One can also hold the paper against a window or light box ­– then the lines can be seen much better. 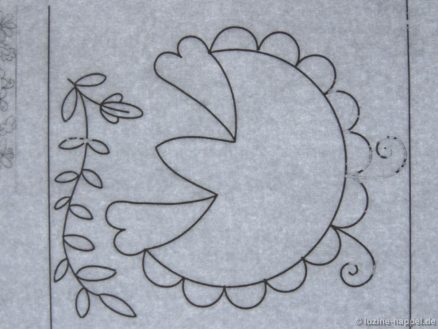 The paper is blackened on the back side in the area of the outline. This time I wasn’t so tentative. 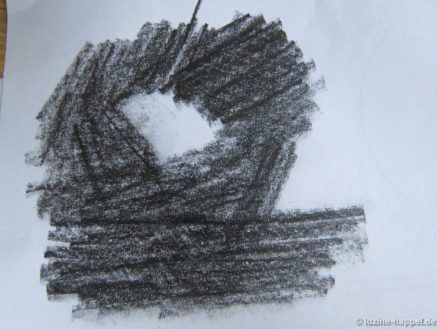 With the paper correctly positioned with the blackened side against the linen, the transfer begins with a pen – here with an old ballpoint pen empty of ink. I transferred the left side of the semicircle on a hard surface, the rest of the pattern on a slightly softer surface. Work was more pleasant on the latter. 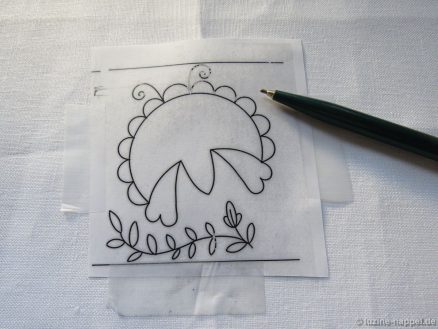 After removing the template, one can see that there were hardly any differences in the intensity of the lines – all of them are clearly visible. The lines transferred on the soft surface are, however, more rounded. 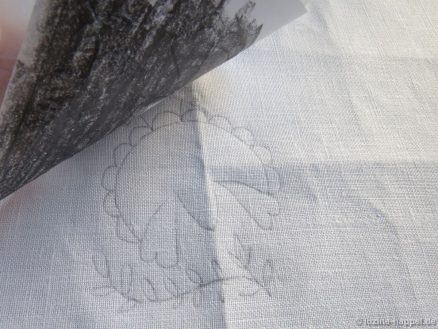 The lines do not have to be redrawn – at least for the time being. One can start embroidering right away. This time, however, some lines had to be touched up during the work because they threatened to fade too much. 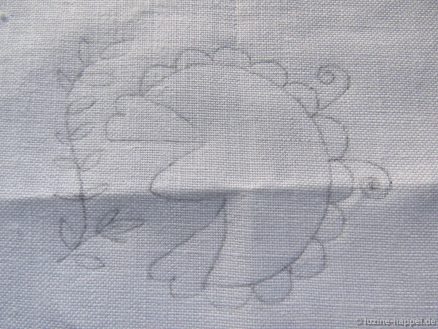 However, there is still a lot of pencil residue – especially under the Coral knot stitches – as can be clearly seen in the picture of the embroidery lying in the washing water. 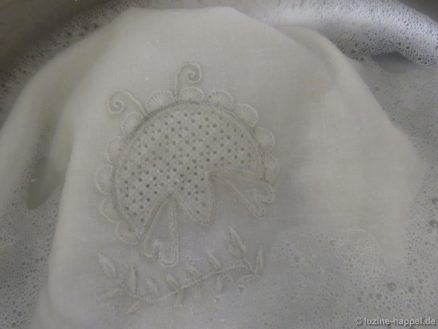 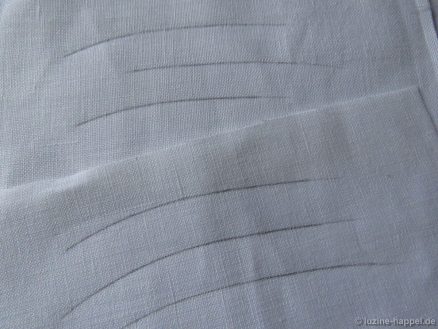 and some of the lines are embroidered with Coral knot stitches. 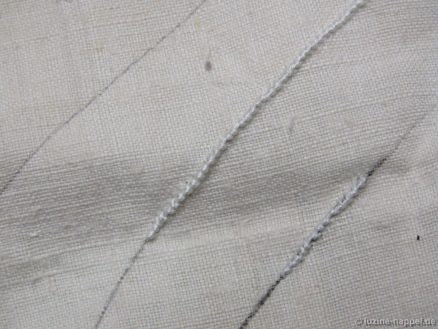 Will they be easy to remove?

You will see the results in next week’s article.