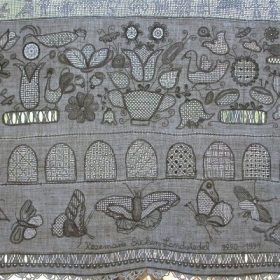 The painter Rosemarie Landsiedel-Eicken from Korbach put brushes, paint, and canvas aside for several years to create works of art with needle, thread, and fabric. 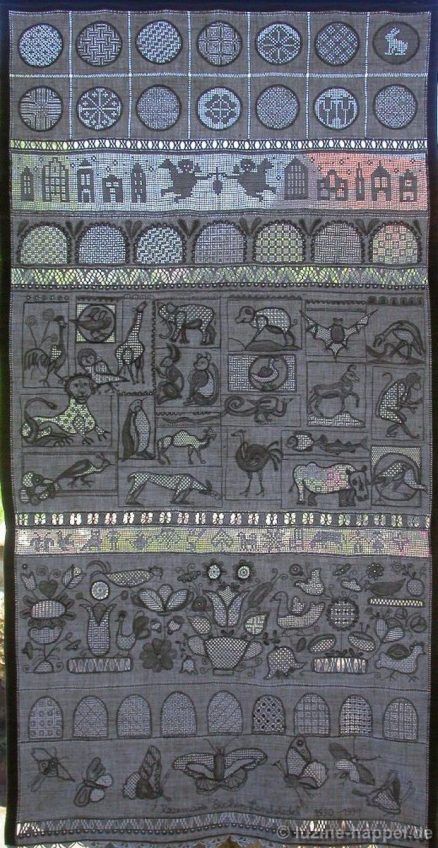 In fact, her fabulously grand sampler was the inspiration behind the Global Schwalm Sampler. When putting forth my proposal I could only show a superficial picture of her project.

Now I have been kindly provided with detailed images with the permission to show them on my blog.

In her wall hanging, Rosemarie Landsiedel-Eicken has recorded a huge selection of pattern options that Schwalm whitework offers. 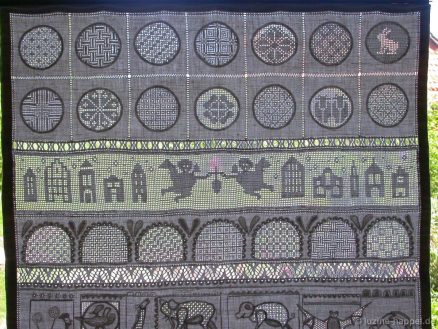 In the upper part, there are fourteen squares (seven per row) containing circular motifs. The squares are divided vertically by a hem with wrapped bundles and horizontally by a zigzag hem. The circular motifs are alternately filled with Limet and openwork patterns – repeating patterns can be seen next to figural motifs. 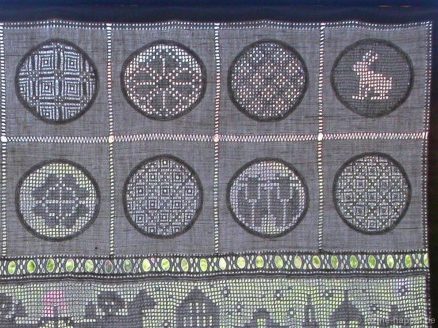 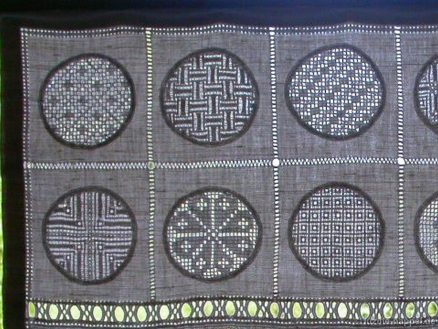 A “bean-hole” hem separates the upper area from the following border. Here a wide strip was worked with an openwork Cable stitch grid, into which houses, stars, and angels were woven. 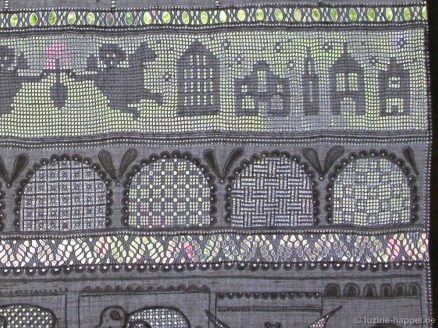 A border with seven semi-oval arches comes next The areas are outlined with Blanket stitch half-eyelet scallops and alternately filled with an array of Limet and openwork repeating patterns. Two leaves emanating from a Blanket stitch eyelet – arranged in a wing shape and worked with different stitches – fill the spaces in between. 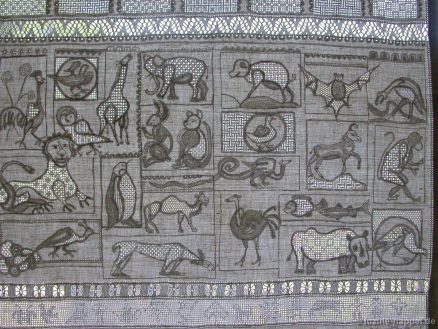 This area is densely embroidered with animal figures reminiscent of mythical creatures. 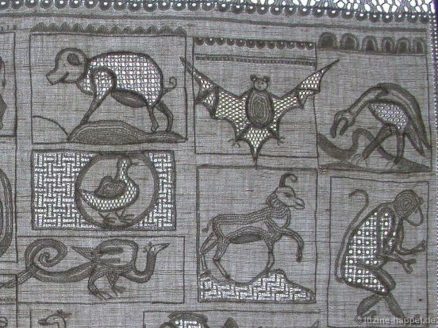 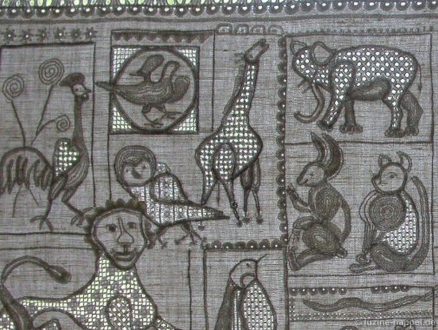 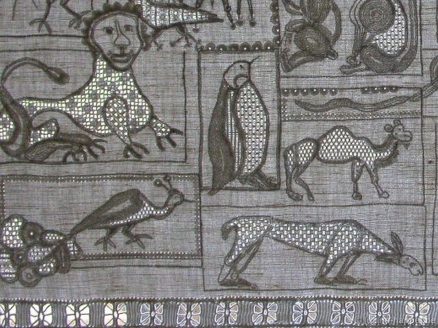 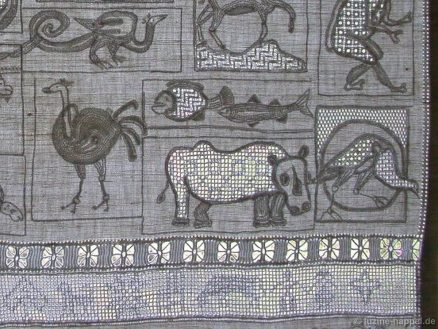 A needle-weaving hem with spiders separates this area from another band with an openwork Cable stitch grid. Figures were embroidered into this band with Rose stitches. Birds, chair, dog, cow, star, and others can be seen. 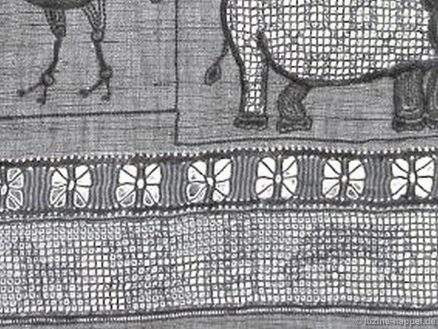 This is followed by a wide border, which, with its motifs and their arrangement, is reminiscent of traditional Schwalm border patterns. Many different tulips, flowers, and fruits that grow out of vessels, different depictions of birds were worked out with various filling patterns. 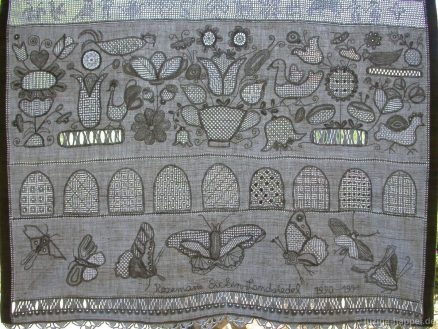 Many tendrils, small leaves, and flowers were arranged between the densely packed motifs. Different needle-weaving hem sections complete the picture. Needlelace fillings in the “suns” enrich the pattern selection with another element. 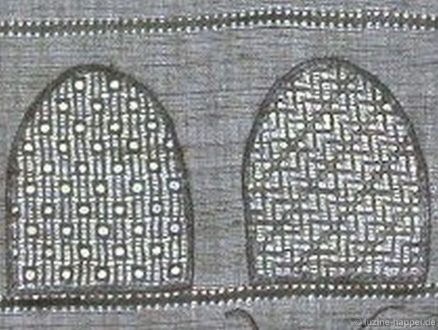 In contrast to this lively arrangement is the severity of the following border: Nine semi-oval shapes of almost the same size form this pattern strip, which looks like a row of arched windows. Again, more Limet filling patterns were embroidered into the areas. 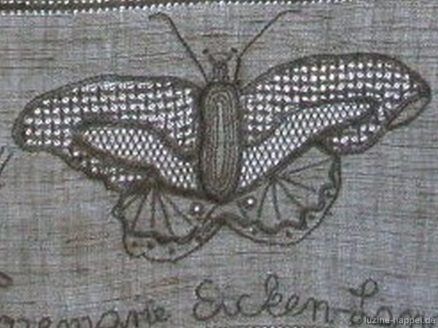 “Dancing” butterflies can be seen in the next section – large and small, with wings spread wide or shown from the side, expand the range of motifs. 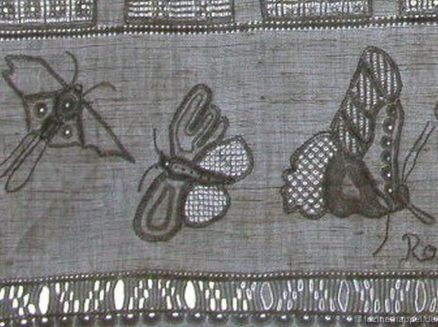 Finishing the butterfly border, there is a needle-weaving hem with a one-piece block pattern, bounded at the bottom by Blanket stitch half-eyelet scallops. And a needlelace edge completes the sampler at the lower edge. 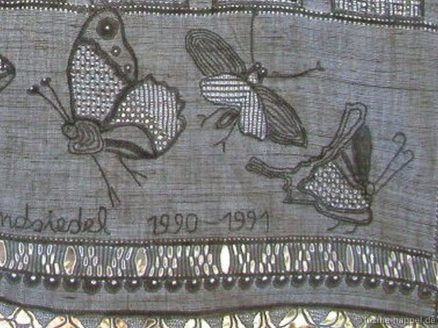 The years 1990 and 1991 are noted. In a relatively short period of time, a mammoth task was completed by a single embroiderer!