A Design for Many Different Filling Patterns 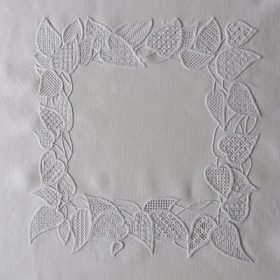 Ann Kennon from Australia is a member of the New South Wales Embroiderers’ Guild. She sent me a photo of her recently completed beautiful work. I was given permission to feature her embroidery on my blog because I think you too will be impressed by the choice of all the filling patterns and how they are assigned to the different areas. The distribution of denser and lighter patterns was very balanced and made the project a masterpiece. 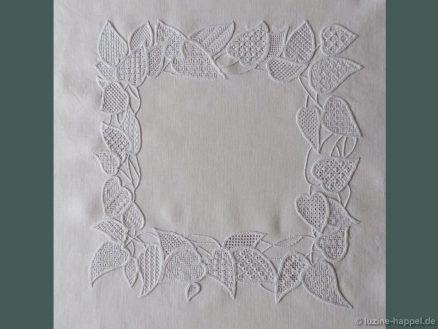 “In March last year I ordered and received from you a pre-transferred linen – a “wreath” of leaves. I decided to give myself a challenge and stitch a different filling pattern in each leaf. This, of course, meant that I had to find 38 different patterns. My books provided a number, but the filling patterns on your blog, and in the Roserich book I bought from you, were invaluable, and make up almost half of the patterns I used.” 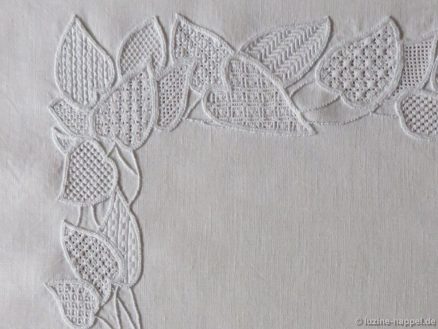 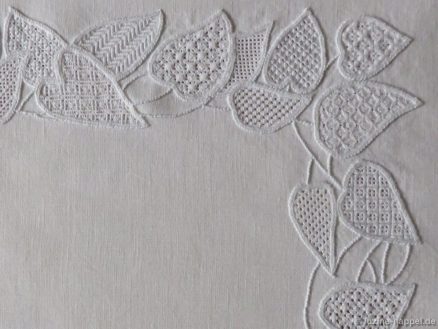 Can you figure out the patterns posted on my blog? 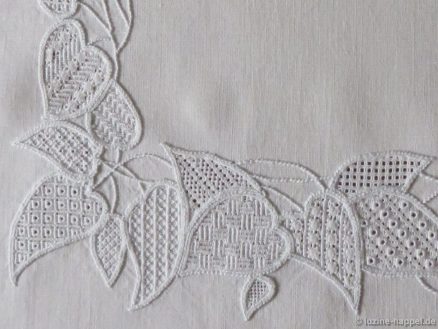 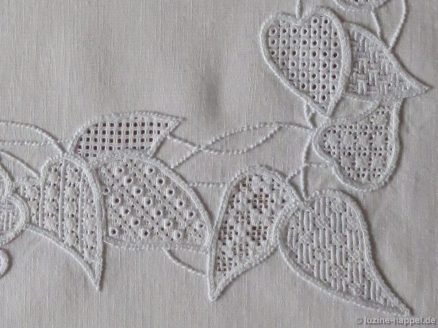 No traces of the blue outlines can be seen in the photos. Asked how she washed out the colour, Ann replied:

“I did find it difficult to remove the pre-printed design. First, as you had recommended in your blog, and using an appropriate amount of the washing powder you sent, I soaked the embroidery for 2 days, This made no impression on the pre-printing, so I took the fabric out, made up another similar solution with more of the washing powder and soaked the fabric again for another two days, with much the same result.  Having washed that solution out of the fabric, I then put it in a soaking solution using Vanish Napisan, which is an oxygen-based bleach (no chlorine).  After another 2 days the pre-printing was lighter, so I washed the first solution out, made up another and soaked the fabric again. After this there were only a few small patches where the blue was still showing, so I made up the concentrated paste recommended on the container. This was only to stay on the fabric for 5 minutes.  After the 5 minutes there were only small traces of the blue, so I washed the fabric under running water, then soaked it in clean water to ensure that all the bleach was removed. The traces are no longer visible – it all looks white.

It might have been better to put it in the Vanish Napisan from the beginning, but I don’t like using bleach (even the oxygen-based one) if normal washing does the trick.“

I am aware that unfortunately it is difficult to wash out the pre-printed outlines. In the meantime I have used many contacts to find out if there are better options. I learned from French embroiderers who use other powders to print their designs that they also use sodium percarbonate (= the main active ingredient in many household detergents with a bleaching effect, which are advertised with terms such as “active oxygen” or the prefix “Oxi-“) to remove the colour of the lines. They also told me about their experience that washing out becomes more and more time-consuming the older the outlines are.

At the moment I am testing different powder compositions for their durability and washability. I will report the result later.