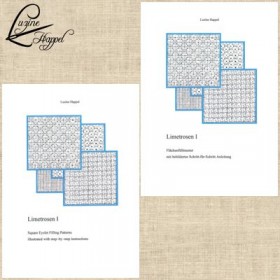 Every time I stitch a pattern, I consider how to rearrange stitches so that a new pattern is created.
This habit began many years ago and was the impetus behind my big sampler (2.70 m X 1.70 m). I began this project in 1996 creating it pattern by pattern. In 1998, having embroidered nearly every day of the intervening years and when my fabric had no remaining space, I finished the sampler. 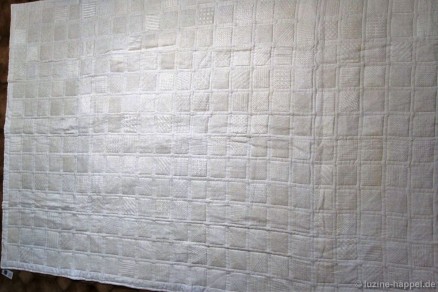 I embroidered only for my own pleasure; coming up with new patterns motivated and empowered me. 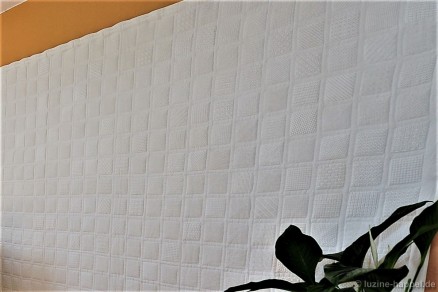 During this time I did not harbor any thought of publishing the patterns –this came later. At the time I had very little experience with computer text programs. And programs for editing images were absolutely foreign to me. I had to invest a huge amount of time and energy in learning these programs before tackling such a project and bringing it to fruition. 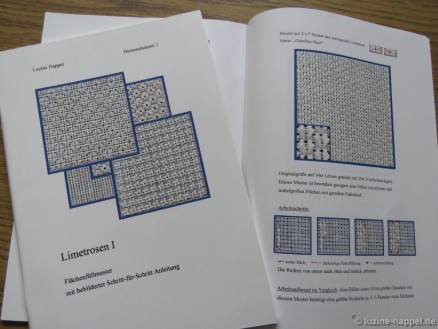 Then I had to organize my thoughts and determine how to best present all that I wanted share.
Because I got to know that many embroiderers were not fully able to transform graphics into steps of working, I mostly avoided writing schematic instructions. I realized that step-by-step pictures were needed. Unfortunately, I had not taken step pictures while stitching my sampler – all these had to be made now. When the end of the project was in sight, I found a printer with an acceptable price/quality ratio. And because I had decided to handle sales myself, I had to store at home lots of boxes of books. 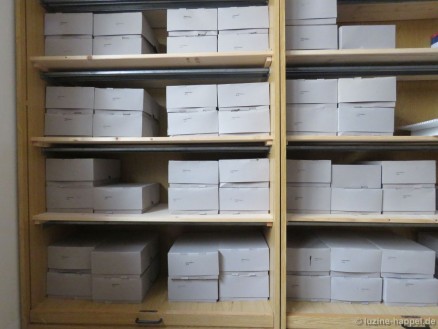 Since then more than eighteen years have passed. When, a couple months ago, the 1998 version of the book sold out, I thought to be content and not reprint. But requests and inquiries for a new edition induced me at last to tackle the project again – after all the patterns are beautiful and most are unique not to be found in other publications. 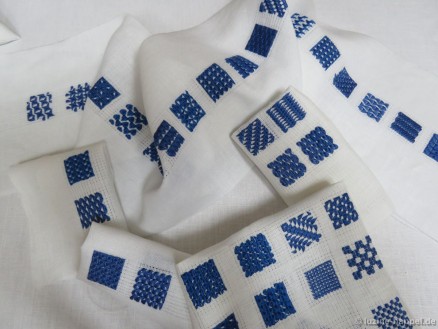 Working on this project again, I have come to realize that the first edition was not at all optimal. The stitches shown for illustrative purposes were too small. The patterns stitched with white threads were not always clearly recognizable. Also, the instructions were not always clear enough for the embroiderer to reproduce the pattern. 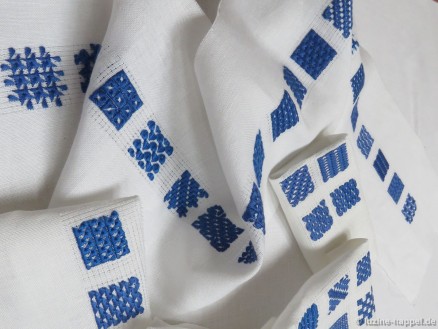 So I sat down and embroidered all steps for working again – this time with blue threads for better clarification. More than 2000 step pictures were taken! At all times I had to keep so much in mind:
After which stitch should I stop to take the next picture? Did the needle tip get cropped out of the photograph? 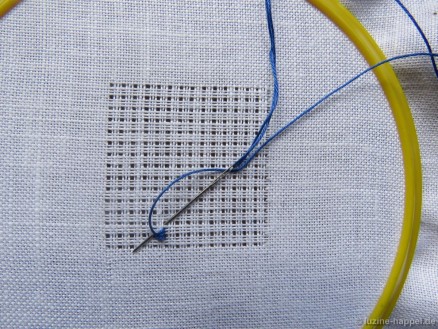 Is the background dark for a good contrast, or did the excess linen inadvertently fold behind the open grid? 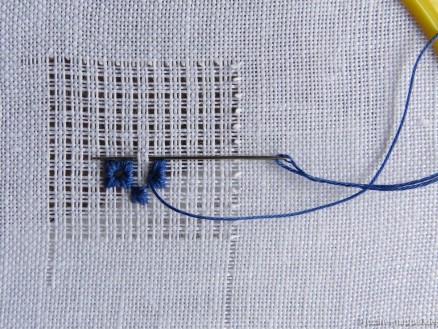 Is the camera held so that the cut-and-withdrawn-thread grid looks perfectly squared? Is there a dark cloud in the sky or is the sun shining too brightly at this moment? 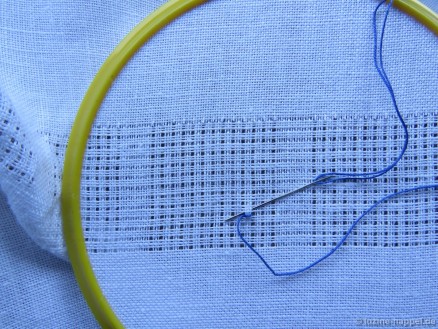 Although I always took the pictures during the daytime and used various image editing programs, I could not get all pictures absolutely uniform. Also I learned that although the edited images looked nice on my screen, they often looked different when they were printed. In the end 1032 pictures found a place in my new book.

When the pictures had to be combined with the text, I stopped short of resigning. Why did the pictures not hold the place I gave them? Why did the line distance change automatically? Why was there all at once a typeface I had not chosen? And then my PC crashed, because the document with so many pictures got too big for the random access memory. And, and, and . . . 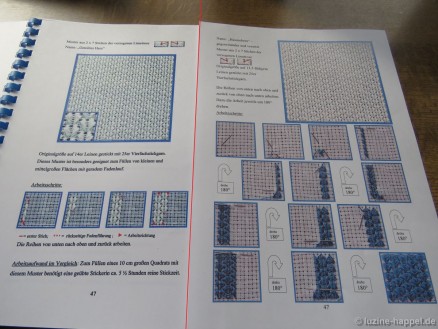 Pattern pages in comparison – left: page of the first edition, right: of the new edition

But it is not my nature to give up so quickly. If I accept a challenge, by all means I try to rise to it. So, with frustration reduced by many walks in the fresh air, I went on! After many months and countless hours of hard work, the new edition is finished.
The layout has been changed. Useless text was deleted to make room for many step pictures. The text that was kept was deemed the most necessary.
The introduction has been improved: substantially enhanced with more comprehensive text and all explanations illustrated with pictures. 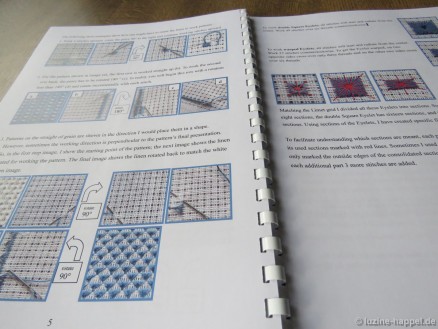 In addition, two overviews were placed at the front of the publication: large thumbnails of the reduced white embroidered patterns, 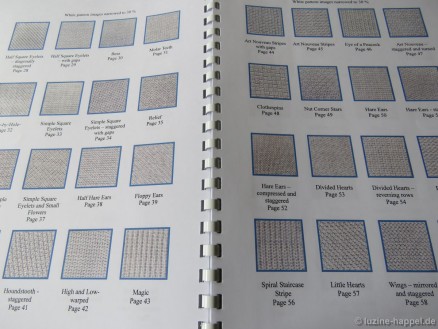 and large thumbnails of the blue embroidered examples (most in their original size). These overviews are very valuable because these patterns are not only well suited to whitework or Schwalm whitework but also to other embroidery techniques requiring white or coloured threads to attractively fill shapes. 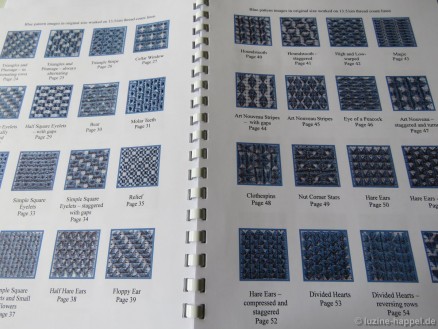 In addition, there is an overview of the specific pattern sections used throughout the book. The referenced samples are enlarged and in blue. This overview helps in understanding how the individual names came about, but it might also motivate the readers to create their own patterns using the individual sections.

Many embroiderers have asked for an English edition of this book. I am now happy to announce that Limetrosen I – a book filled with unique filling patterns based on the Square Eyelet, an abundance of images, and illustrated instructions is now available. 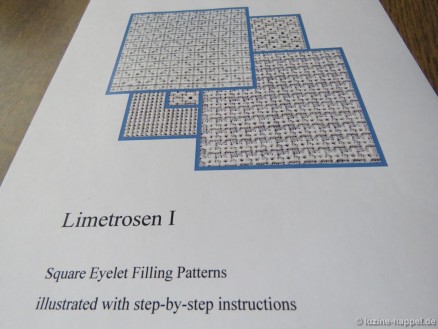