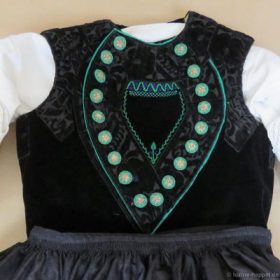 The Schwalm women´s festive costume waistcoat – also, because of its many buttons (Knöpfe), called “Knöppding” or “Kneppding” (thing to button up) – was worn over the bodice. 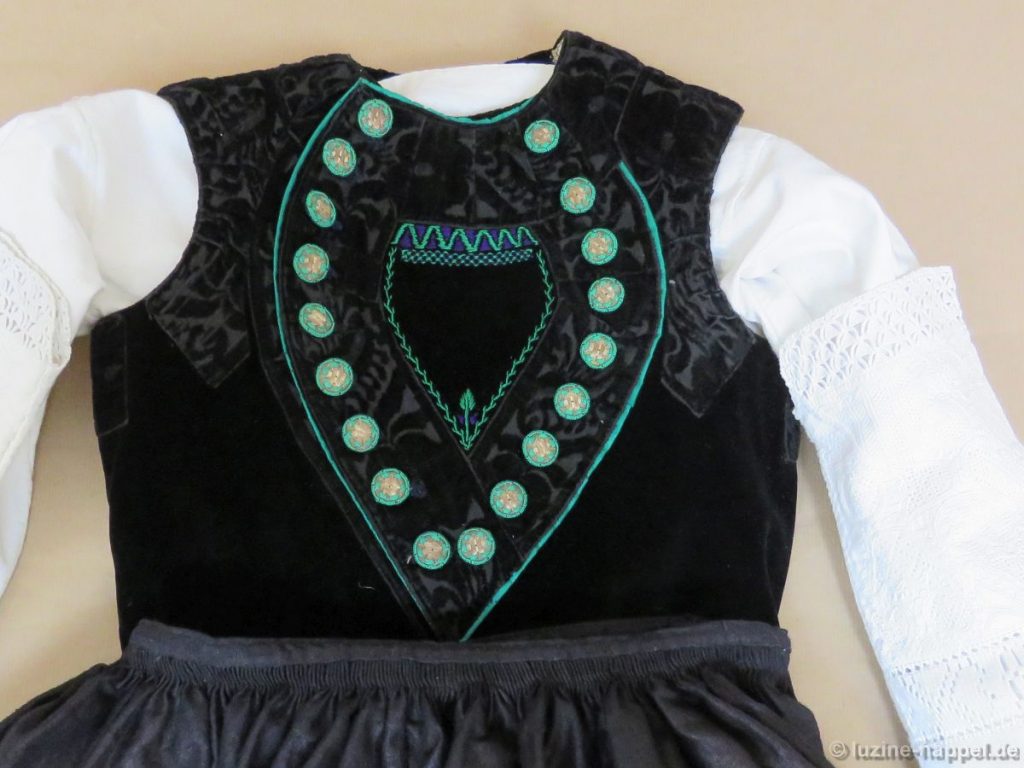 The back of the waistcoat was unadorned. 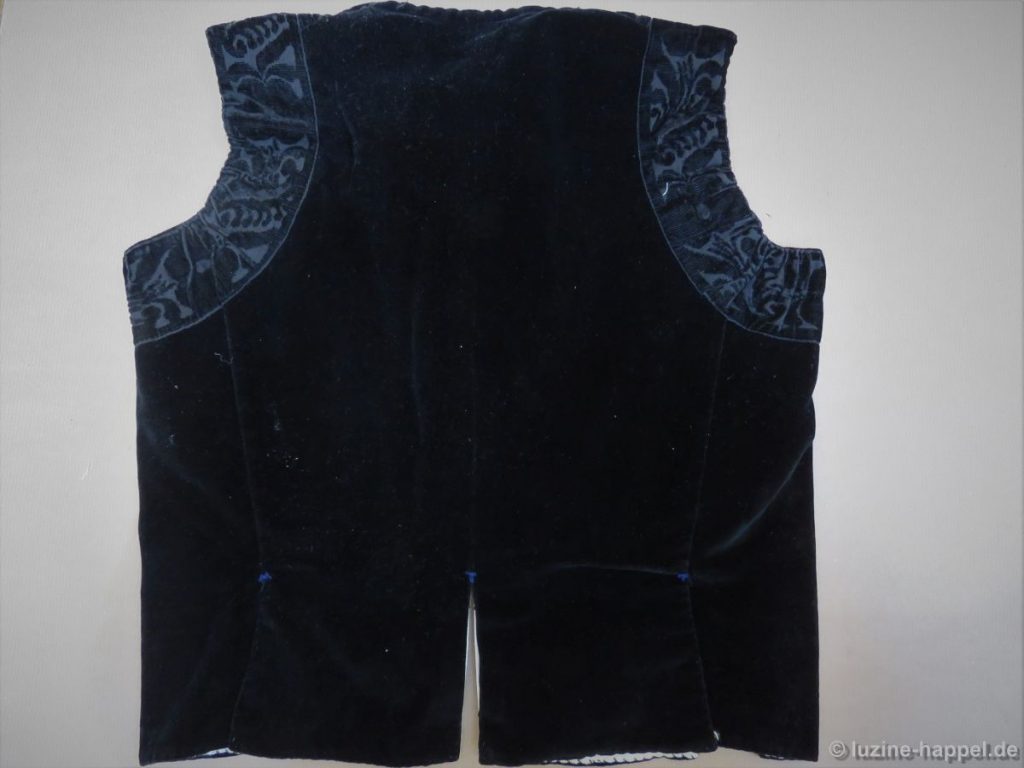 The waistcoat was usually made of black velvet, but black woolen cloth was also used. The lining was made from fine white linen.
From the collarbone to the waist, the waistcoat was close fitting. 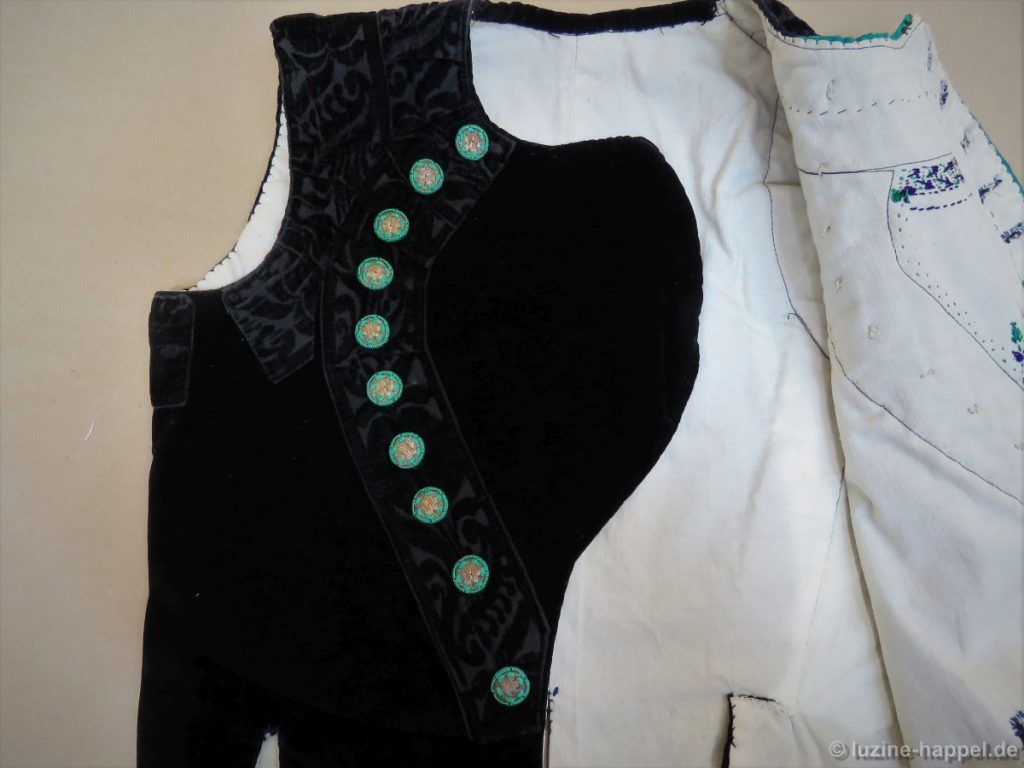 From the hem to the waist, some cuts were made. The sections below the waist were worn under the skirts. The cuts enable the waistcoat to lie over the bolster of the harness. 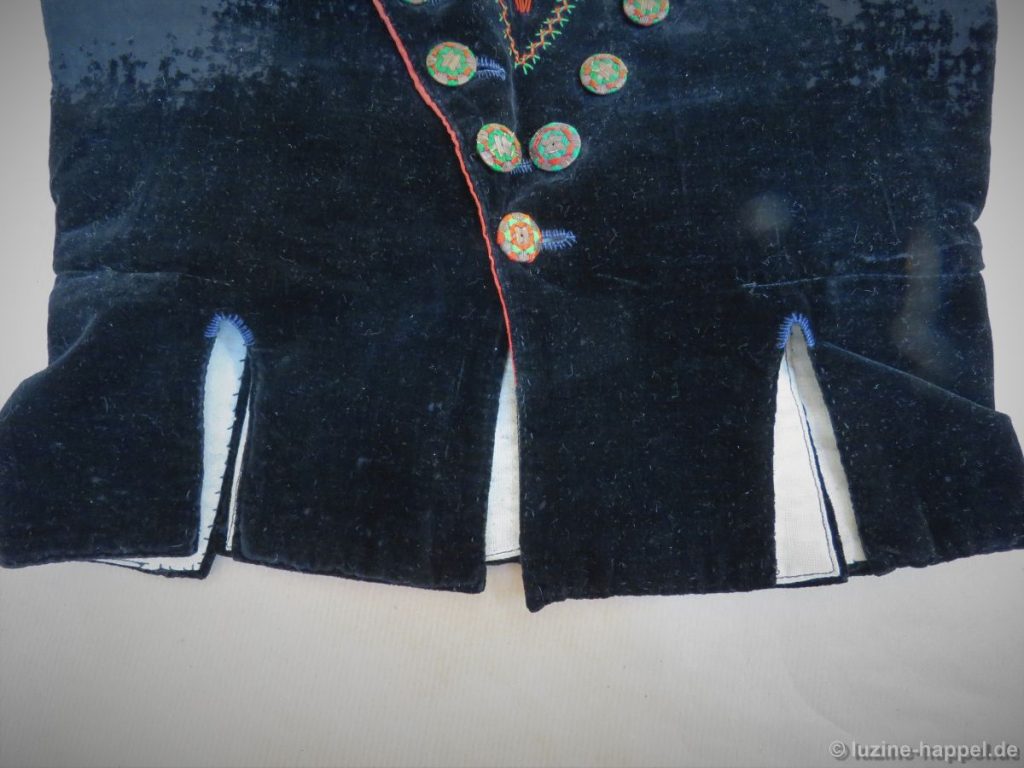 Some waistcoats had bags attached to the sections below the waist. These bags could be filled to simulate a bolster and thus eliminate the need to wear a harness. 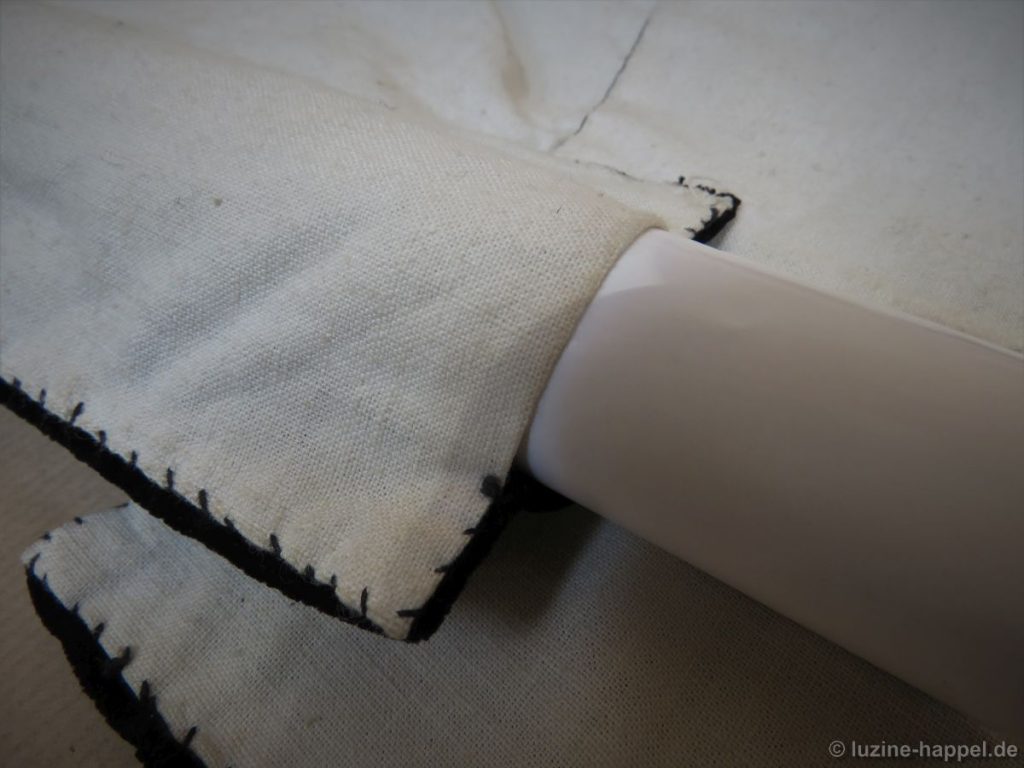 The upper sections of both front pieces were cut with large curves. One was worn on top of the other. 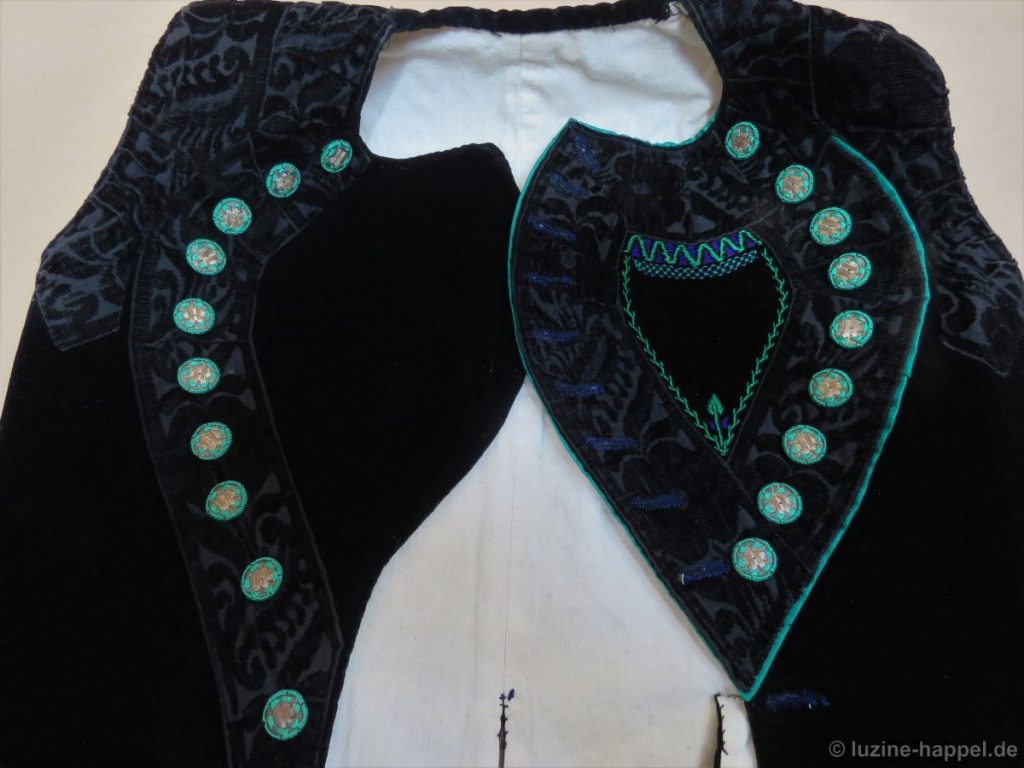 The armscyes and the front necklines were edged with black patterned velvet bands about 5.5 cm wide. The bands needed to be eased (with tiny pleats) around the curves. 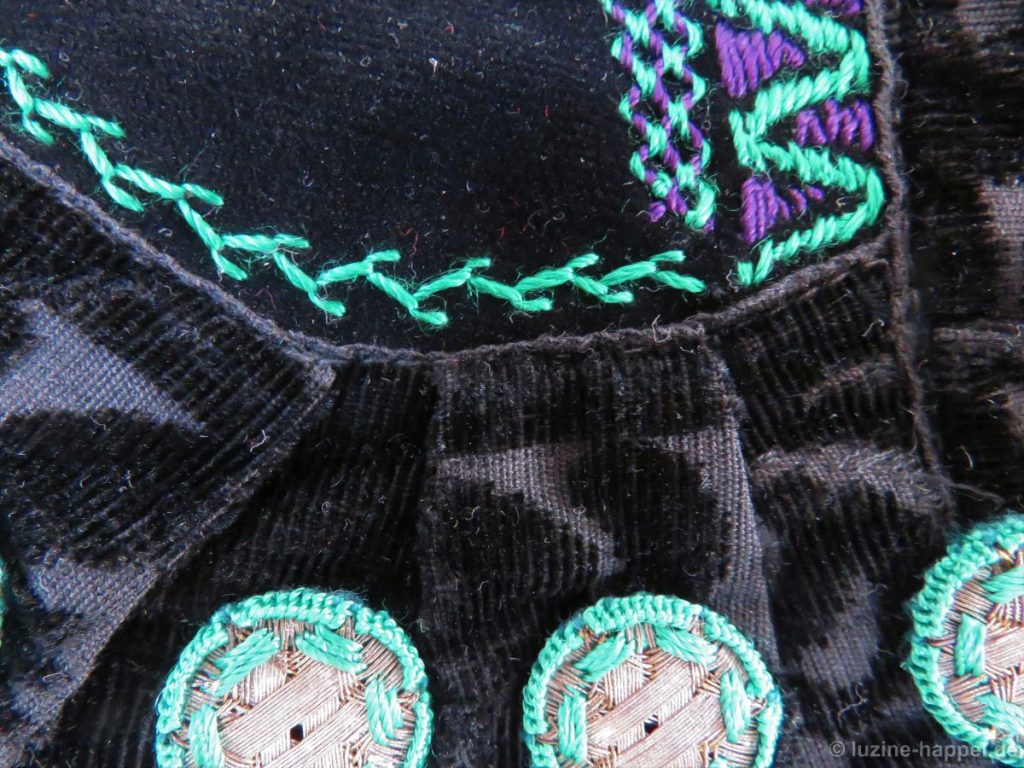 The same velvet edging is found on both front pieces of the waistcoat. However, on the left side the edging was also applied at the neckline and the front edge. 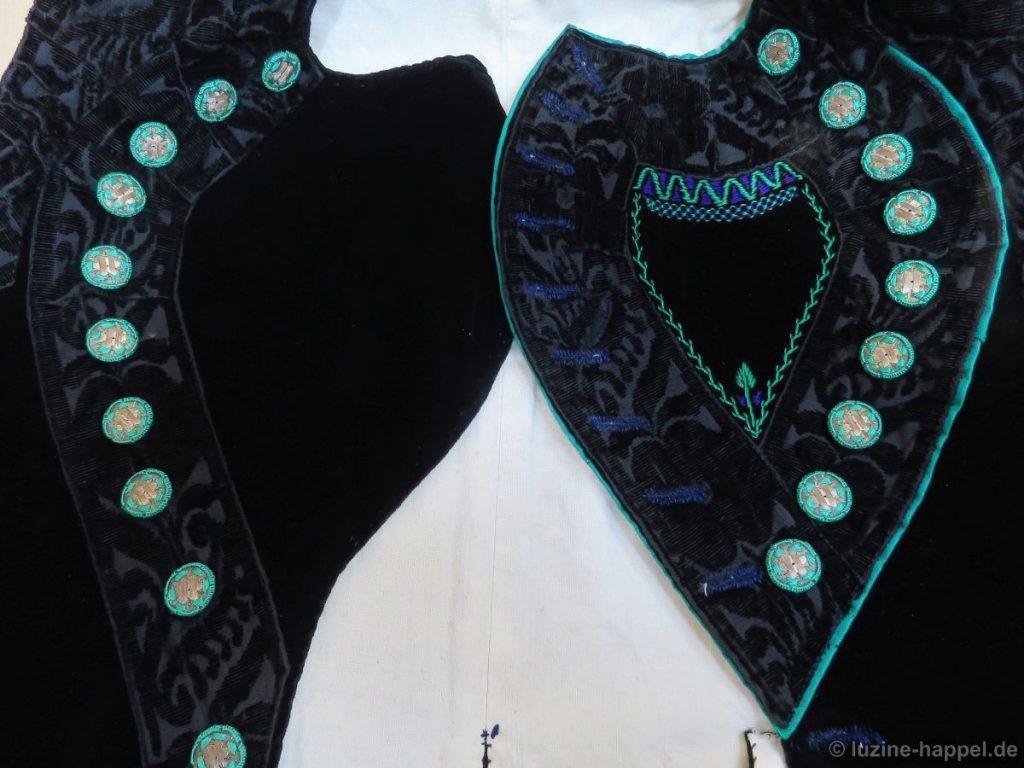 In this way a heart was formed. This heart has at the outside edges a piping in the colour of the costume – red, green, blue or black. 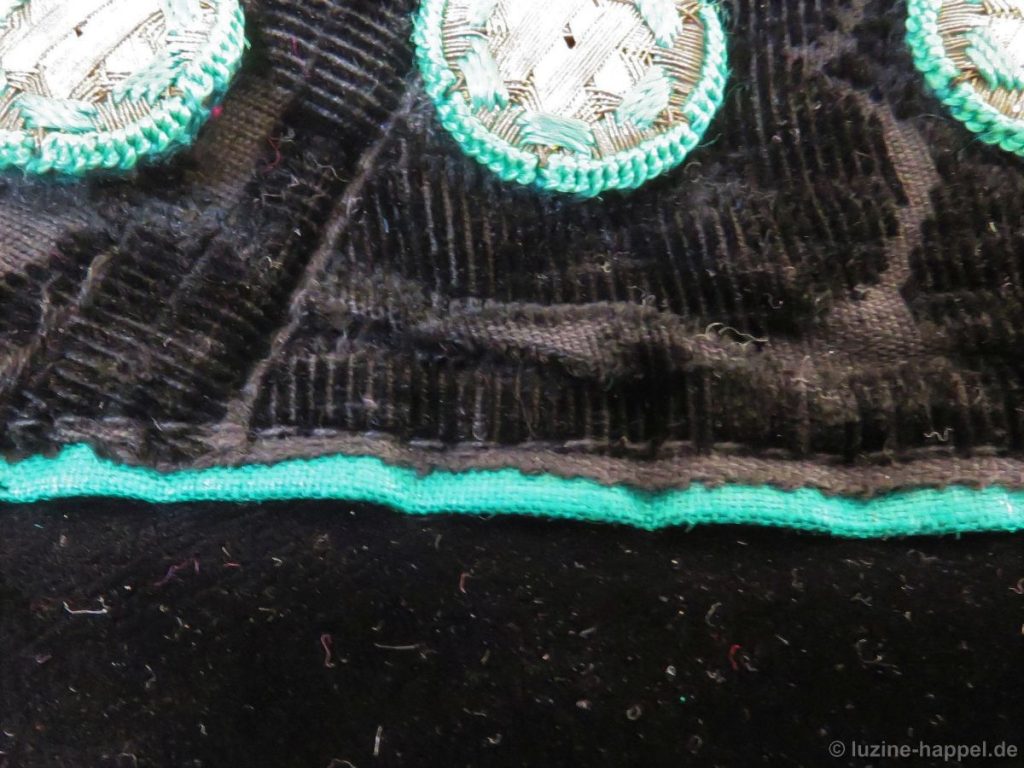 Often the inside edges of the heart were embroidered using silk threads in the colours of the costume. So the significance of the heart form is further established. 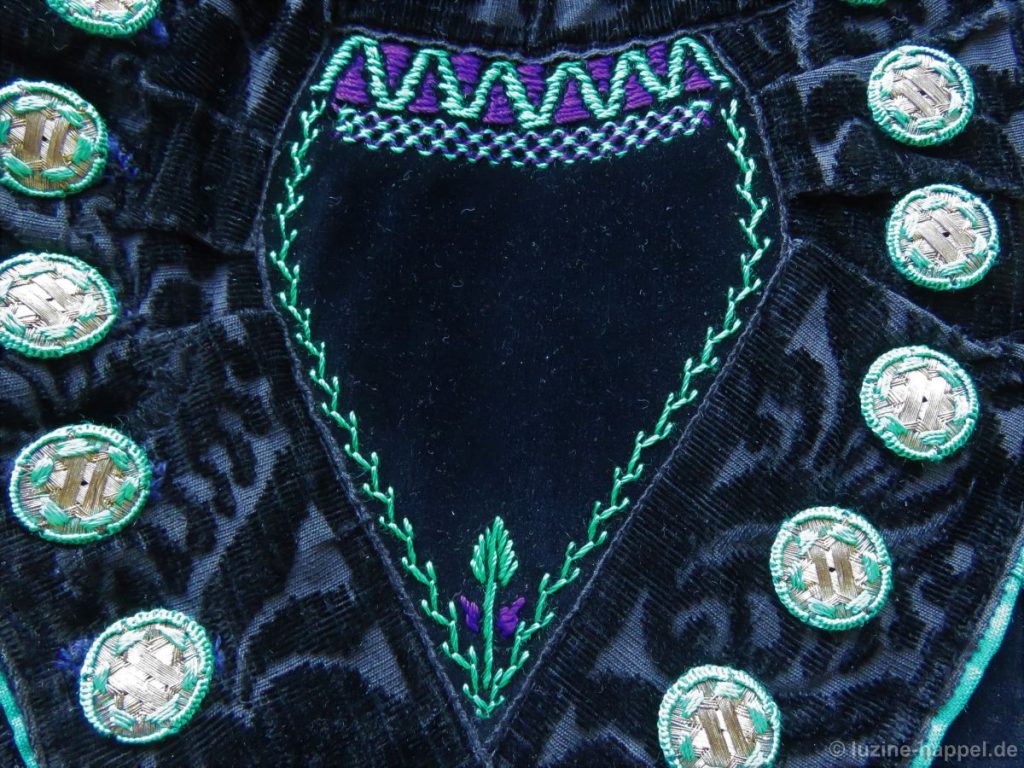 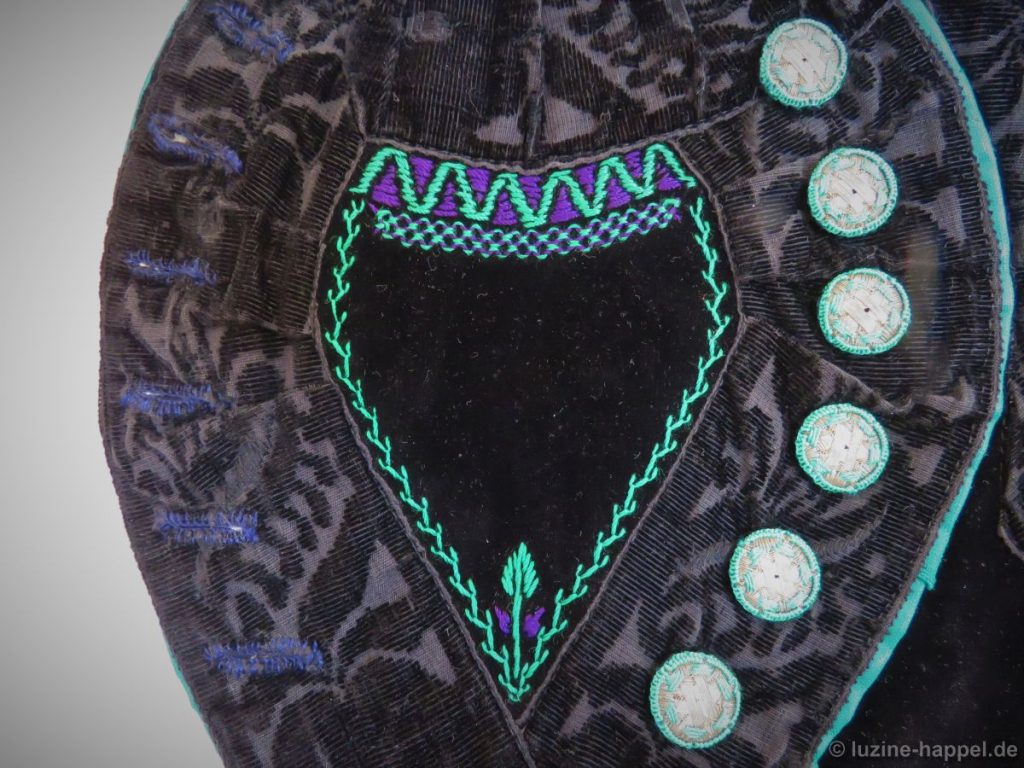 When the waistcoat was buttoned, the arrangement of the buttons formed another heart.

A woman’s waistcoat usually had nineteen buttons. Not all buttons were usually buttoned up; often three or four buttons remained unbuttoned. 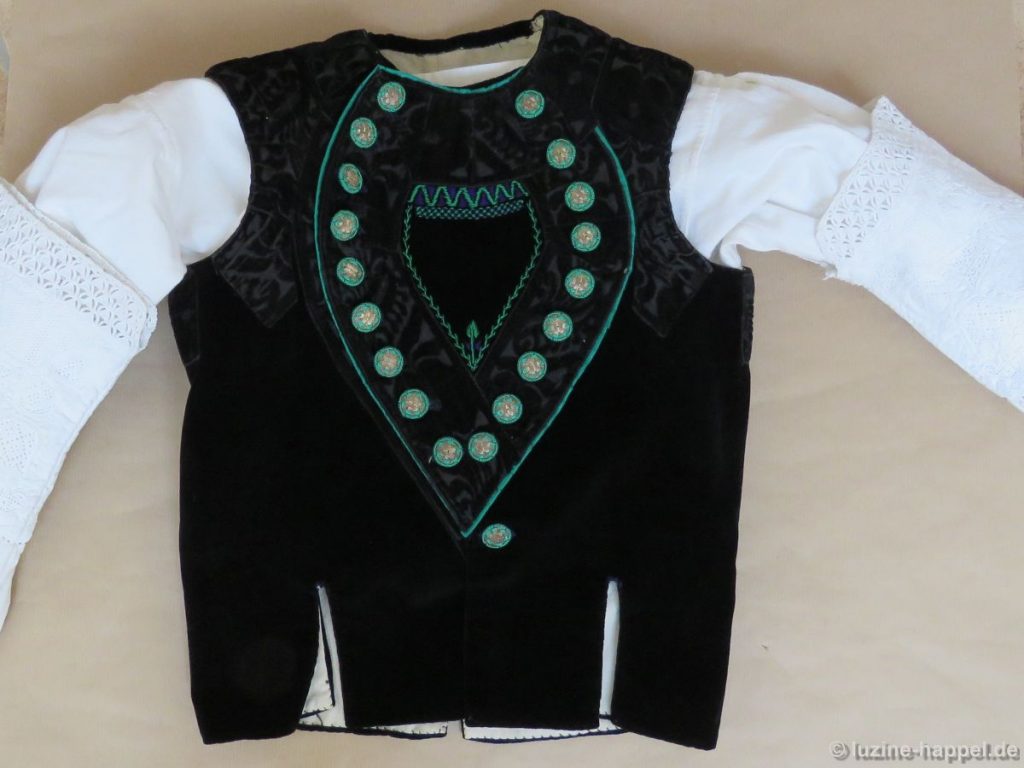 Waistcoats in the other colours also looked precious. The waistcoat below was part of a girl’s red costume. Unfortunately, this waistcoat is missing some buttons. 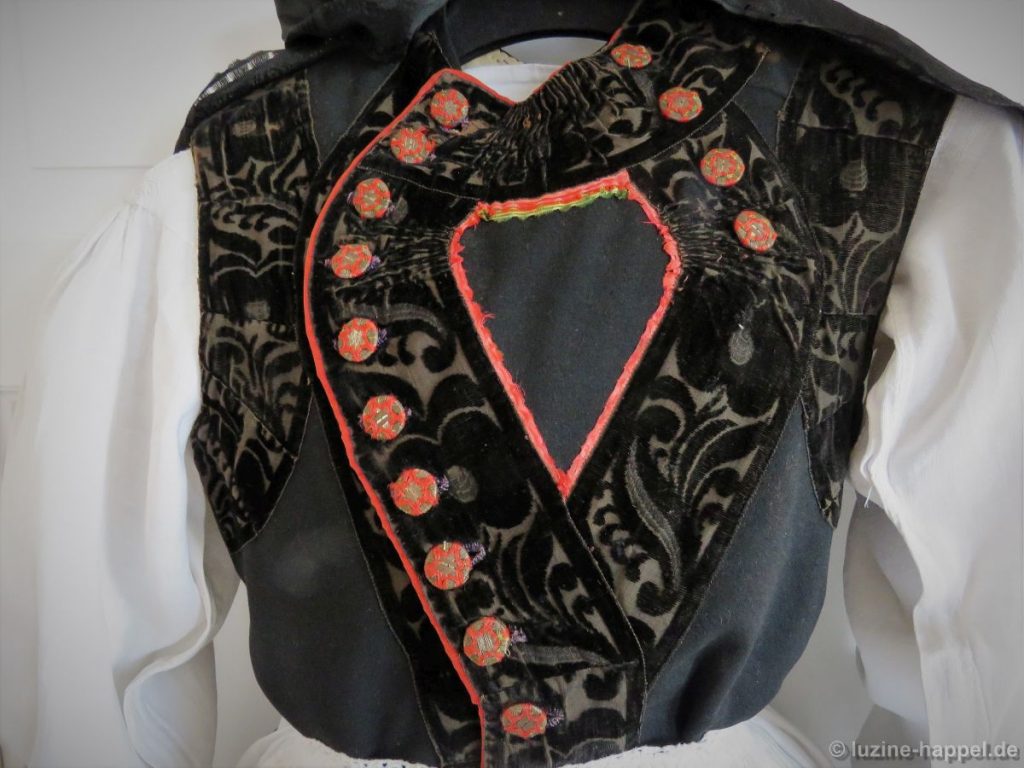 The fancy handmade buttons in the special arrangement gave the waistcoat the splendor, 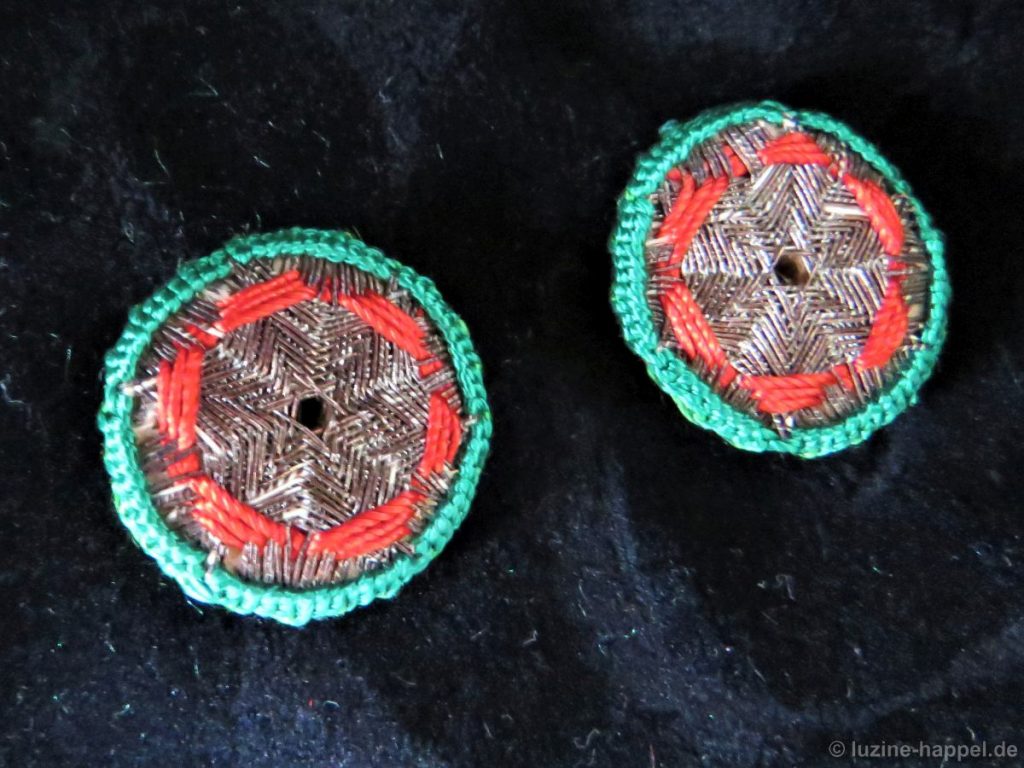 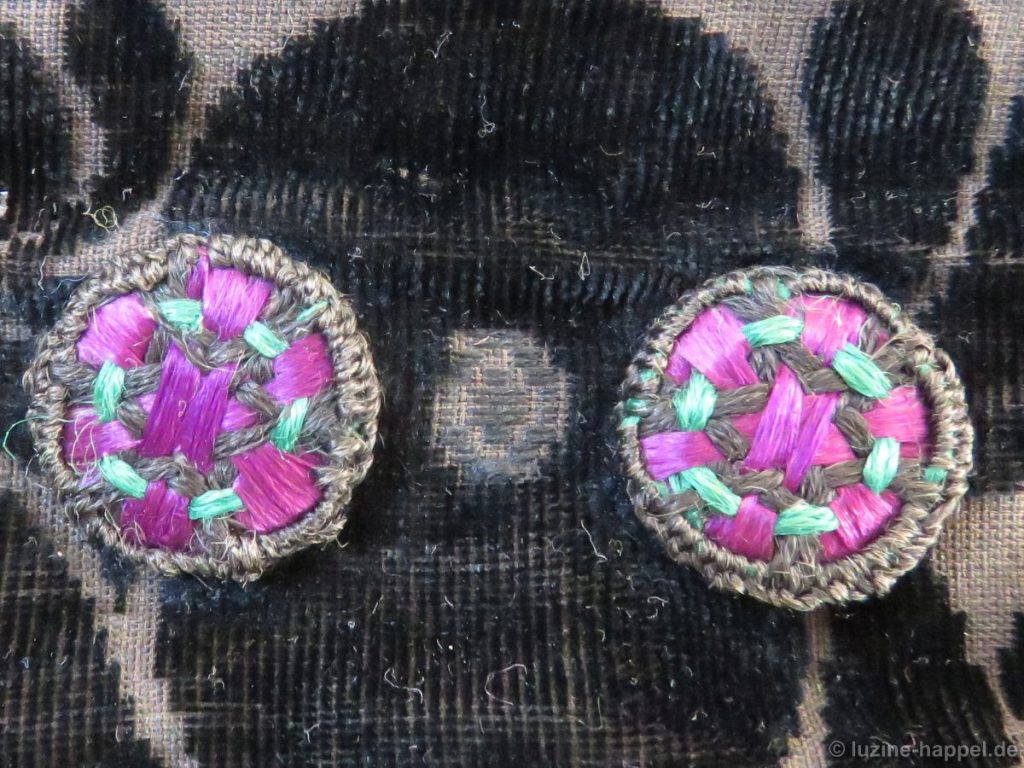 and the number of buttons gave the waistcoat its name – Knöppding. 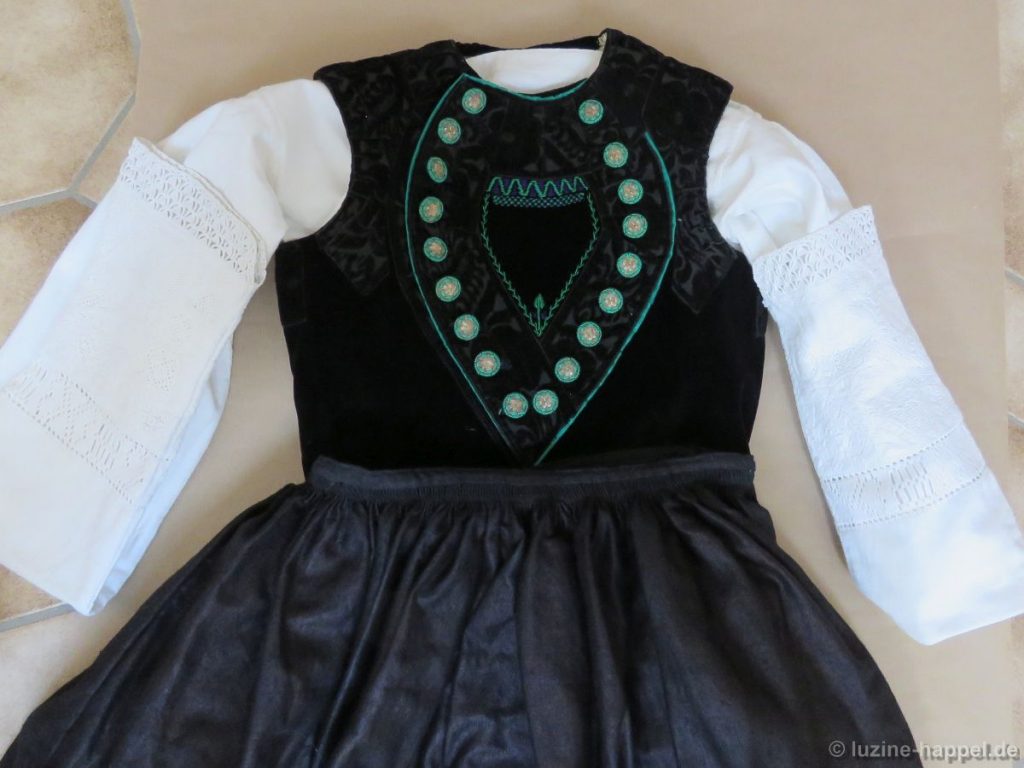