Today I present something very special: the border of a parade cushion from 1826! Unfortunately, the cushion is no longer intact, but the embroidered border – the most important part, at least for people interested in such things – is still in good condition.

The linen has a 21/cm thread count – thus it is relatively fine. The border in all has a height of 21 cm, the embroidery only has a height of only 15 cm. The embroidery is bordered by a six-unit divided needle-weaving hem which is itself bordered with Peahole hems on both sides. The needleweaving pattern is rare. 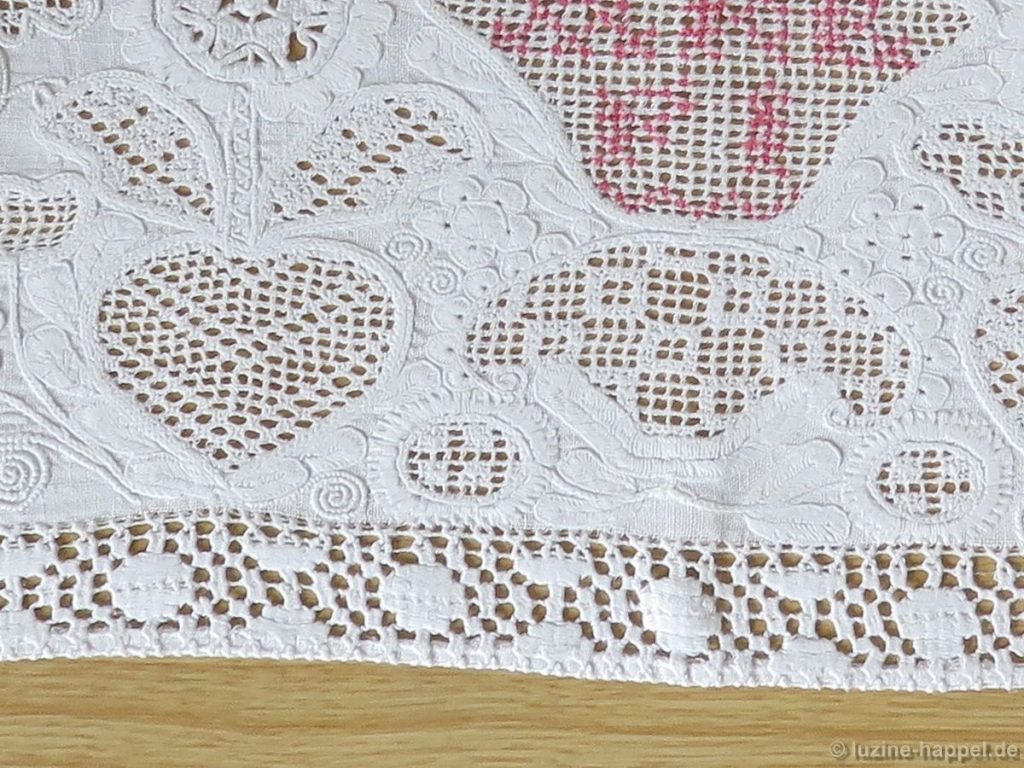 I have two of these borders. They are identical except for the big tulip in the top center. One tulip is decorated with a white Rose stitch pattern and displays the initials AKR and probably F and the year 1826. 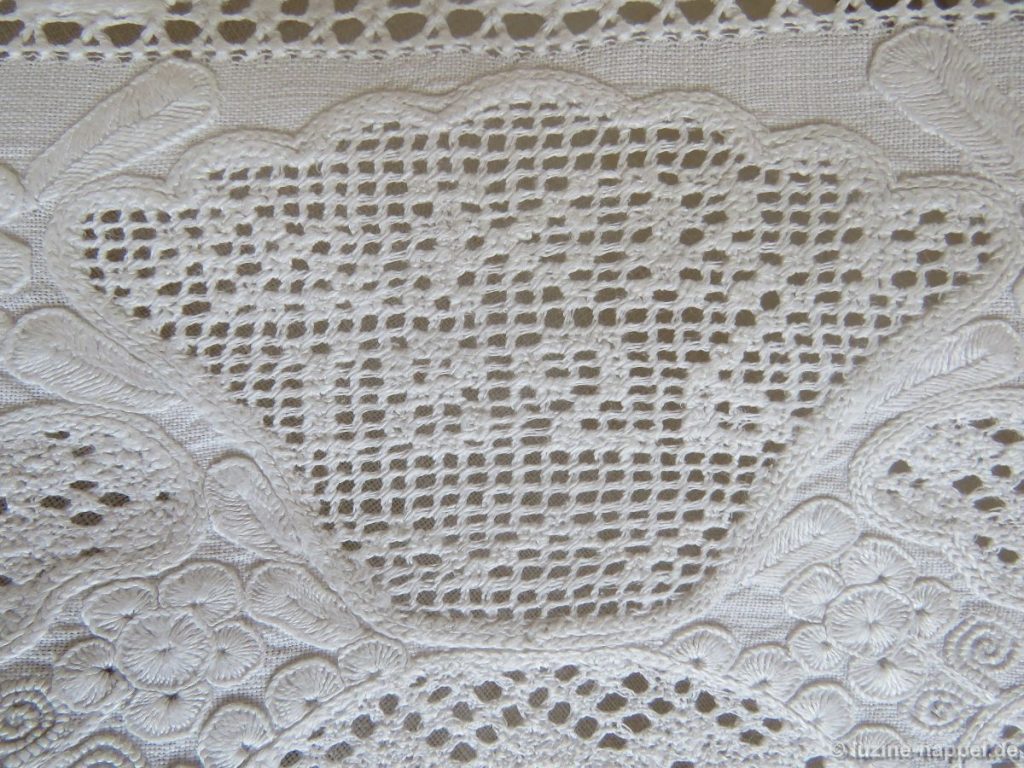 The other has a red Rose stitch pattern. Red is sometimes, but rarely, incorporated into whitework borders. In this tulip, the initials AKRFI are visible. 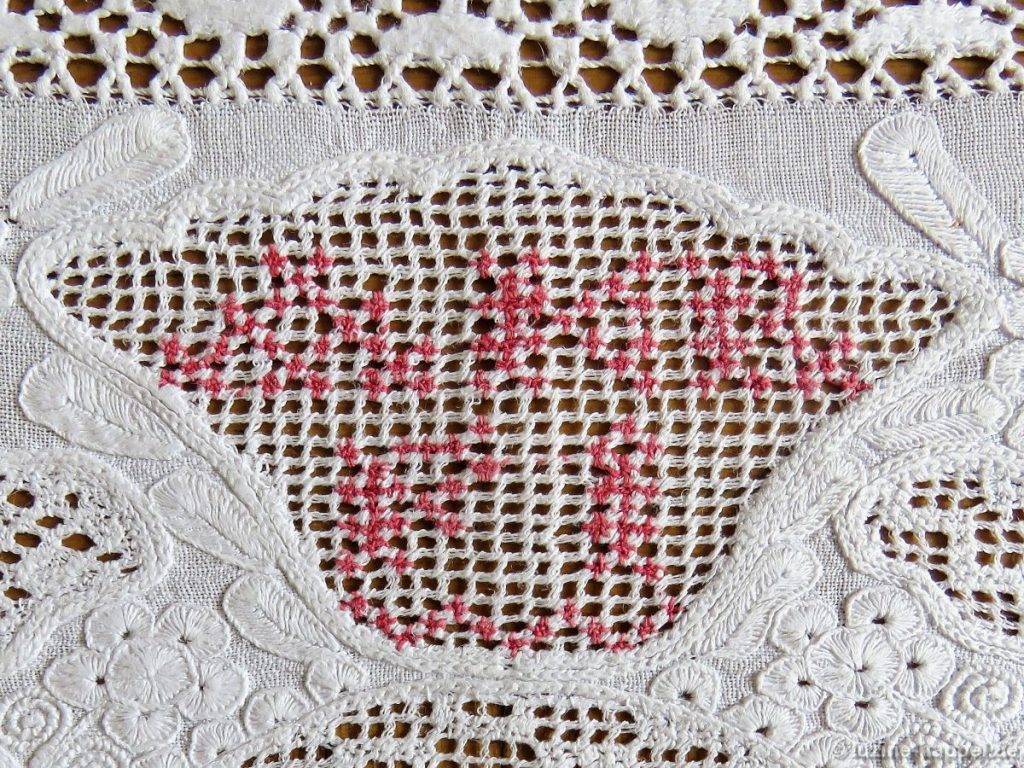 The design is created mirrored at the longitudinal axis. But the filling patterns were not worked symmetrically. In some instances, they differ very much, as the image on top of this article shows clearly. 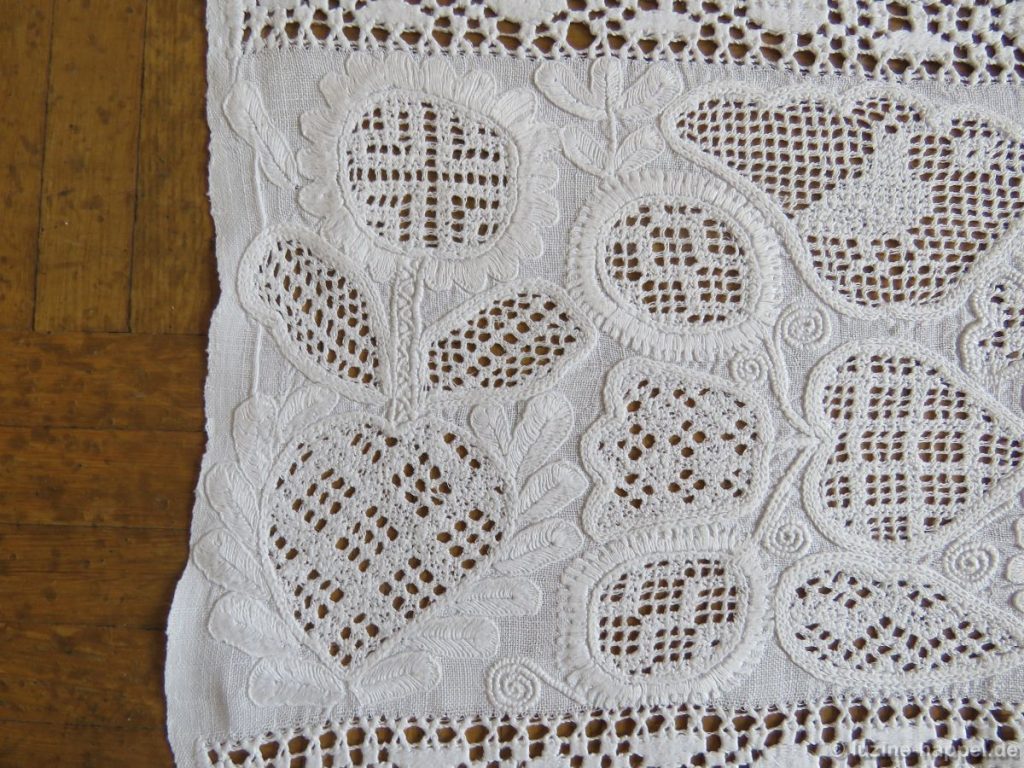 One distinct feature is the bird pattern that was embroidered using Rose stitches into a tulip shape next to a bird shape.

Both birds hold something in their beaks. 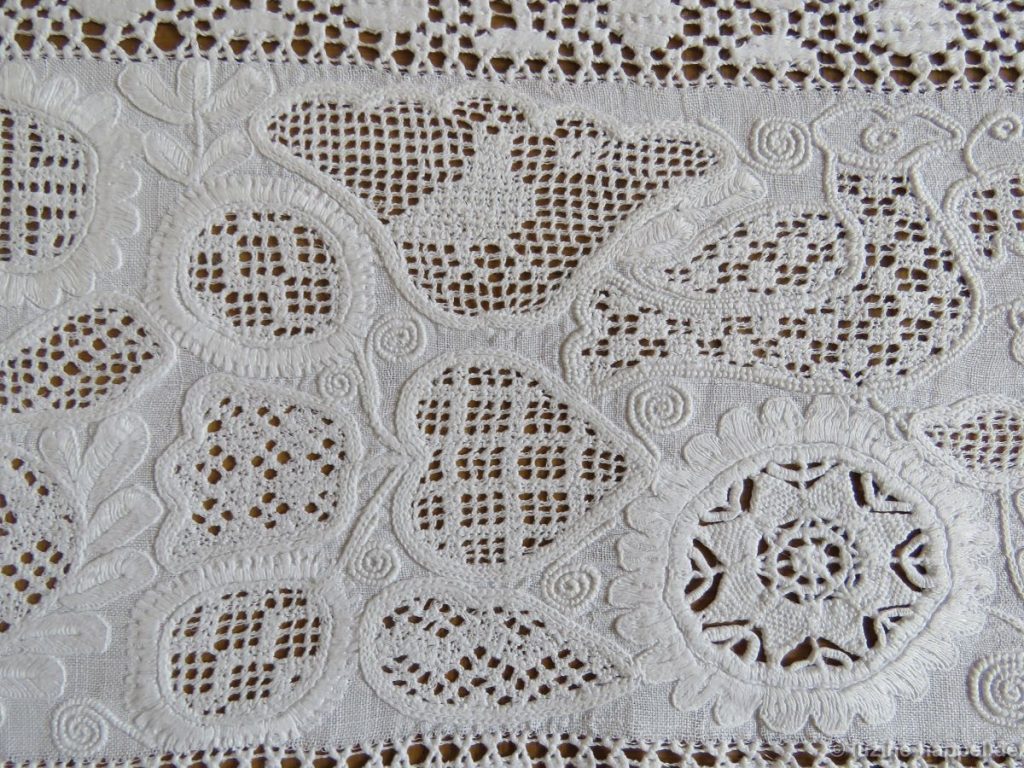 Some circles are filled with needlelace; six-pointed and eight-pointed stars are visible. 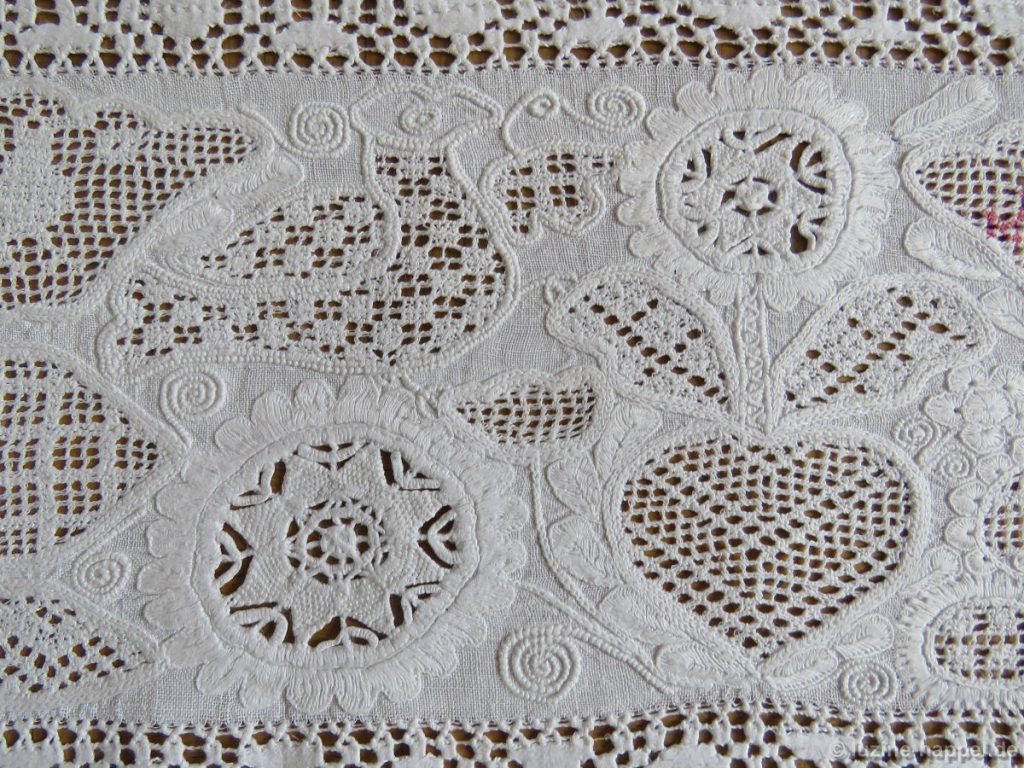 Also worth mentioning is the arrangement of the stems between the heart and the star circle. Worth viewing is the special treatment of the edges of the shape below the center tulip: Big leaves in the form of a bowl at the bottom, tendrils ending in Chain stitches, and a several half eyelet scallops on both sides make this shape eminently interesting. 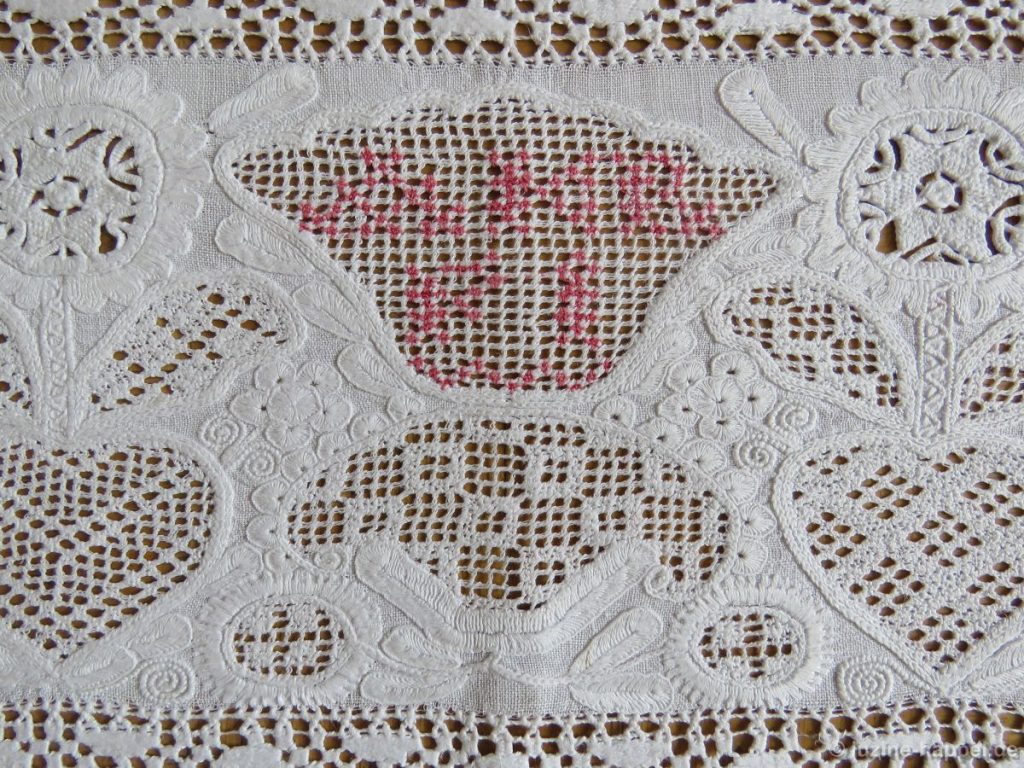 The placement of the bird´s legs is also interesting. 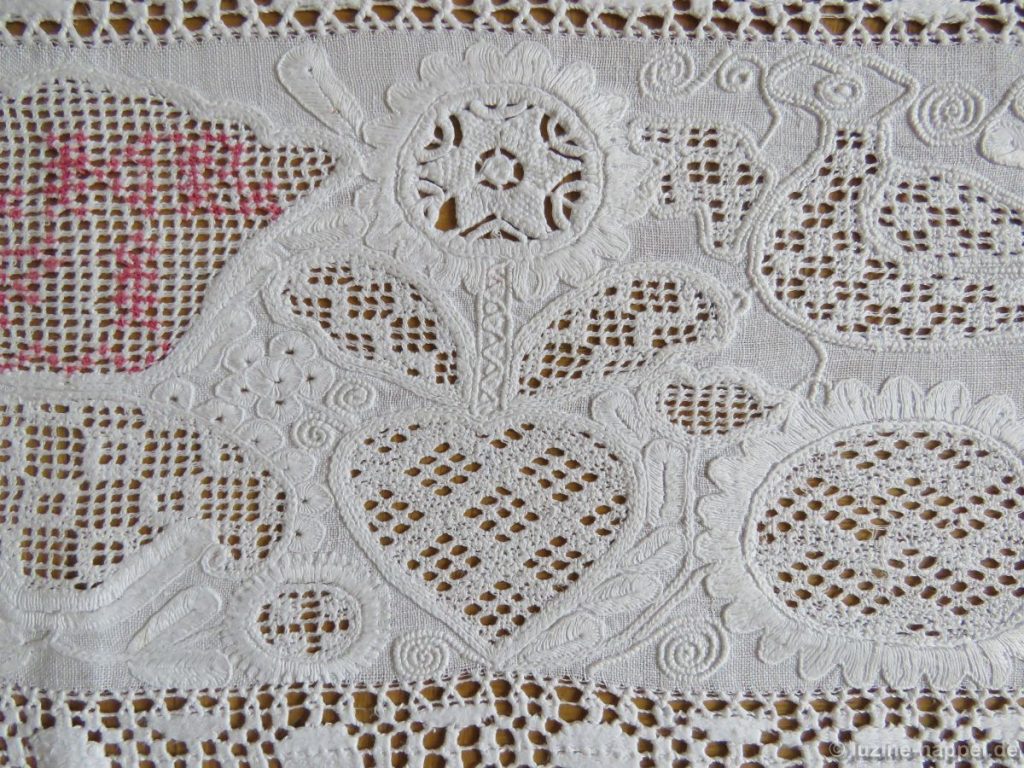 It is apparent that Coral Knot stitches as outlines were worked rarely on this piece. Coral knots can be seen on the bird motif as an outline and as the stem in the bird’s beak. They can also be seen in the tightly curled tendrils. 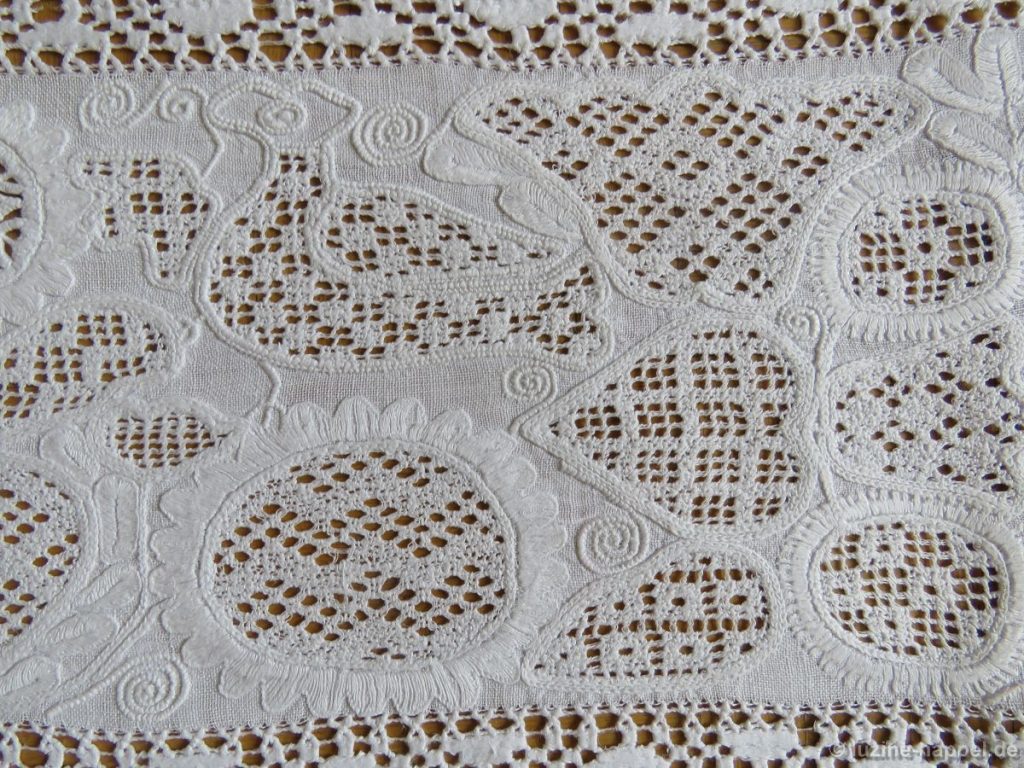 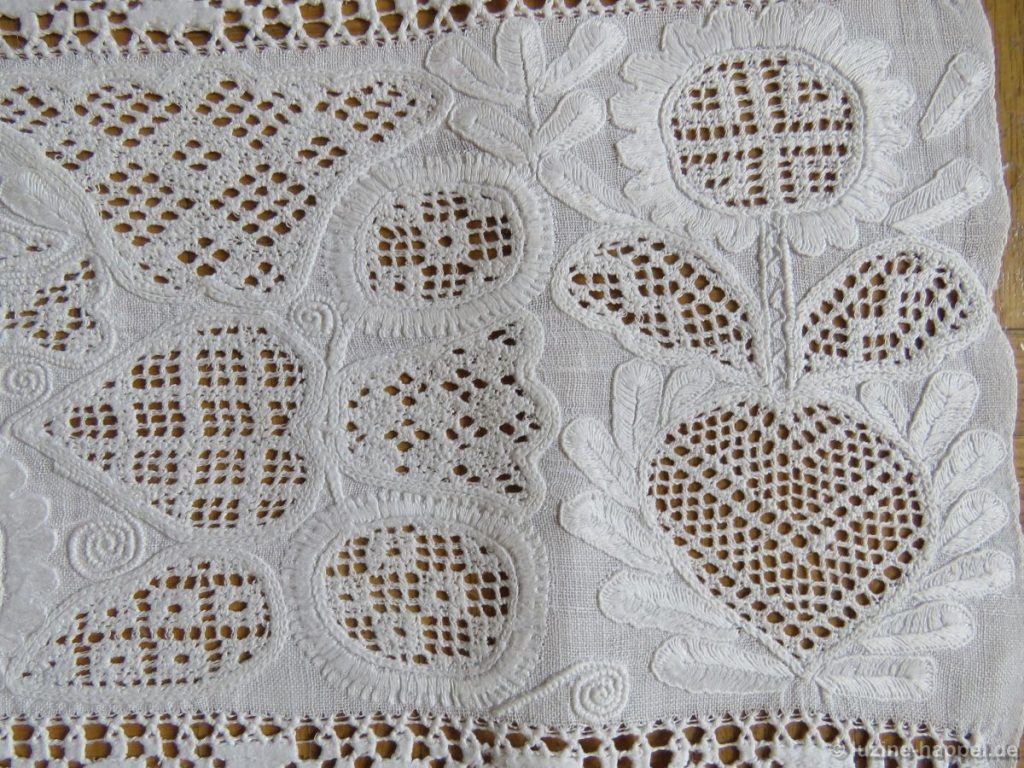