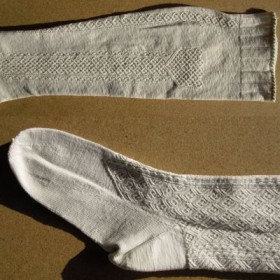 The Schwalm people wore hand-knit stockings that reached well past the knees. The stockings were held up with garters bound around the legs.

In the year 1930, a poor bride would possess six to eight pairs of stockings, while the rich bride would have 40 pairs in her trousseau.

Specifically patterned stockings were worn on different occasions. The “Linkten” – stockings with patterns made with purl stitches – were worn during mourning and by old wives. The “Zwickelstrümpfe” (Zwickel = gusset, crotch) with small pattern-stripes were worn during everyday life. They were usually made from thicker yarn. On Sunday, “Zwickelstrümpfe” with wide pattern-stripes were worn; these were made from fine yarn. For special festive days and holidays, “stolze Zwickelstrümpfe” (stolz = proud) were worn. (In the Schwalm, the label “stolz” was given to all things especially gorgeous and elaborately decorated.) The “stolzen Zwickelstrümpfe” were knitted with very fine yarn and had especially beautiful and elaborate patterns with extra wide pattern-stripes. The “eingelegten” (= inlaid) stockings were a specialty. These “Zwickelstrümpfe” had elaborate knitting patterns in which an additional thread was carried and, depending on the pattern, alternately laid before or behind the stitches. (One could get the impression that those stockings were embroidered after knitting. That is not the case – it is a pure knitting pattern.)
Because the techniques involved were extremely difficult, only the most talented knitter or the richest women could afford this impressive kind of “Zwickelstrümpfe”. Of especial worth are stockings in which the initials or the year were knitted: here, “AKE” for Anna Katharina Ermel.

The stockings were knit in rounds, from cuff to toe, employing five fine knitting needles. They were composed of different sections. The cuff was a 5-10 cm high stripe or band. The “Börtchen” ( = small border) was knit according to the occasion for which it was meant to be worn. The “Börtchen” pattern might be a simple knit 2, purl 2 rib, a peekaboo or pigtail design. 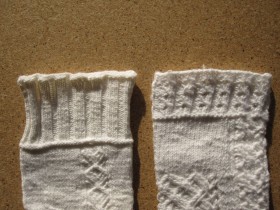 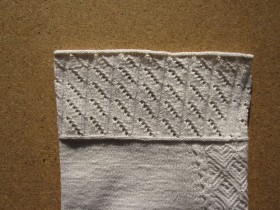 At the back of the stocking, from bottom of the “Börtchen” and down to the heel, runs a small straight pattern-stripe called “Nähtche” (= small seam). The remainder of the area under the “Börtchen” and past the knee, plain stockinette stitch is worked for a some centimeters.

Now, along both sides of the calf runs a pattern-stripe, beginning with the “Platte” ( = plate). 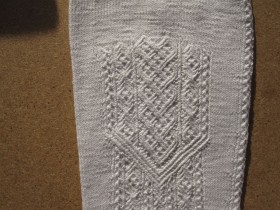 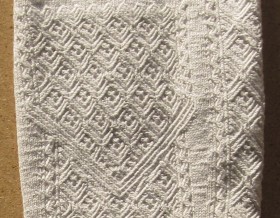 On women´s stockings, the pattern continued onto the top of the foot to the toes. This is because women wore not only the buckle shoes, but also the low-cut “Kommod” (= commodious) shoes. On the men´s stockings, the pattern ended at the top of the heels. This is because men only wore the high-necked buckle or lace-up (for everyday life) shoes or boots.
On many women’s stockings a very narrow, straight pattern band with a curved pattern, called “Schlängchen” (= small snake), ran on both sides of the “Zwickel”. 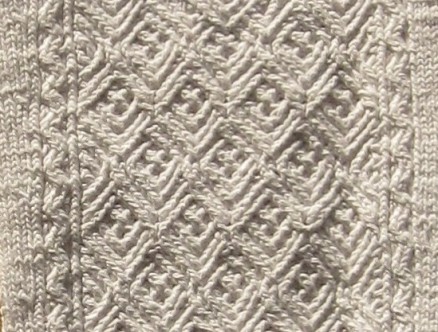 Heels, soles of the foot and toes were worked in stockinette stitch. Casting off the tip was mostly made in a star form. 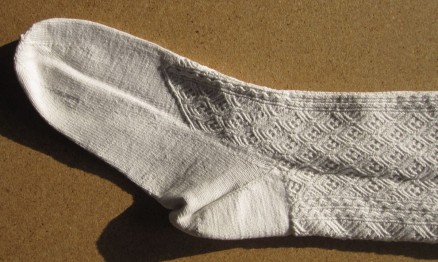 There are many different knitting patterns playing a role in Schwalm knitting. I will show some of them in future posts.