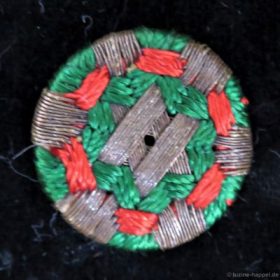 The buttons for the Schwalm women’s waistcoats and other items of dress were passementerie buttons. The Huguenots brought this button-making technique to the Schwalm from France at the beginning of the 18th century. Materials used were gold and silver wires and silk threads in red, green, lilac, and black (matching the festive costume ); white and yellow silk threads were also used, but only rarely. Sometimes only metallic threads were used, and sometimes only silk threads. One will see silk-only buttons mostly in the black buttons on mourning garments and in children’s buttons. Most common, however, was a combination of both materials. 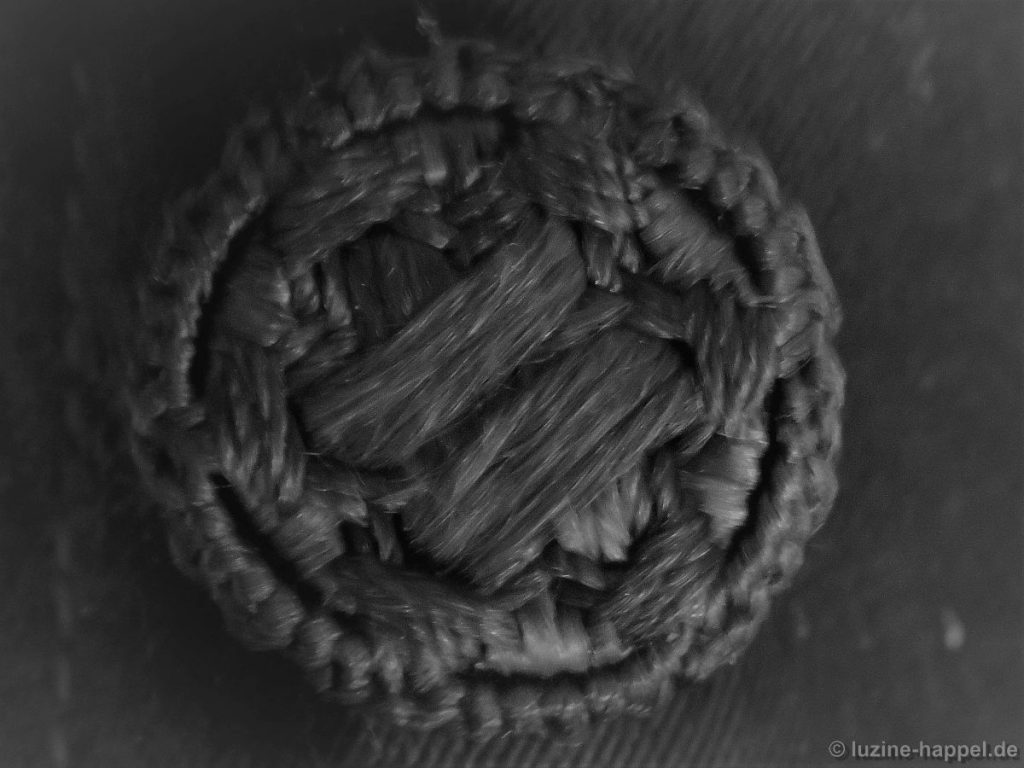 Threads were wrapped radially around a wooden disc that had a hole in the center. They were held in place with weaving and Running stitches. 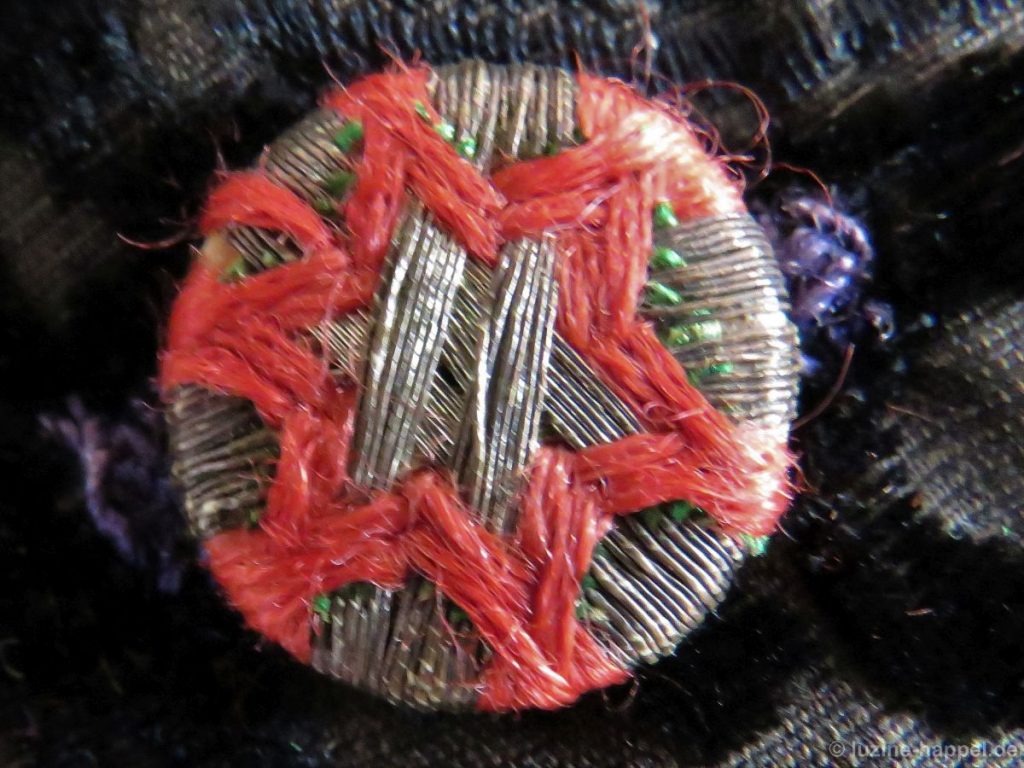 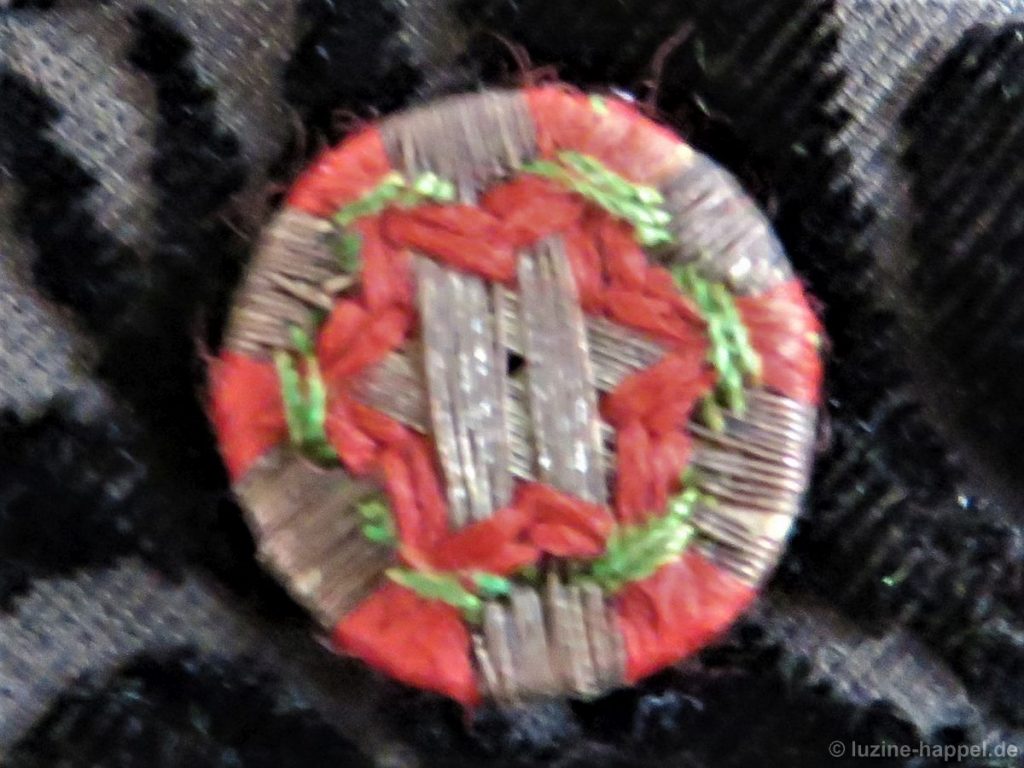 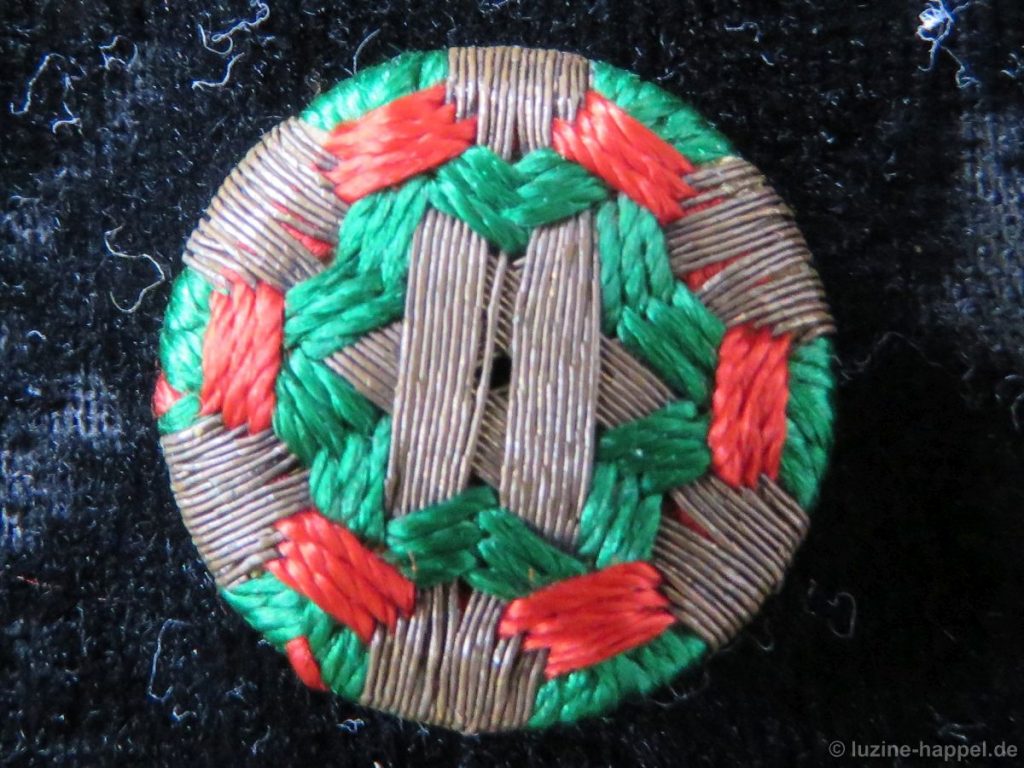 Usually the buttons got a needlelace edging, serving as both an additional decoration and to protect the edges. 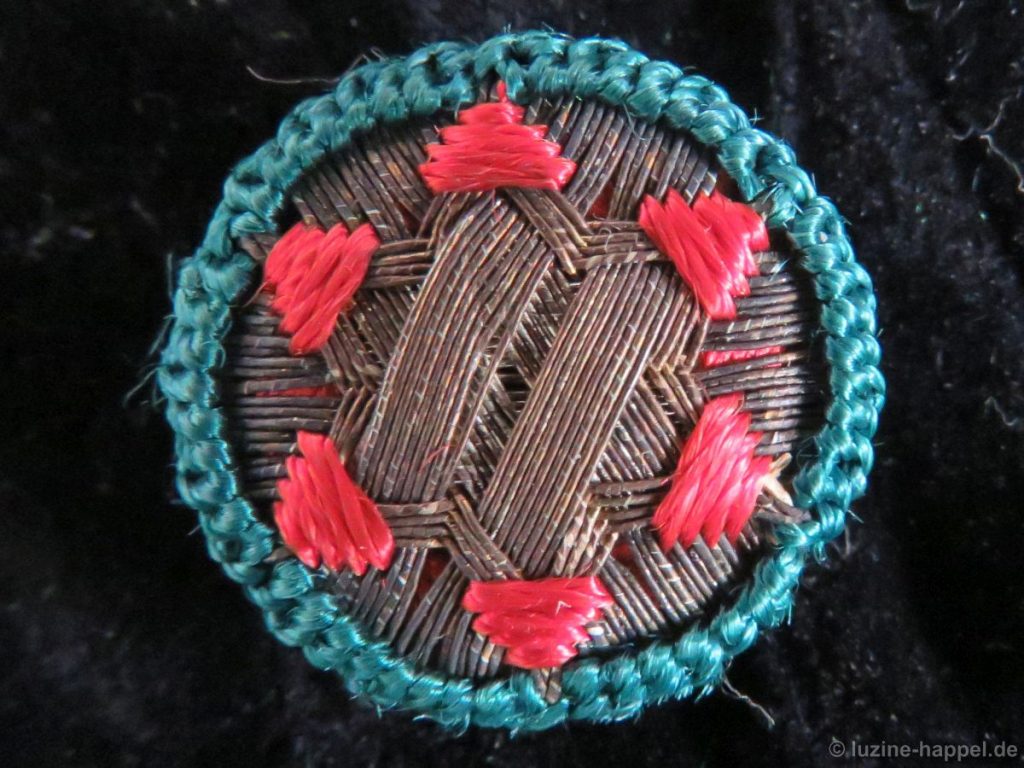 I found two different ways of wrapping the threads. All wrappings create a six-pointed star pattern on top of the button.

The most common method for establishing a star was to lay threads in two wide parallel stripes left and right of the center and to continue laying similar stripes two more times by rotating the piece 60° and 120°. 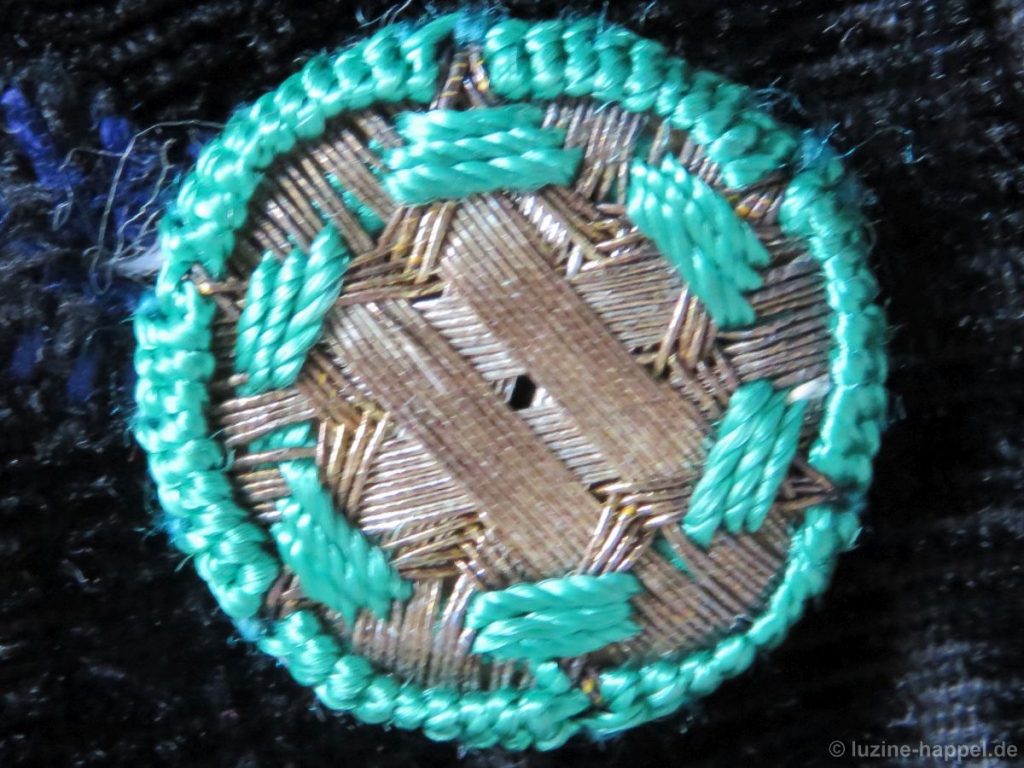 The stripes were held in place with weaving and Running stitches of different lengths. 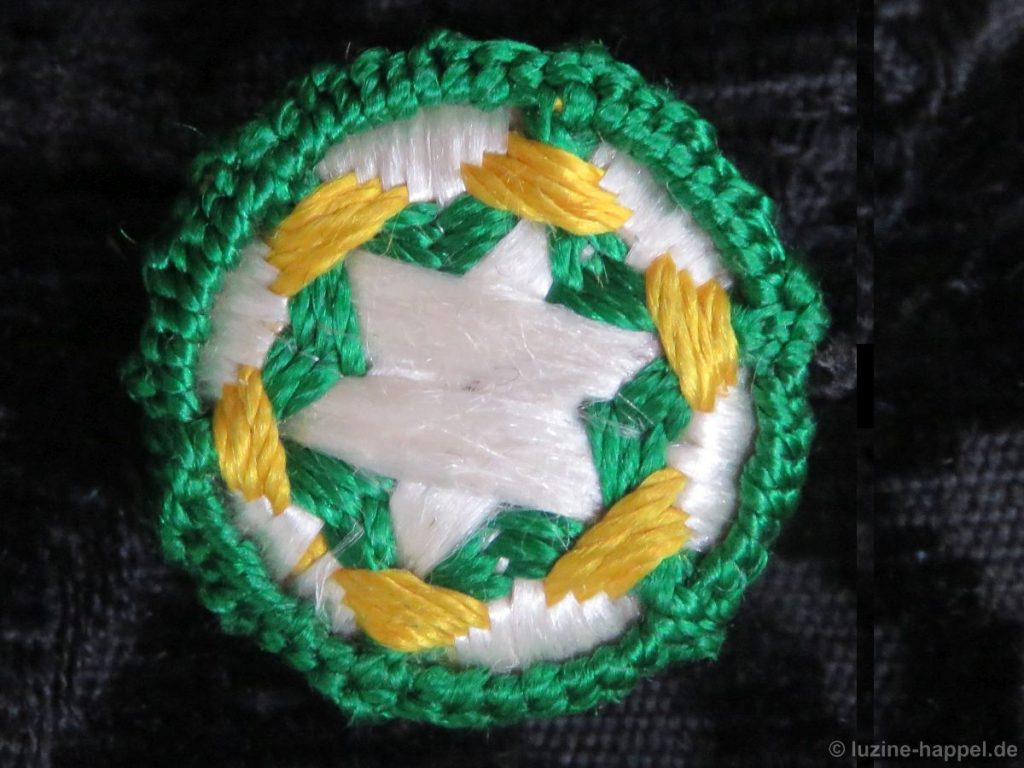 The other method used to create the star was to rotate the button 60° after every two wrappings.
This star was also held in place with Running stitches of different lengths. 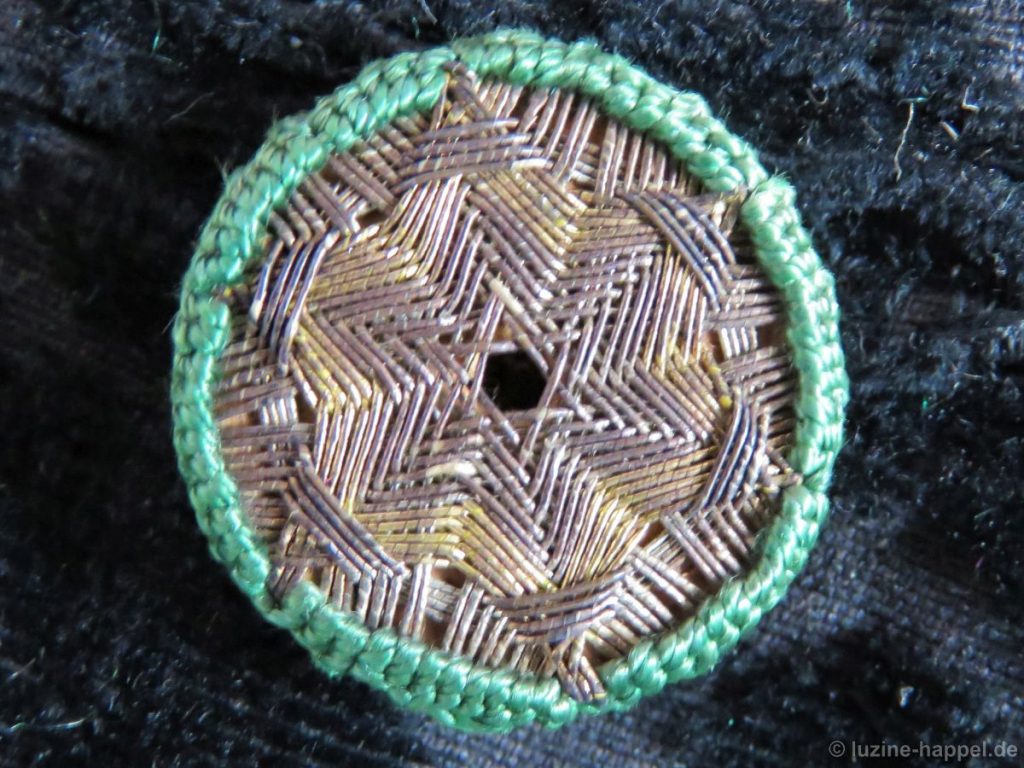 The metal threads tarnished over the years. But they can be polished with a special cleaning cloth for silver. 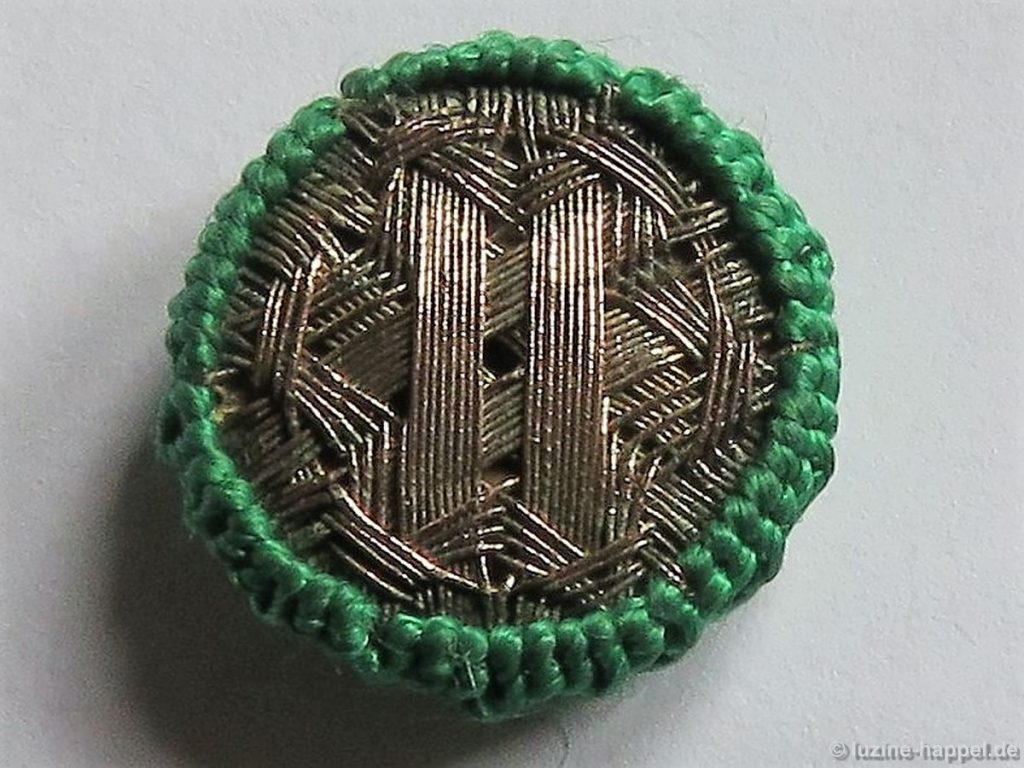 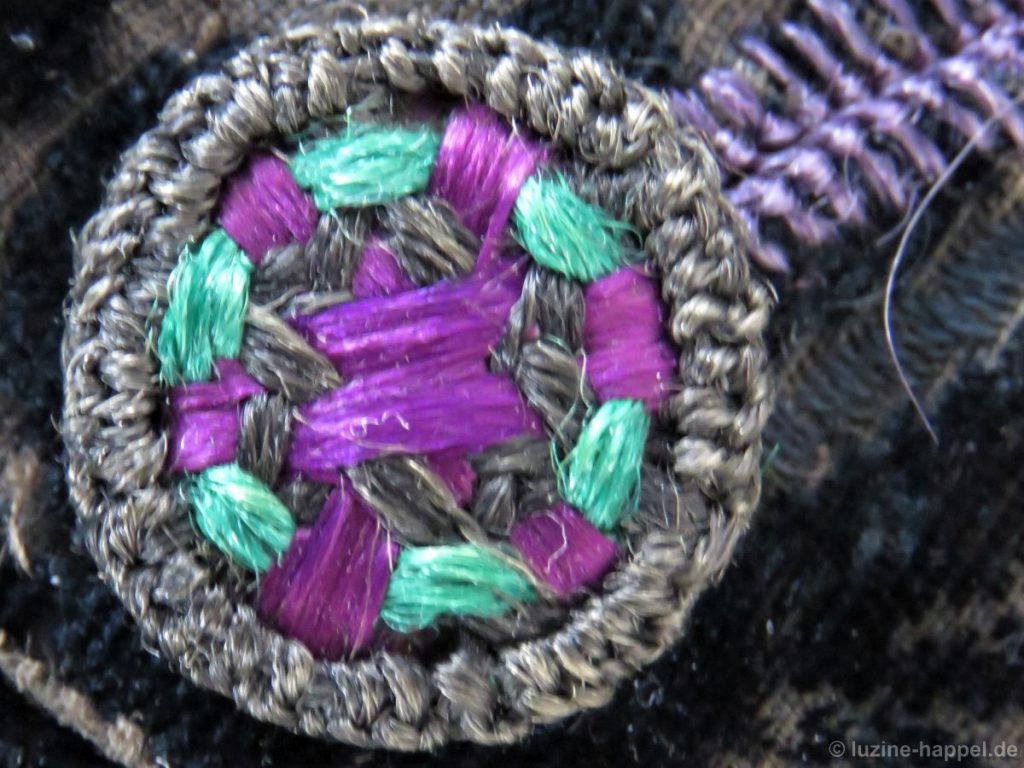 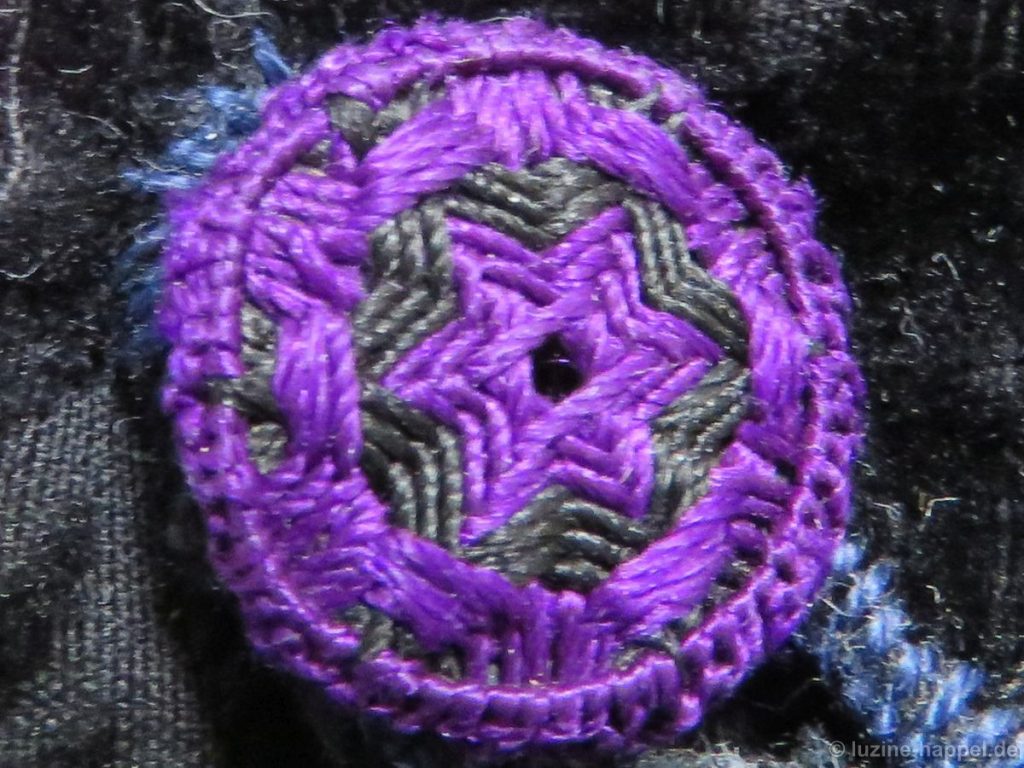 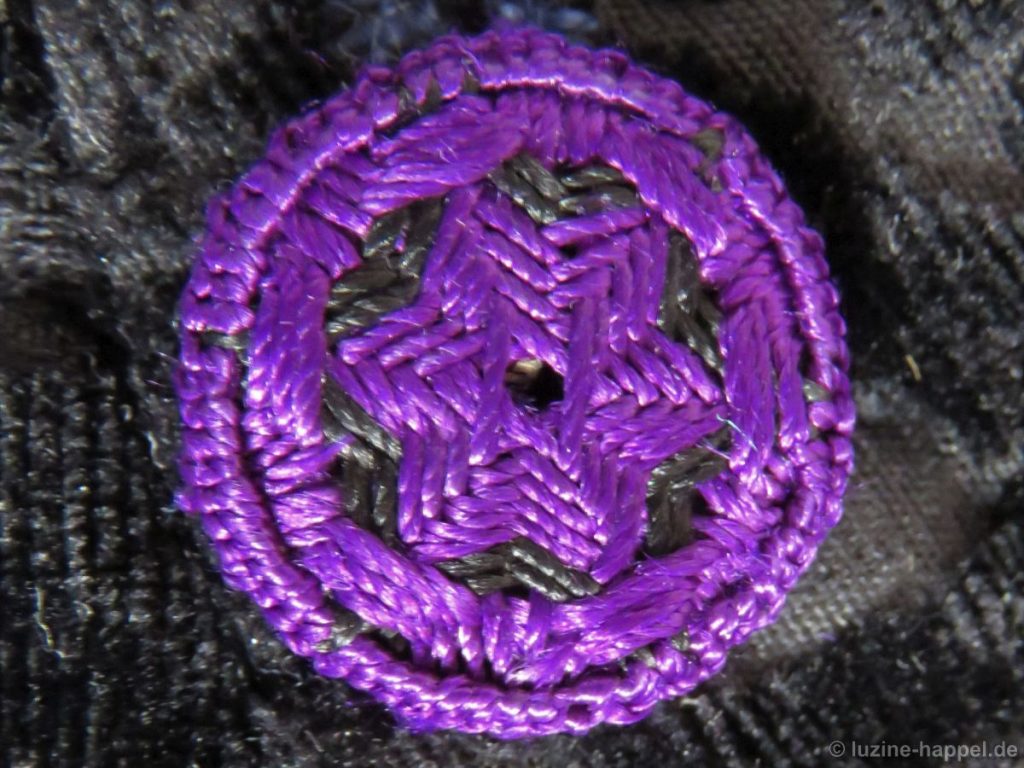 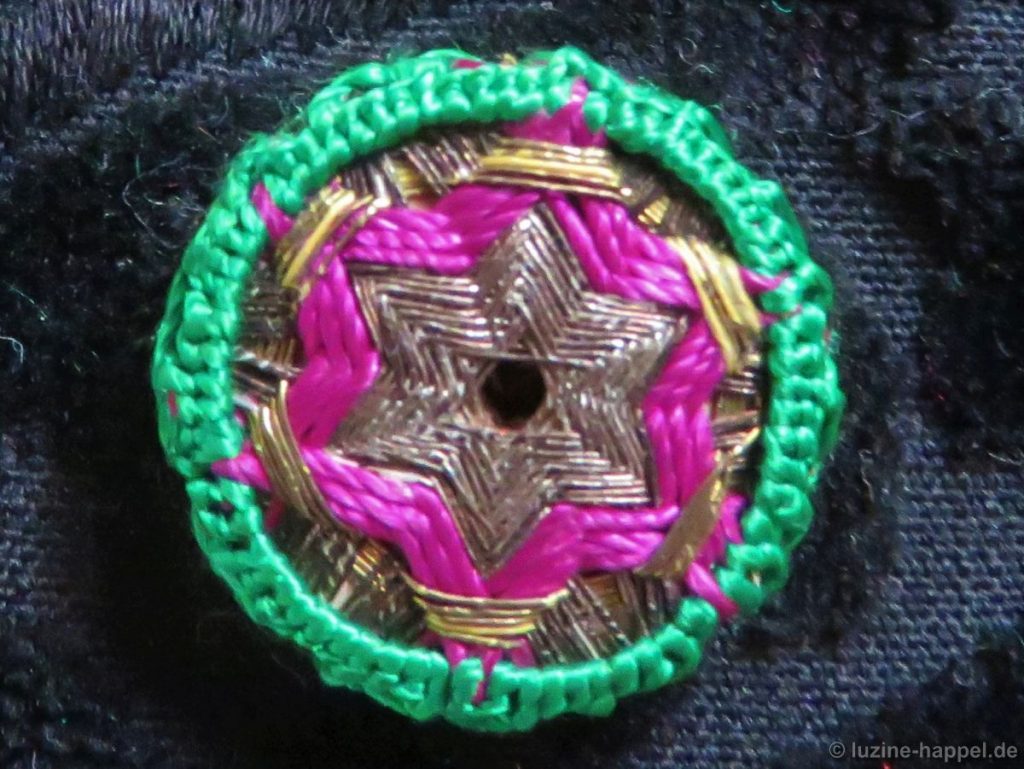 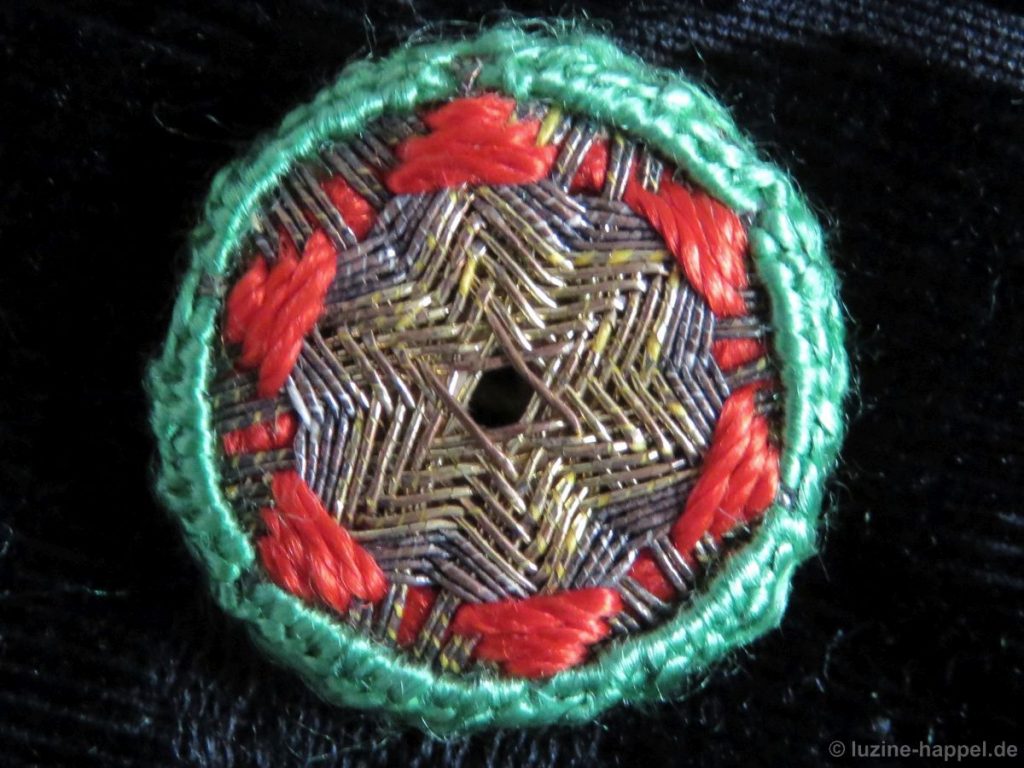 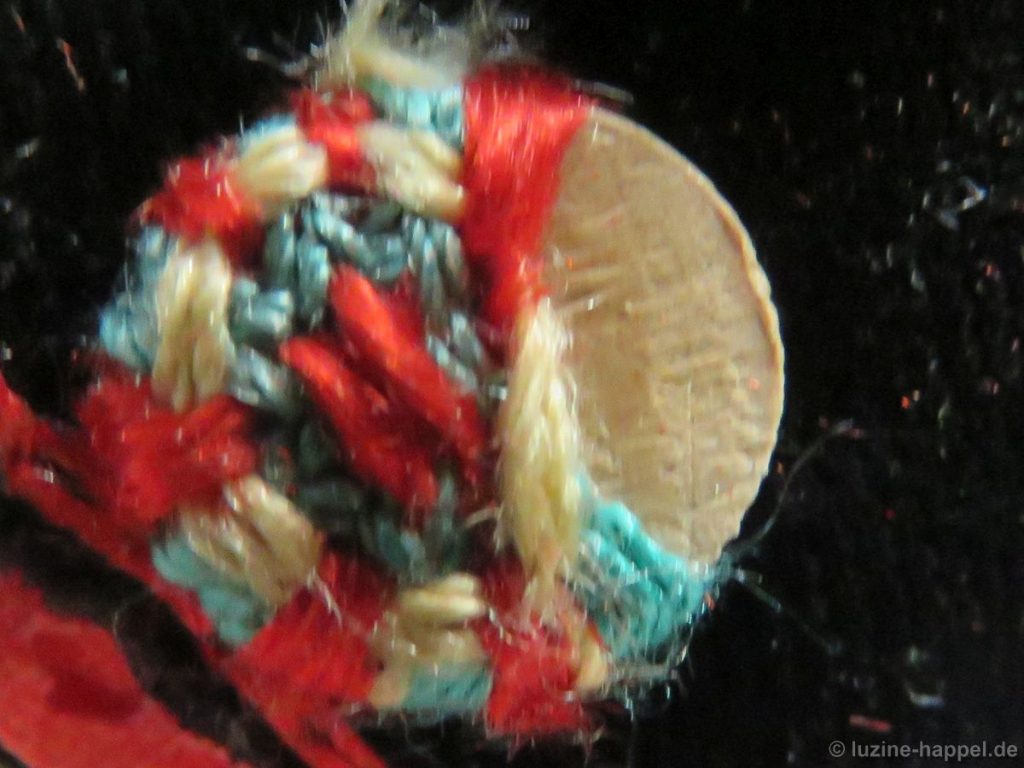 A damaged button shows the inner disc (image above) and the image below shows a similar, but undamaged, button. It is part of a child’s waistcoat. 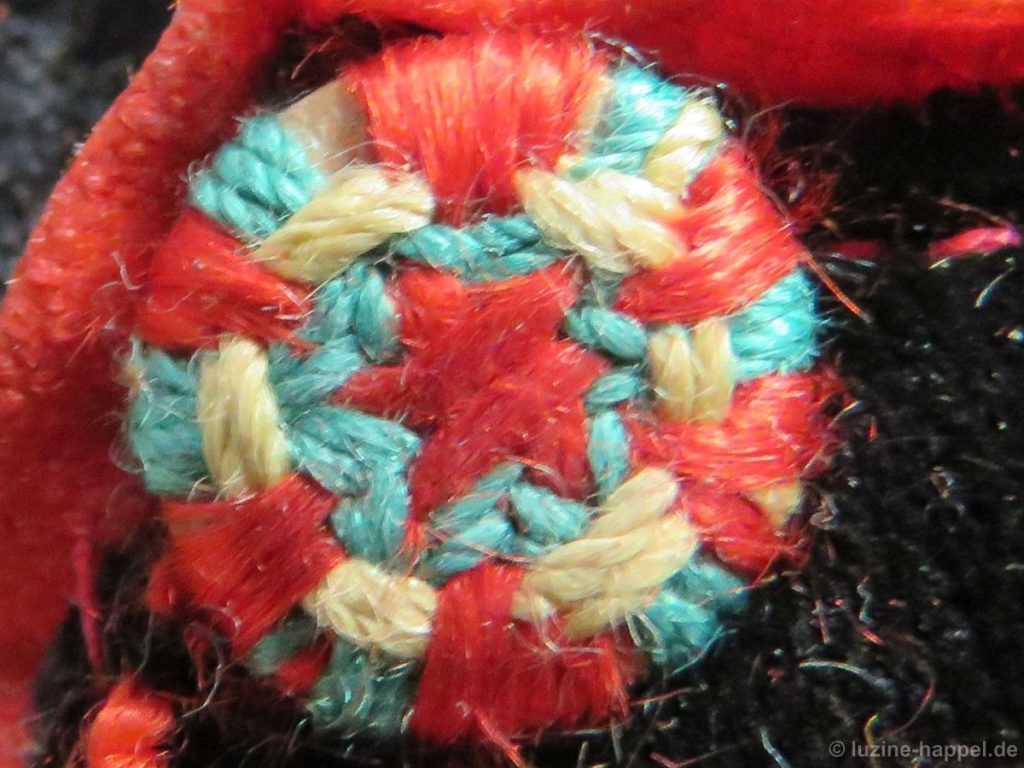