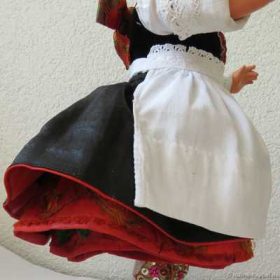 In addition to the dark aprons, white aprons were also a part of the Schwalm festive costume.
However, these were reserved for young girls up to marriage. They were worn on bright warm days in addition to the white bodices and the red costume. 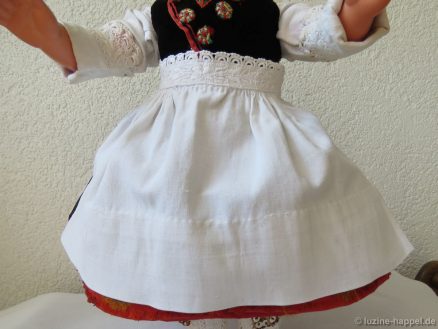 In the year 1941, Heinrich Metz (1897–1973), a pastor with a profound appreciation of Schwalm habits and costumes, made a survey of an average Schwalm bride’s trousseau. [Source: Schwälmer Jahrbuch 2000]

Regarding the aprons he found:

Although the basic construction of the white aprons was similar to the dark aprons, there were more elaborate details. For example, the two strips needed for the width of the apron were sewn together with a fancy seam. 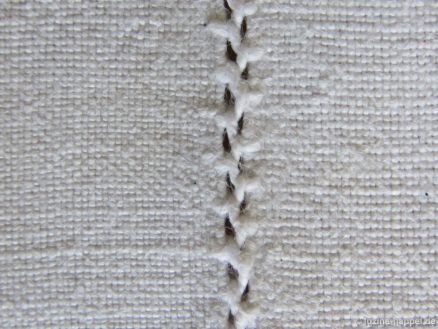 The aprons´ waistbands were embroidered with the finest whitework and additionally decorated with needlelace. 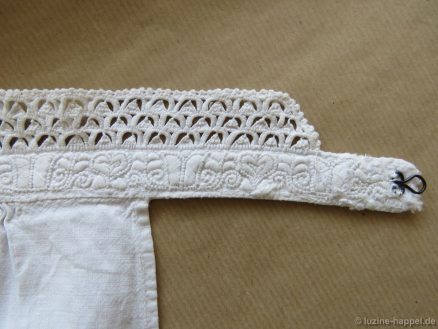 The hook-and-eye closure was covered with gold-plated clasps. 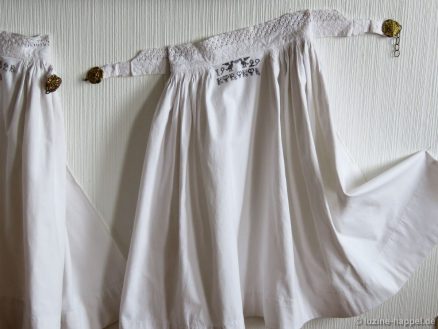 Often the initials of the owner and small ornaments were embroidered with Cross stitches on the flat middle sections at the waistlines of the aprons. 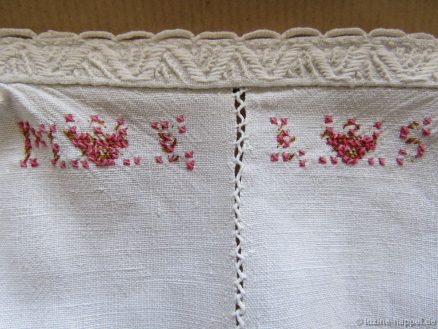 Sometimes the year was also added. 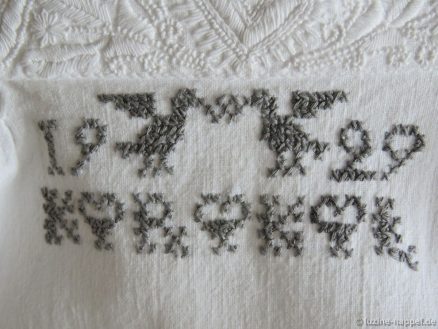 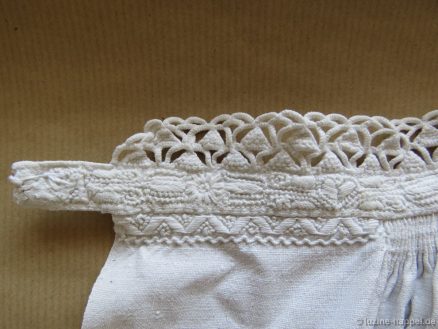 or on the flat middle section at the waistline. 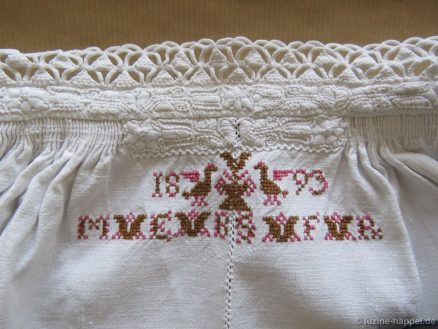 Between the flat sections, the apron was gathered with tiny pleats. 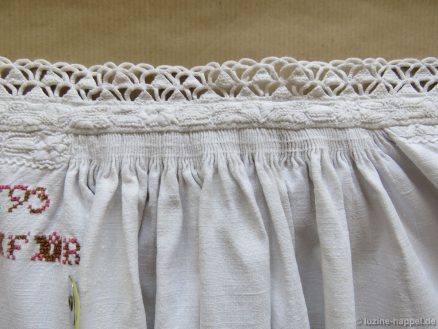 There are aprons with withdrawn thread work 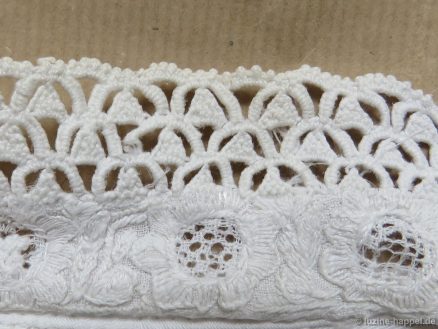 and some with patterns lying on top of the fabric, as seen below in the heart motif 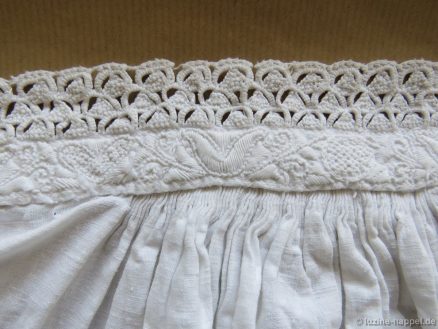 and in the circle motif. 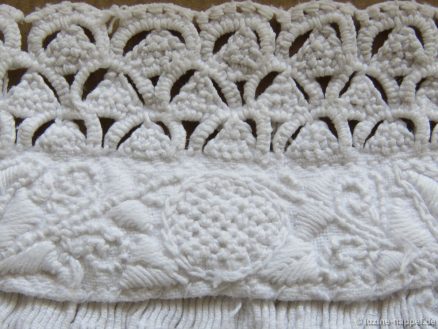 However, the most common were small borders embroidered with Satin stitches 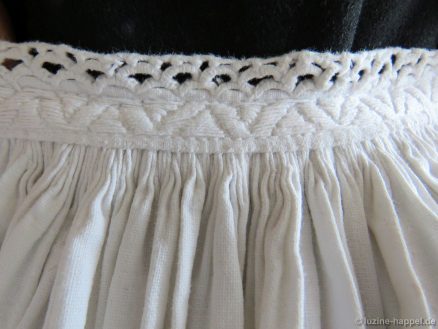 in many different patterns, 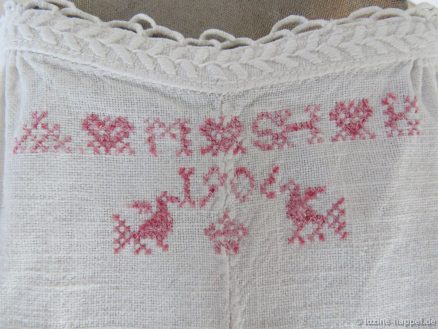 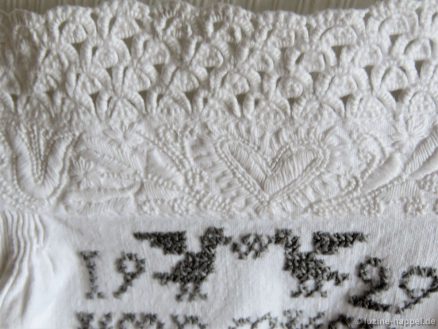 A large number of small border designs can be found in my publication Schwalm Curved Lines, Narrow Borders, and Ornamental Stitches. 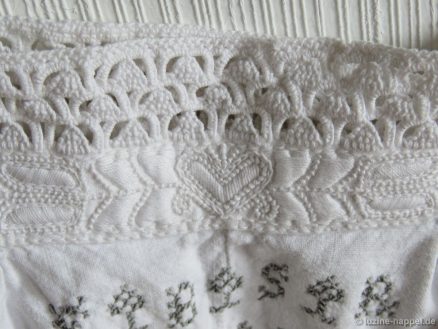 The needlelace was also worked differently and elaborately. 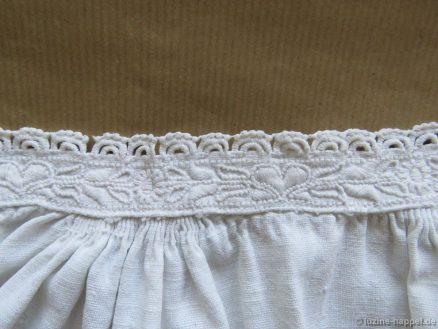 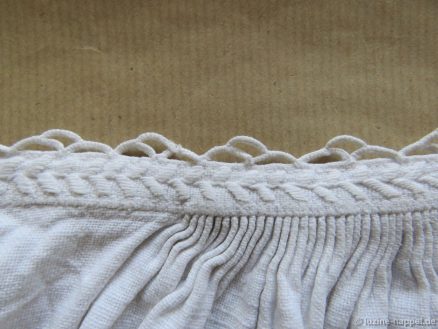 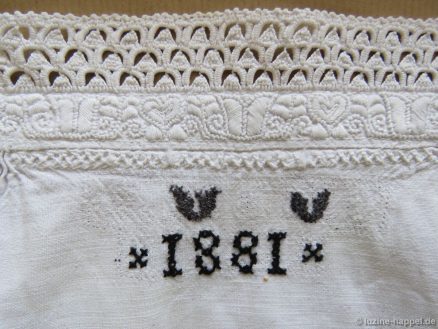 And finally, the costume consisting of the neat white apron, the black skirts, the black waistcoat, the white bodice, the red bottom edges of the skirts, and the red caps became very wellknown in the world as Little Red Riding Hood’s costume. 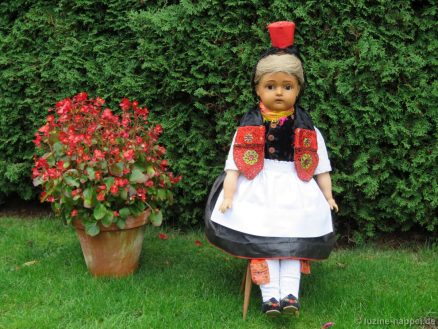