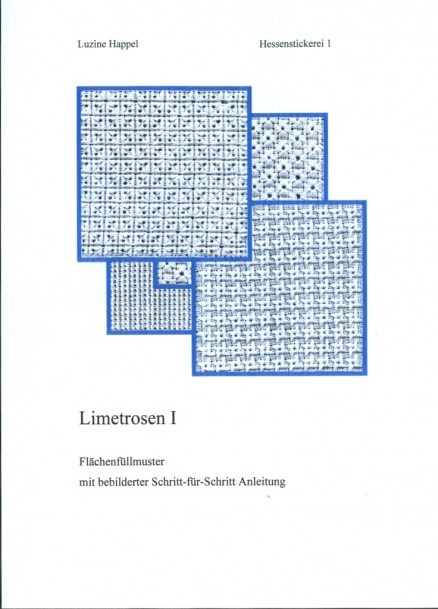 The “Limetrose” – also named Algerian Eye stitch or Square Eyelet – is a stitch wrapped around a centre. It is a traditional filling pattern of Schwalm Whitework. Also in this class of filling patterns are the double Square Eyelet, worked over two plots, and a pattern built by using a quarter Eyelet – named “small feather”, “feathers” or “Wing stitch” – here called “plumage” because it is mostly used for filling the wings of the birds.

New is the warped Eyelet. To get the Eyelet warped, on two opposite sides the embroidery thread crosses over only one plot (over three threads), and on the two other sides cross over two plots (over 2 X 3 threads).

Following the Limet grid, all those Eyelets are divided into parts. Using these parts, new patterns are created. Working these patterns, a lot of thread is lying on the top of the fabric, so these patterns end up looking three-dimensional and they develop a brilliance that plays with the light.

In this book are 68 patterns, all described in easy to understand step-by-step pictures with few words.

There are tips for efficient working order and for choosing the right pattern for a specific motif.

All patterns included can also be used for pulled thread work.

One can look into the book in “shop”.