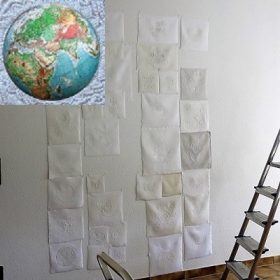 Before starting the assembly process, I laundered all the contributions one more time – piece by piece. Some pieces were very heavily starched, others not at all. I wanted to create the same conditions for all embroideries. Since I often have to pick up the pieces while putting them together, creases cannot be avoided. For the final ironing, I’ll use starch spray.

After washing, I ironed all the embroideries very carefully. 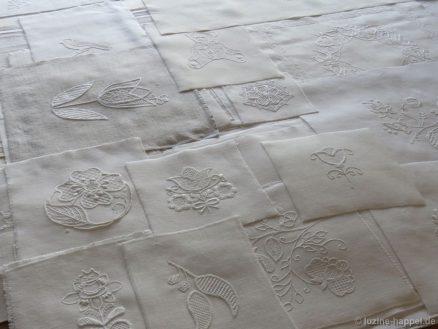 When the valuable works lay spread out in front of me and showed their full splendor in the light of the autumn afternoon sun, I was once again reminded of the huge responsibility that I had undertaken in putting them together.

A paper plan with reduced images of the embroidery is one thing, seeing the originals is quite another.

Since I don’t have a table that is big enough to hold all the embroideries spread out next to each other, and since I can’t work on the floor, I cleared a wall so that I could temporarily pin the pieces there based on my plan. 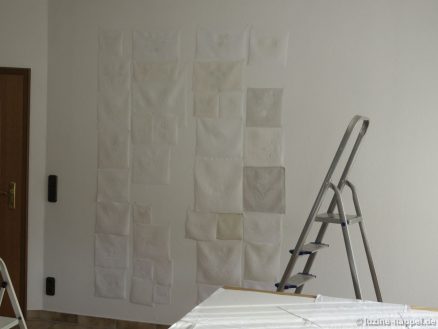 After only a few minutes, the disenchantment came: Because I was working with black and white paper templates, I did not think to pay attention to balancing the distribution of differing shades of white linen – some were bright white, some grayish, and others more yellow. But even worse was the fact that the targeted height was too great! 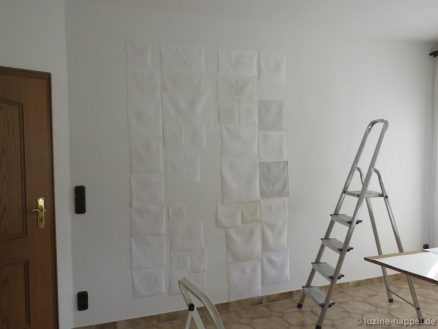 My workroom is higher than the standard dimensions for rooms in Germany, and the sampler’s wide border still has to be considered!

So, I must start all over again with puzzling and planning. 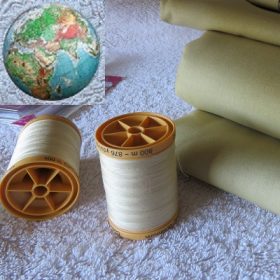 At the beginning of the Global Schwalm Sampler campaign, Grit Kovacs promised to help me assemble the many individual parts. I am very grateful to her for that, but now I’ve decided to attach the connecting strips on the back with hand stitches. However, that’s about 50 meters, and I need more than an hour for one meter – I can’t ask anyone to do this kind of work for me. Since machine and hand sewing have to be done alternately and we live too far apart, I also have to do the machine sewing myself.

Grit is still very helpful and is at my side in an advisory capacity. She took a lot of time to deal with my problems and answer all of my questions. She loaned me her original fabric sample card to select the fabric color for the connecting strips and provided me with pieces of fabric to test. As a result, I was able to decide in peace and quiet and put together my material list.

Now the package with my orders has arrived. In addition to a few utensils that I didn’t have on hand, it mainly contained the right sewing thread and the fabric for the connecting strips. I will need at least 10 meters of fabric with a width of 1.10 m, but I have ordered a few more meters to be on the safe side. 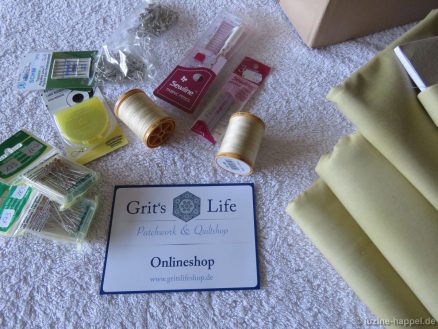 For the colour, I decided on a medium beige-gold tone – a subtle colour that will clearly subdivide the sampler and yet be unobtrusive. 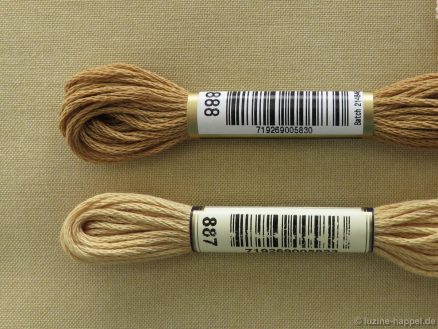 Now the sewing can begin. 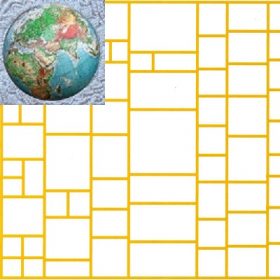 With my scaled down paper templates, I tried out different arrangements.

Please remember the guidelines I set: The inner part of the sampler containing all the contributions should not be higher than 2.10 m. Similar motifs should be distributed as evenly as possible over the area. And the whole thing should end in a rectangle that is completely covered with the donated contributions without gaps.

Arranged in strips, the parts are easiest to join together to form a rectangle. The strip division also has another advantage: the finished sampler can be easily folded up for shipping without the embroidered parts getting creases. 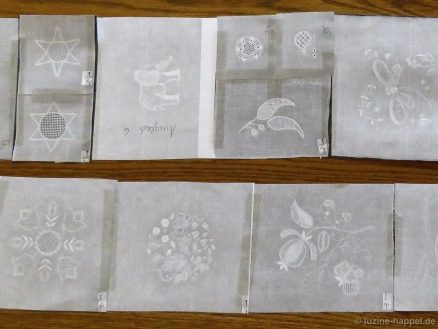 Since the rectangle will be wider than it is high, I decided to use vertical stripes. After endless hours of puzzling, trimming, assembling, and discarding, I finally had the solution – at least on paper. All 92 embroideries fit seamlessly into a rectangle. Then the inner part of the sampler is about 2.04 m high and about 2.84 wide. There will be a circumferential edge of about 16 cm in addition.

Using my paper templates, I made a rough, not 100% accurate, graphic representation to get an impression of the finished sampler. The width of the dividing lines that can be seen is roughly true to scale. 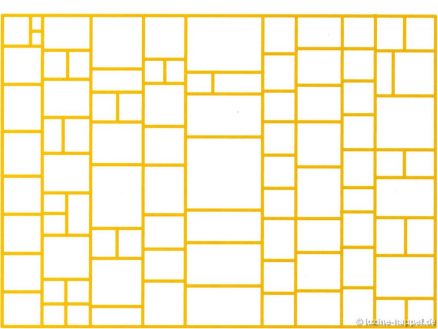 I am happy that I have completed this important step!

Now I can calculate the amount of material needed and look around for suitable fabric for the connecting strips. 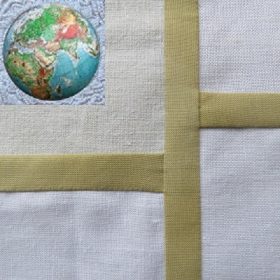 The task of assembling the embroideries contributed to the Global Schwalm Sampler and finishing the sampler is now imminent.

I would like you to participate in this process, too.

After publishing my first considerations for assembling, I received many suggestions and valuable tips. Thanks for that!

In the meantime, many more tests were carried out and now the decision has been made.

My originally favored variant ( items 6 and 7 seen here) was first refined and then discarded. On the one hand, despite careful work, the meeting points of the connecting lines do not appear clear and “clean.” In addition, both the zigzag and the Herringbone stitches are elastic. It could happen that the hanging cloth warps under its own weight. Another essential point was the calculation of the seam allowances (e.g. if I wanted to arrange several small parts next to a large one).

So the variant shown in item 4 moved back into focus. However, in the meantime I had thought of covering the seam allowances on the back with a strip. But since I didn’t want any visible machine stitches, I thought I’d have to sew the strip on both sides by hand. (The average size of the 92 items is 26.22 cm X 27.04 cm. Since on each item there is a length and width side that requires a strip, this would be 50 meters of strip for the back alone and thus approximately 100 meters of hand sewn seams in all.)

The advice (using a hand seam only on one side of each strip) of an experienced blog reader helped me and encouraged me to use the variant below for joining the individual parts. 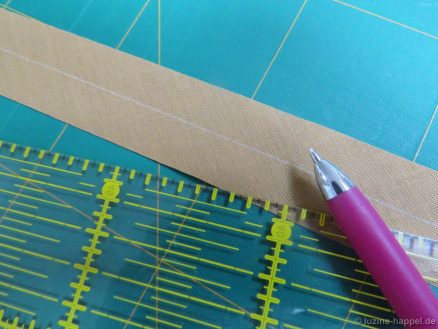 To do this, the strip on the back is first marked along the longitudinal center axis, one long side is placed exactly on the marked line and the fold is ironed. The ironed fold makes sewing by hand later much easier. 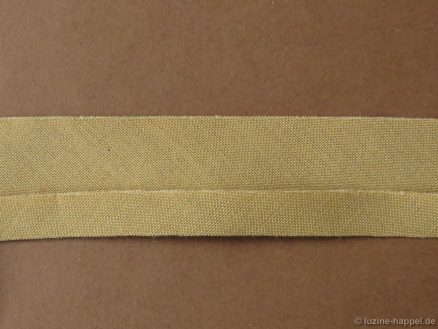 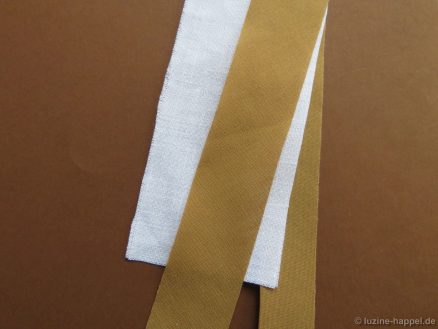 All three are sewn together with the sewing machine. 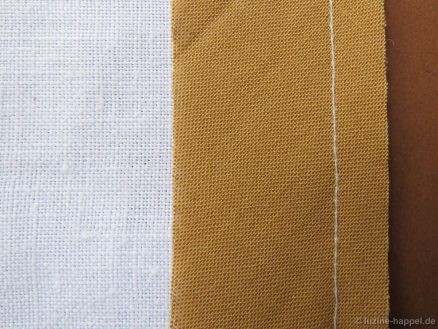 The upper strip is pressed over to expose the right sides of both the strip and the embroidery piece. 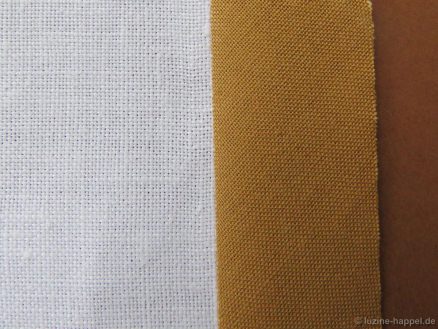 The next adjacent embroidery is placed face down, edge to edge, over the front side strip 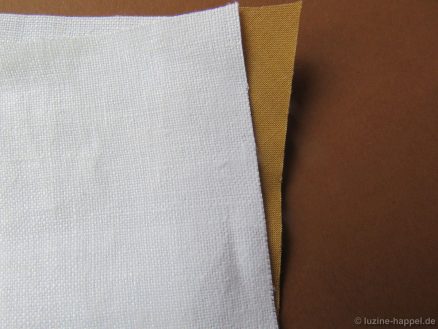 and sewn together with it. 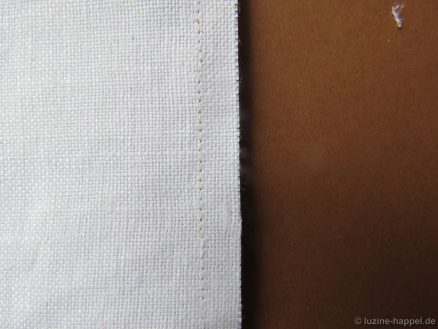 The seam is smoothed out. 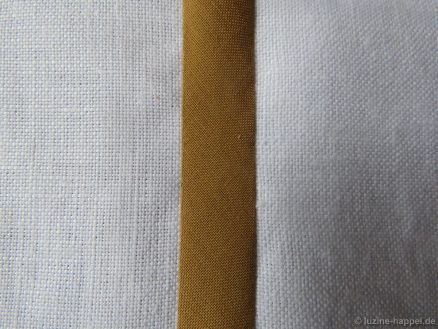 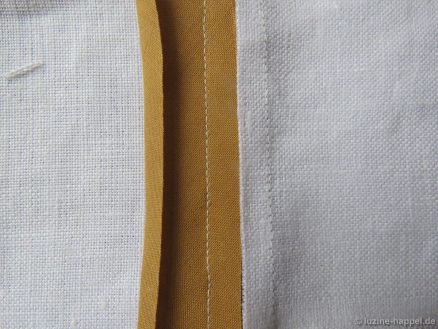 Now the back strip is folded over to conceal the seam allowances. The seam is smoothed out. 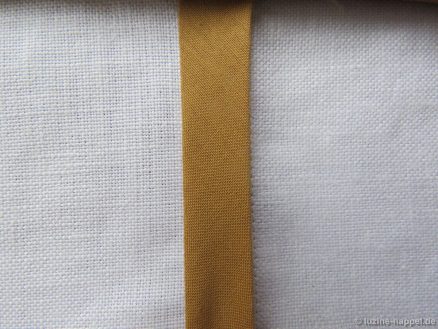 At the end, the back strip is attached to the existing machine stitches with fine hand stitches. 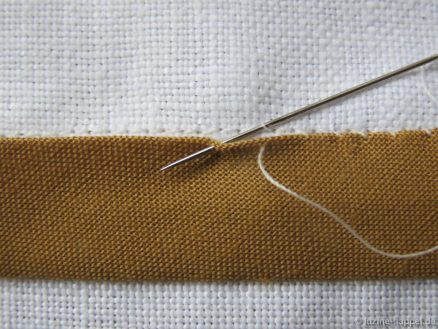 In this way a stable connection is established that does not affect the character of the embroidery – even allowing a view of the reverse side. This strip connection creates both a neat front 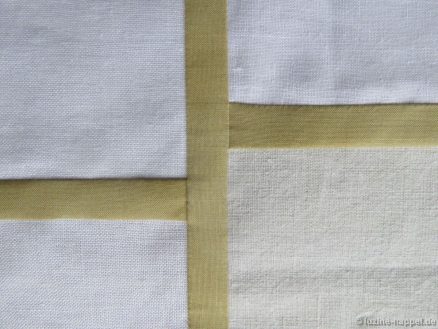 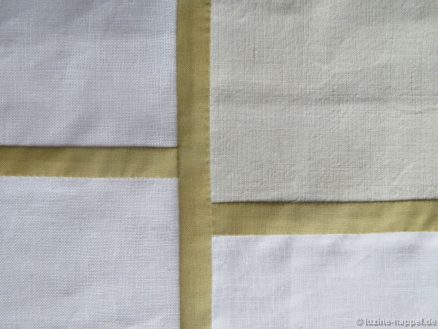 The big advantages are that the pieces can be put edge to edge for puzzling out placement and one doesn’t have to worry about additional seam allowances. 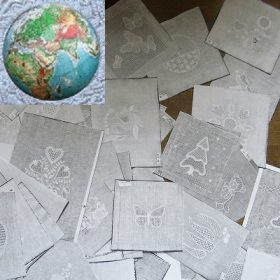 Now my readers look forward to seeing all ninety-two pieces of Schwalm Whitework from different parts of the world sewn together to make ONE.

But how does that work?

The pieces could be put together in the style of the Korean patchwork bojagi. Then all the contributed projects would keep their actual size. But that’s too complicated for me as a layman.

Very few of the ninety-two embroideries are the same size. And the sizes of all the rest are very different. Some have a generous unembroidered border that allows something to be cut off, and others have a margin that is so small it is imperative that nothing be trimmed.

First I made scaled down paper templates to try out different arrangements. And so to not make the composition unnecessarily tricky, I decided on a connection that does not require an additional seam allowance calculation (more on this in a future post).
In this way, the individual parts can be placed next to one another without gaps or overlapping. So I can test the distribution of the motifs and see which parts can be trimmed in length or width in order to better connect them together. 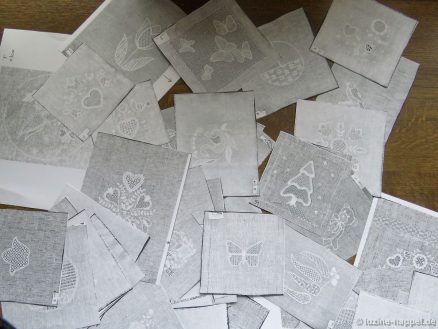 The guidelines I set: The inner part of the sampler containing all the contributions should not be higher than 2.10 m. Similar motifs should be distributed as evenly as possible over the area. And the whole thing should end in a rectangle that is completely covered with the donated contributions without gaps.

In case you want to puzzle it out yourself, please email me your request, and I will email you a prepared three-part pdf document containing all the single pieces.

You can view all contributions again by browsing from Update 25 down through all the other updates to Update 1.