The Symbolism of the Motifs Found in Schwalm Embroidery

The Schwalm region, from which traditional Schwalm embroidery came, was rural and Protestant. This history influenced the symbolism of the motifs used in the region’s famous embroidery. Although the motifs symbolized certain values, the symbolism was incidental. Motifs were and are today mainly chosen for aesthetic and design reasons.

The main motif in Schwalm embroidery is the heart – the domicile of life and the symbol of love. Assumedly, it was originally embroidered as a vessel, from which the Tree of Life grew after being supplied with life-giving water. (The triple shoot stood for the Trinity, and the Tree of Life stood for a long life and eternity.)

Sometimes the heart, often used as a base for the triple shoot, was replaced with a basket

The heart is closely followed by the tulip motif – the symbol of affluence. The tulip was also seen as a modified Tree of Life and, because of its three points, a symbol of the Trinity.

Other important motifs were circles. Having neither a beginning nor end, they were symbols of perfection and eternity. Suns represent the source of life-giving light and also Jesus Christ.

And the sunflower symbolizes long life.

It is said that the bird motifs represent sparrows symbolizing fertility.

Similarly, the pink – reference to Jesus Christ – was well liked in early Schwalm whitework. However, because of the difficulty to fill small detailed areas, it was eventually only used as a figural filling pattern. 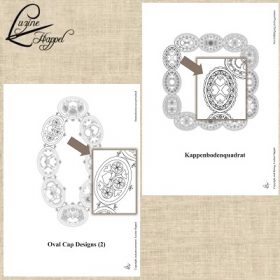 Drawing on the rich designs found on cap bottoms as inspiration, I asked the designer Christa Waldmann to draw outlines for whitework; she created some beautiful designs.

Using these motifs, three different projects have been embroidered so far: a pretty table runner, 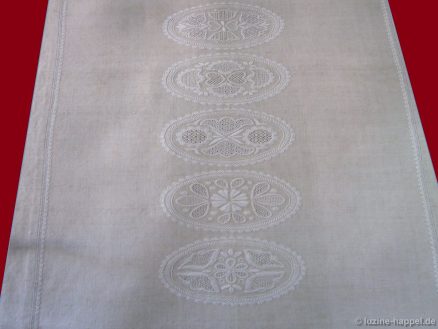 a nice pillowcase and my favorite piece, a fancy tea cloth with scalloped edges. 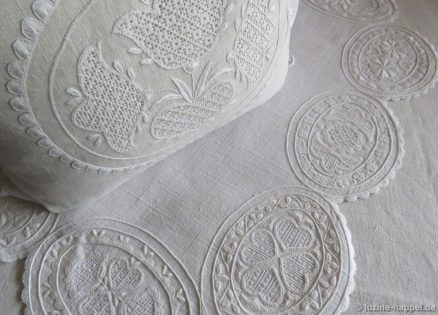 Of course there are many other possible layouts for gorgeous Schwalm projects.

I am so happy with these special designs, and I think you will be, too.

There are three different series: 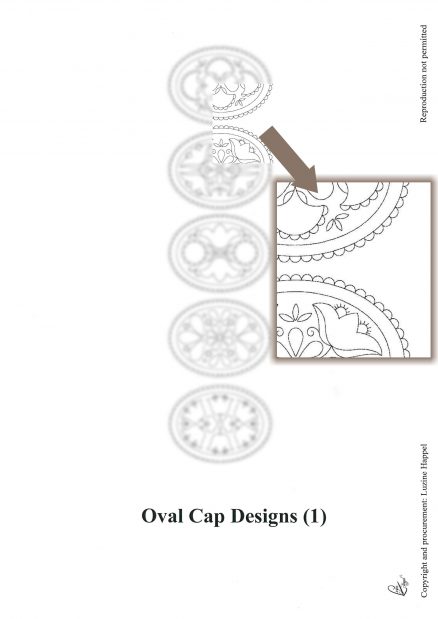 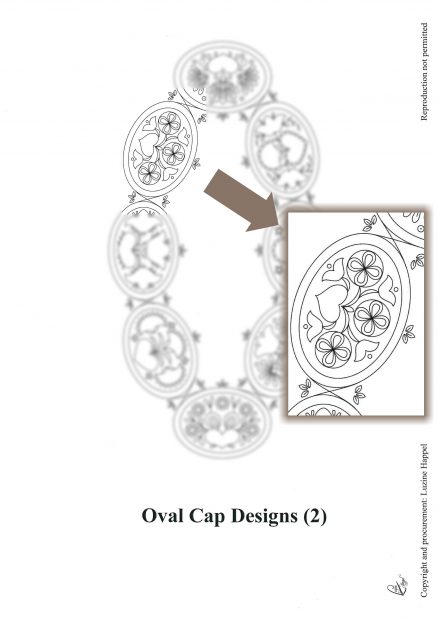 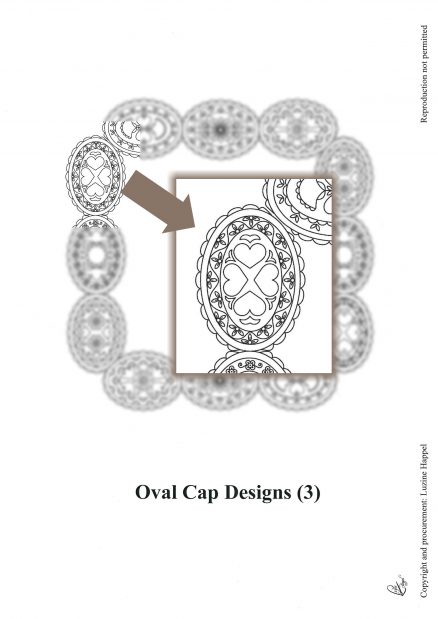 Per my request, a brilliant Schwalm designer – Christa Waldmann – made the hand drawing of the beautiful design featured in the framed Schwalm sampler article. Another designer then transferred the hand drawing into a graphic. Now it is ready for all to enjoy as a downloadable document.

The six-page document presents the entire design in its original size with an enlarged picture of the needle-weaving band. 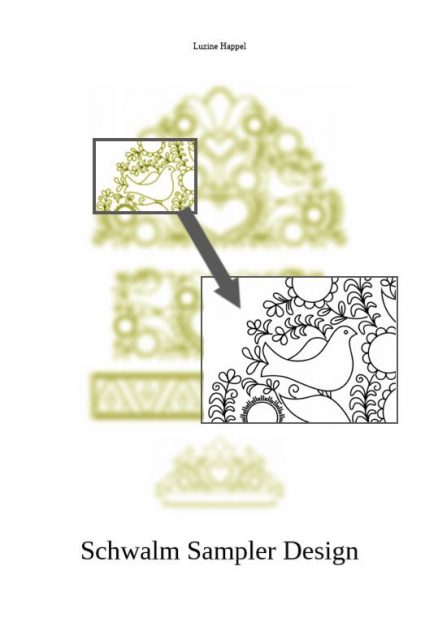 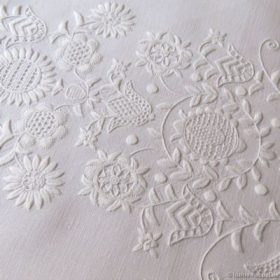 It makes my day every time I view this very special table runner. 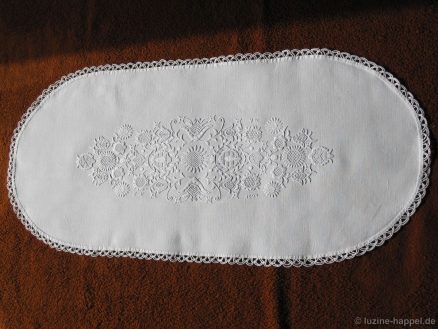 The excellent design is from Barbelies Schäfer. The design incorporates traditional patterns and was part of adult education classes. Irmgard Mengel embroidered it perfectly. 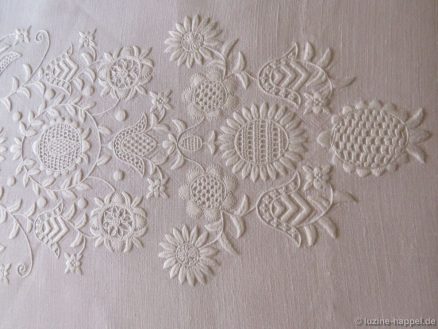 On the very fine linen, the “old” filling patterns, in combination with the raised whitework, are especially effective. 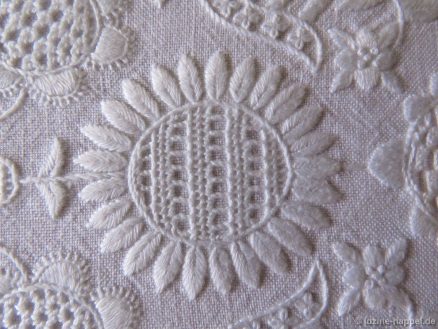 Although early Schwalm whitework does not include withdrawn-thread patterns, 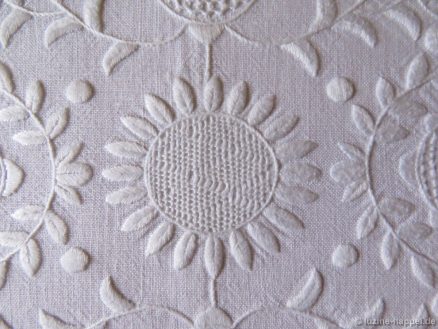 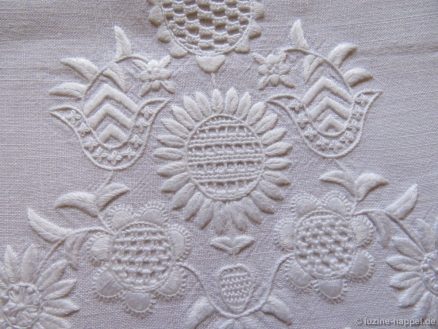 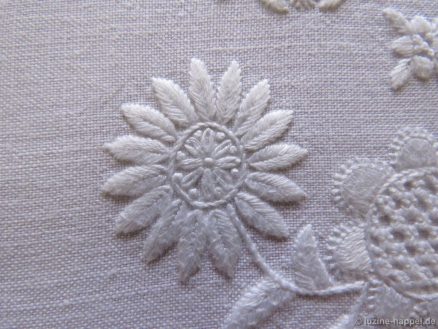 there are Chain stitches in many variations and Satin stitches. 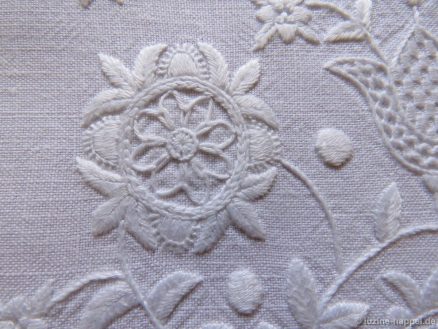 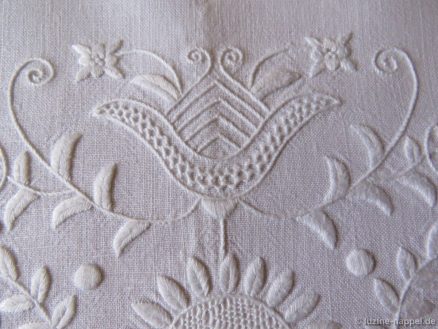 and the perfection of the leaves. 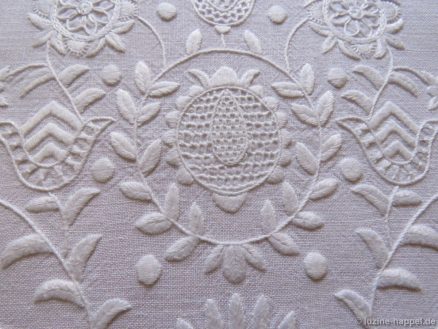 This is an absolutely thrilling pattern that has been turned into a truly spectacular example of excellent needle art by Irmgard Mengel! 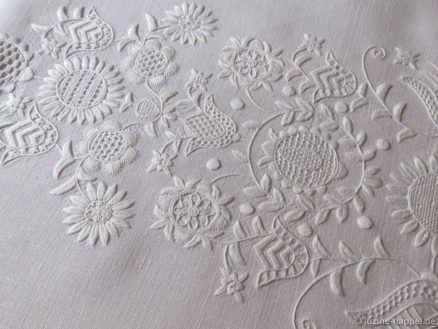 If you would like to try your hand at this technique, you can get this design printed on linen by Irmgard Mengel. Please email me with your request.

Deeply impressed by the beauty of the apron square designs and the number of wonderful patterns that can be created using the same main motifs over and over again, I looked for a way to modify and then apply these designs to contemporary whitework designs. With the help of my designer, I have produced seven beautiful square designs. I have shown a variation of one in a previous article. It is a design axially symmetric; all others are centrically symmetric.

The designs measure 18 cm X 18 cm each, but it is possible to enlarge them. They are pretty made up as pillowcases, square doilies, and table runners. I am using five of the designs on each side to embroider a large tablecloth. Unfortunately it is not yet finished, so I cannot show a picture.
However, it looks like it will turn out very pretty. In addition to the pillowcase I showed in the previous article, I could finish six more square pillowcases using the centrically symmetric apron square designs. 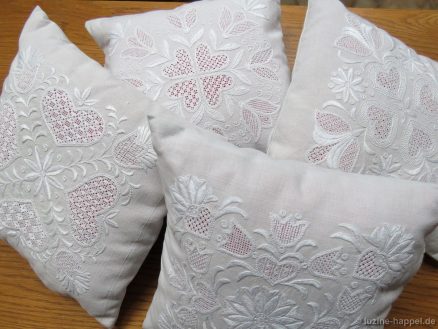 The designs are beautiful. 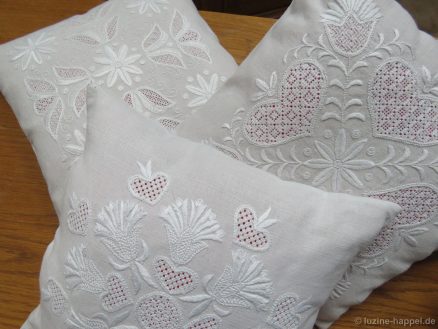 The shapes are large enough to accommodate a variety of filling stitches or patterns. And the added Satin stitch embroidery makes a nice contrast to the drawn thread work areas. 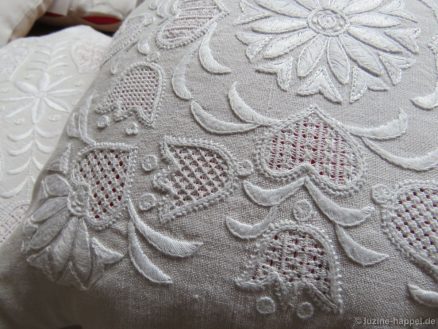 Did I whet your appetite for more beautiful Schwalm-inspired designs?
I now offer the 7 designs + 1 design variation as a document for downloading. 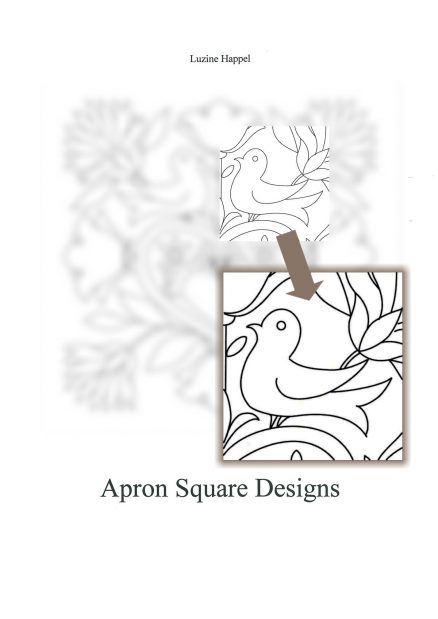